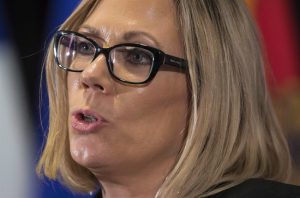 Manitoba Minister Rochelle Squires responds to a question during a news conference after a Canadian Council of Ministers of the Environment meeting in Vancouver on November 3, 2017. (THE CANADIAN PRESS/Darryl Dyck)

WINNIPEG — The province is spending $4 million to upgrade security at Manitoba Housing properties.

“Our government has invested more than $6.9 million in security upgrade projects over the past three years and these ongoing, targeted investments have resulted in safer homes for Manitobans.”

Squires says security calls at Manitoba Housing have dropped by 25 percent over the past five years and said the funding will address the ongoing challenge of petty trespassing.

The province announced $31 million in social housing improvements last July, which complement the Housing Communications Centre, which operates 24 hours a day, seven days a week to respond to concerns from tenants including security issues. Manitoba Housing also provides security services at selected properties throughout the province, including a 23-member mobile security service.