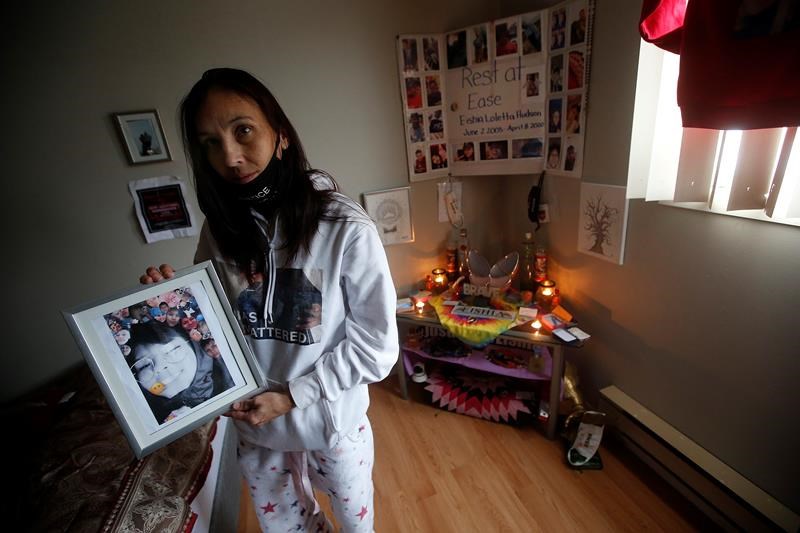 Christie Zebrasky, whose daughter Eishia Hudson was shot dead by police on April 8, 2020, is photographed in her bedroom with her daughter’s ashes and memorial in Winnipeg, Friday, December 11, 2020. (THE CANADIAN PRESS/John Woods)

WINNIPEG — A police officer will not be criminally charged for fatally shooting an Indigenous teenager who was driving a stolen vehicle last spring.

The unnamed Winnipeg officer fired two bullets at Eishia Hudson, 16, after a police pursuit that ended with officers surrounding the vehicle on foot as it continued to move, the Independent Investigation Unit of Manitoba said in a report Thursday.

The unit’s civilian director said video taken by a driver stopped at a nearby traffic light showed officers were in danger of being hit by the vehicle.

“We are of the view that there is no factual or legal basis to lay any charges against (the officer) for his involvement in this matter,” the report quotes the prosecution service in its conclusion.

Hudson’s father said the report was a whitewash and called for a public inquiry into police shootings of Indigenous people. The girl was one of three Indigenous people shot by Winnipeg police in a 10-day span.

“All of this shows the sad reality of how systemic racism runs strong within our justice system,” William Hudson said.

He said there were problems with the investigation, including the unnamed officer who fired the shots not being interviewed. He gave a statement and provided his notes.

“For generations now, there is an onslaught of violence that is perpetrated against the bodies of Indigenous women and girls and two-spirited,” she said.

While there are no plans for a public inquiry, the shooting will be the subject of two more-narrow reviews.

An inquest, led by a provincial judge, is expected in the near future and is to look at the details of what happened. Manitoba’s advocate for children and youth has said her office will also investigate.

Hudson’s death came after police responded to a report of a liquor store being robbed by several teens who threatened to harm store workers and fled in a stolen vehicle.

Officers pursued the Jeep as it struck one police cruiser, crossed over a median and crashed into the truck, police said at the time.

The video taken by a nearby driver and posted online shows the Jeep veering into oncoming traffic and hitting a truck before officers surround it. Two loud popping sounds are heard soon after.

The investigation unit’s report said officers, along with some civilian witnesses, said the Jeep continued to move as those inside were ordered to stop and get out.

The report said an expert from Alberta on use of force was consulted and concluded that officers were right to draw their weapons.

“I am of the opinion that since this was a high-risk arrest, with offenders who had just committed a commercial robbery and had threatened to stab the victims, the officers were correct to be concerned that a lethal-force threat could suddenly arise,” the expert says in the report.

Winnipeg’s police chief said the death was a tragedy.

“On that day, Eishia got caught up with a bunch of kids in a stolen vehicle, and things escalated. A lot of people were put in harm’s way, including the kids in the stolen vehicle, innocent bystanders that worked in the liquor store or happened to be in traffic, and the police officers who were trying to intervene,” Danny Smyth said in a statement.

“The circumstances led to a split-second decision to use lethal force to stop the scenario from escalating further. All of us would have liked the outcome to be different.”