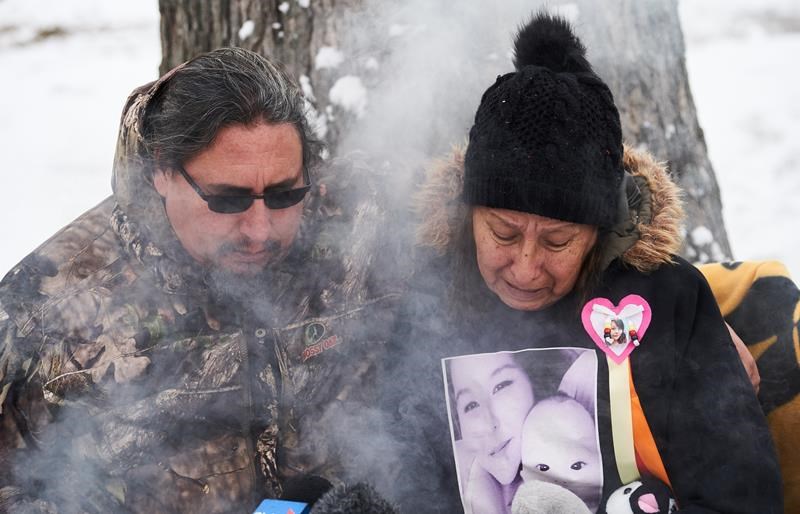 Candy Volk holds a picture of 10-month-old Anthony Dethmers and his mother Jennifer Dethmers, who both died when a truck fleeing Winnipeg police collided with their vehicle in September. Volk, the child’s grandmother, is comforted by her cousin Colin James at a news conference in Winnipeg on Oct. 28, 2020. (THE CANADIAN PRESS/David Lipnowski)

WINNIPEG — Manitoba’s police watchdog is not recommending charges against Winnipeg officers in an attempted traffic stop that led to a collision that killed a mother and her infant son.

Jennifer Dethmers, who was 30, died last September when the van she was in was hit by a truck that Winnipeg police said was speeding away after officers attempted to pull it over.

Ten-month-old Anthony Dethmers, who was called A.J., died a month later from injuries related to the crash.

The Independent Investigation Unit of Manitoba spoke with officers and witnesses, and reviewed police audio transmissions and GPS records.

In a news release, the unit says there was no evidence that any actions by the officers contributed to the collision.

The full report into the crash will not be released until the truck’s driver has gone through court.

The investigative team said Wednesday that a police traffic unit attempted to pull the truck over around 1:30 p.m. on Sept. 26. The truck sped off.

Moments later it collided into a van carrying Dethmers and her son.

Dethmers’ partner and stepdaughter were also in the van. They were taken to hospital following the crash but have since been released.

Her family has said she was excited to become a mother. She had already decorated her home for Halloween and purchased gifts for her baby’s upcoming birthday and Christmas.

Dethmers died the day of the collision, but Anthony remained in hospital until he died on Oct. 28.

“He was brave and he was strong and he had so much courage,” Candy Volk, Anthony’s maternal grandmother, said following his death.

“But that accident caused so much damage to his little body that he couldn’t fight it.”