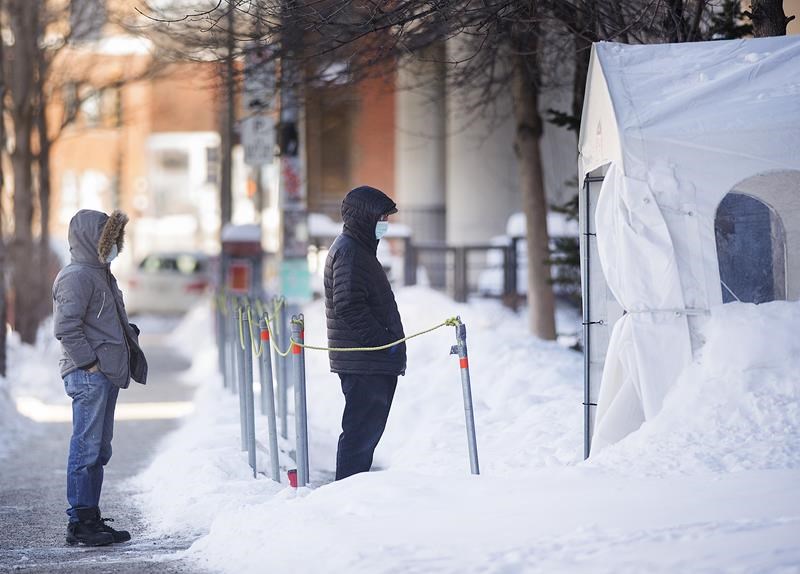 People wear face masks as they wait to be tested for COVID-19 at a clinic in Montreal, Sunday, January 31, 2021, as the COVID-19 pandemic continues in Canada and around the world. (THE CANADIAN PRESS/Graham Hughes)

Canada’s official COVID-19 death toll surpassed 20,000 on Sunday as flights to major sun destinations were grounded in an effort to limit further spread of the virus.

The sobering figure emerged after Quebec and Ontario reported 31 and 43 new fatalities respectively related to the virus. That tally climbed later in the day when Manitoba and Saskatchewan each logged four new associated deaths, and Alberta added eight.

Canada has now recorded 20,032 deaths since the first case of COVID-19 surfaced in the country just over a year ago. The country’s first COVID-19 death was reported on March 9, 2020.

An average of 138 people with COVID-19 have died each day over the past week.

But she’s warned that it’s still too soon to lift widespread public health restrictions, saying the virus is still spreading rapidly across parts of the country.

She issued a statement on Sunday urging Canadians to follow public health rules in order to support front line health workers, who she said are at risk of psychological distress and burnout due to stress, long hours, the difficult medical decisions they have to make.

“In the face of these challenges, frontline health workers may feel tremendous personal, organizational or societal pressure to be superheroes – to not appear vulnerable, tired, worn down, or weak,” she wrote.

“All of these pressures may prevent them from seeking the care, treatment and supports they need for their own mental health.”

The United Kingdom, Czechia and Italy lead the world in deaths per 100,000, according to a tracking tool provided by the Coronavirus Resource Center at Johns Hopkins University. Canada falls 16th on the list of the 20 countries that are most affected worldwide,

Quebec and Ontario together account for about 80 per cent of Canada’s COVID-19 fatalities, even as new cases and hospitalizations have been declining.

On Sunday, Quebec Health Minister Christian Dube said there were 200 fewer COVID-19 hospitalizations compared to a week prior, which would allow the province to restart surgeries that had been delayed due to the pandemic.

Nova Scotia and Newfoundland and Labrador reported no new cases each, while harder-hit New Brunswick reported 26.

The new numbers were reported as new limits on travel were coming into effect in the hopes of slowing transmission and limiting the importation of potentially more infectious COVID-19 variants.

Four of Canada’s major airlines suspended service to Mexico and the Caribbean as of Sunday.

Prime Minister Justin Trudeau announced Friday that Air Canada, WestJet, Sunwing and Air Transat had agreed to the measure in a bid to slow the spread of COVID-19.

The restriction will last until April 30, and Trudeau said the airlines will help arrange the return of customers currently on a trip.

It’s one of a suite of new government measures aimed at preventing Canadians from travelling abroad during the doldrums of February and throughout spring break.

As of this Thursday, all international passenger flights must land at one of four airports — Vancouver, Toronto, Calgary or Montreal.

And in the coming weeks, all air travellers arriving in Canada will have to stay at a government-approved hotel for three nights and take a COVID-19 test — all at their own expense.

The travel restrictions come amid a temporary slowdown of vaccine deliveries from Canada’s two approved vaccine manufacturers, Pfizer and Moderna, and fear that the importation of new variants could derail the progress made against the disease in recent weeks.

Ontario has already confirmed 58 cases of a U.K. variant of COVID-19, including a new case on Sunday linked to a Waterloo care home.

Meanwhile, the federal government has begun reviewing a new COVID-19 vaccine that has been submitted for regulatory approval.

Maryland-based Novavax quietly applied on Friday for Health Canada to approve its vaccine, which studies have suggested is effective against the British and South African variants of the virus.

The application comes less than two weeks after Ottawa finalized an agreement with the company for 52 million doses of the vaccine, with an option to purchase another 24 million.

Novavax is the fifth vaccine maker to submit an application for rolling review. AstraZeneca, Pfizer-BioNTech and Moderna all submitted in early October, and Johnson and Johnson at the end November.

Health Canada approved the Pfizer-BioNTech vaccine Dec. 9, and Moderna on Dec. 23, both about three weeks after the companies both completed their phase three trials. A decision on AstraZeneca is expected in the coming weeks.

— with files from Lee Berthiaume and Holly McKenzie-Sutter.