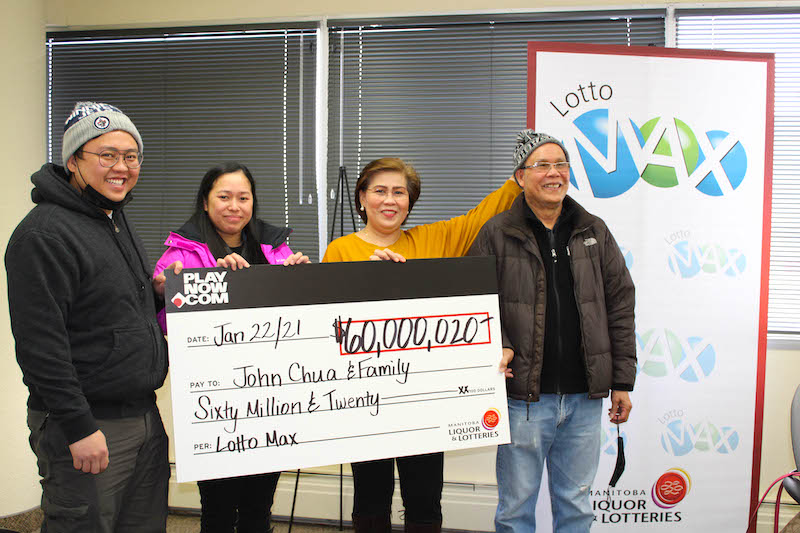 WINNIPEG — The winners of the largest lottery jackpot in Manitoba’s history have claimed their $60,000,020 prize.

John Chua of Winnipeg purchased the lucky Lotto Max ticket on behalf of his family for the January 22 draw.

He says his wife woke him up the next morning to tell him someone in Winnipeg had won the massive prize.

“I was jealous of whoever won… not knowing it was me,” he said in a release.

Due to public health restrictions on retailers at the time, Chua bought his ticket on PlayNow.com and checked his numbers. He initially didn’t see a win, but later received an email and checked online again.

“I thought it might be a free play or something. But it said $60 million — I was confused, so I checked on PlayNow.com when I got home,” he said. “And there it was; I didn’t see it earlier in the morning.”

“He always plays jokes – he’s a joker, so I didn’t believe it,” Angie recalled her son telling her their family was about to be multi-millionaires.

“I believe now that it’s real. Now we’re not just dreaming any more.”

John says despite the windfall, he intends to keep playing the lottery, saying it’s a lot of fun.

The group doesn’t have any immediate plans for the money, but John says he plans to buy a home for his growing family.

“We’ve got kids and need to think for our future. I just want to take the time and do the smart thing.”