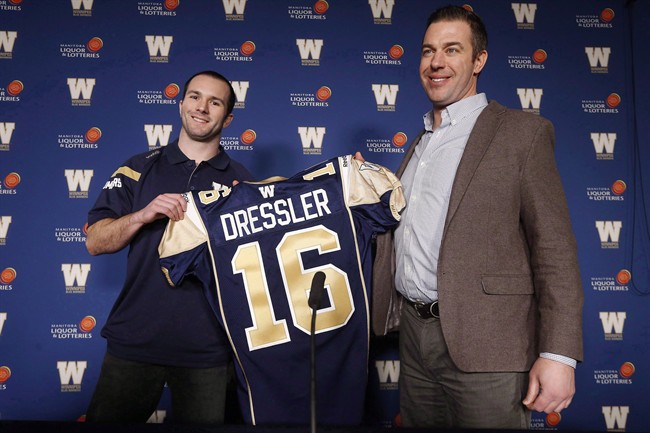 Kyle Walters doesn’t expect to be a major player in CFL free agency.

The Winnipeg Blue Bombers GM’s focus this off-season has been re-signing key members of the franchise’s 2019 Grey Cup-winning team.

After getting key pieces like running back Andrew Harris, offensive linemen Stanley Bryant, Jermarcus Hardrick and Canadian Geoff Gray and defensive lineman Jackson Jeffcoat under contract before they hit free agency, Walters doesn’t have room left in his budget to make a huge splash when free agency opens at noon ET on Tuesday.

“No, it’s going to be pretty quiet for sure for us,” Walters said Monday during a conference call. “This off-season we’ve really focused on trying to bring the main core back . . . once we were able to do that, there’s just not a lot of money left to be spending.

“We might kick the tires on a few guys but there’ll be no big splash, I can’t imagine.”

The CFL is planning for a 2021 season after not playing last year due to the COVID-19 pandemic. While this year’s salary cap is slated to be $5.35 million, the belief is many teams are spending closer to the $4.75-million floor.

That’s resulted in many players having to settle for less in 2021 although some teams — specifically Toronto — have shown a willingness to spend. This off-season, the Argonauts have signed receivers Martavis Bryant (former NFL player) and Eric Rogers, defensive lineman Cordarro Law (the last two acquired from Calgary), Canadian offensive lineman Cody Speller (acquired from Winnipeg) and quarterback Nick Arbuckle (released by Ottawa), to name a few.

Toronto’s off-season movement isn’t a surprise given its 4-14 record in 2019.

“I think you’ll see some of the teams that didn’t have the records they want be a little bit more active,” said Walters. “If you’re a team that needs to flip your roster to make changes and get competitive, you can do that in the CFL pretty quickly from year to year.”

Many of the top potential free agents — especially those on offence ——are staying put. But among those expected to hit the open market are linebackers Henoc Muamba and Cameron Judge (the CFL’s top Canadian and award finalist in 2019) along with Americans Larry Dean and Solomon Elimimian, Canadian offensive lineman Matt O’Donnell, defensive back Derico Murray, defensive lineman Micah Johnson and veteran quarterback McLeod Bethel-Thompson, all Americans.

Winnipeg will also have some free agents, The most notable is American Justin Medlock, a 37-year-old who capably handles all three kicking jobs, but also included are Canadians Chad Rempel (long-snapper) and Thomas Miles (linebacker) along with American receiver Lucky Whitehead.

Walters is giving Medlock the necessary time to ponder his football future.

“It’s been a nice luxury for us to have arguably the best kicker in the history of the CFL and just put his name in there and not have to worry about it,” Walters said. “We talk every year what’s the plan if Justin decides to retire . . . we drafted (Western kicker Marc Leigghio in 2020) to come in and be groomed by Justin.

“Now, we didn’t get a chance but he’ll be given an opportunity. There are still good American kickers down there who can do them all (punt, field goals, kick off) and the global draft is filled with Australian kickers who are solid players as well.”

And with players from both the 2020 and ’21 Canadian draft along with those from the 2021 Global draft (April 15), Walters said teams will have opportunities to fill holes and create more competition once training camps open.

Camps are scheduled to open in May with the regular season kicking off June 10. However, the global pandemic has created no shortage of uncertainty for league executives, coaches and players alike.

“The message has been, ‘Hey, let’s just keep moving full speed ahead as if it was a normal off-season’ . . . we’ll handle any sort of curveballs that come our way but until we get some confirmation on anything let’s just proceed as normal.”