Jeff Stoughton: Always Something to Celebrate 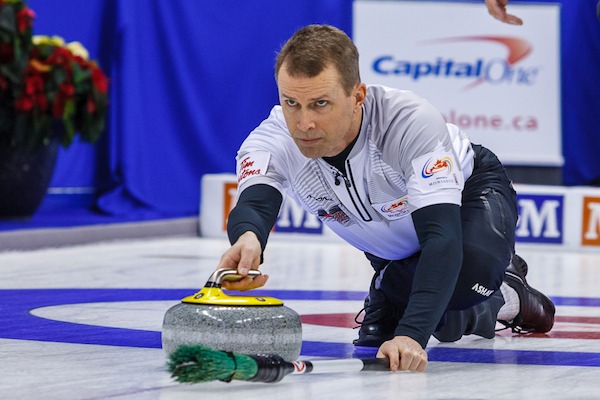 He’s a two-time World Champ, add three Briers wins, toss in a couple of National Mixed titles and the chart-topper is the number of times he skipped teams to the Manitoba Men’s Championship. Yes, Jeff Stoughton won almost everything that was out there over 30 plus years of his competitive curling career. So many that he could celebrate an anniversary of one of them every year if he wanted to.

On this day Stoughton’s trip down memory lane would take him back to the first of his 11 Purple Hearts victories. It took place in Brandon on February 10, 1991 so today is the Diamond Anniversary.

This past weekend the now 57-year-old Stoughton and I chatted by phone from his home in Winnipeg, and to be honest, Jeff had few recollections of his first Provincial Men’s Championship win with Garry Van Den Berghe, Ken Tresoor and Dave Iverson won 30 years ago. But I managed to nudge his memory because I was there too as host of CKND-TV’s coverage.

“We went in there as a brand new team,” Stoughton remembered. “We were the 8th seed I think.”

Around this time in February we’d be watching the Manitoba Men’s Curling Championship. Due to COVID that’s not possible. 30 yrs ago @jeffstoughton won the first of his 11 Purple Hearts. See the highlights then read more about Stoughton’s curling career at https://t.co/lgKQFpQKLV pic.twitter.com/PzqlkfQxqI

That curling season actually marked a return to the competitive scene for Stoughton who had made his Manitoba Tankard debut in 1986. However, three years later he would step back and played mostly at the club level.

Stoughton’s Wildewood foursome dominated the traditional 32 team field that had assembled at the Keystone Centre winning all 7 of their matches. “I remember how exciting it was to play in such a big venue,” Stoughton recalled as memorable moments were coming to mind. “We played Brian Fowler (1987 Manitoba Champion from Brandon) on Friday night and the place was jammed. It was such a cool atmosphere.”

But when it came to Sunday afternoon’s ‘B’-Side Final I had to remind Stoughton that it was the Scott Hamilton team from La Salle whom they faced to earn a first trip to the Brier. “Pre free guard zone. Who wants to remember any of those games, so boring.”

It wasn’t a classic as a steal of two in the fifth end proved to be the difference for the Stoughton team in their 4-2 triumph. “Pretty dull game,” he jokingly added. “Probably why I don’t remember it.”

Stoughton’s championship journey actually began at the Ft. Rouge club watching his mom Nell and dad Jack curl and on occasion, when joined by his sister, they formed a mixed team. One of the many highlights of his life came in 1998 when his mother was inducted as a Builder into the Manitoba Curling Hall of Fame and he was inducted as a Player.

It wasn’t until he was 15 that Stoughton began playing at the junior level. Ten years later he won the first of his two National Mixed Championships.

His second Mixed title came in March of ’91, a couple of weeks following what was a disappointing experience in his Brier debut. Manitoba finished 6 and 5 and a win short of qualifying for a third-place tiebreaker as a result of a 3-2 loss to Alberta’s Kevin Martin in their last round-robin game. “Once you get that experience of a Brier you want to go back. Three of four of us went back in 1996 and our second [Brier] is one that definitely stands out.”

Tresoor and Van Den Berghe were still part of the Stoughton team in ‘96 that was now joined by newcomer Steve Gould and at the Brier, they finished the round-robin with a 9-2 record. Second only to 10-1 Alberta’s Martin.

Other than the standings Stoughton came out on top over Martin. He beat him 7-6 in round-robin play and 6-5 in the 1 v 2 Page Playoff. Prior to the Brier Final Martin laughingly promised to buy Stoughton, who doesn’t consume alcohol, a drink if he was beaten a third time. Stoughton did. Stealing an extra-end 8-7 victory thanks to a great draw to the button with his first rock of the end and a perfect guard with his last. Martin wrecked on a guard with his first shot and his draw to the button came up short. “You were always measured by whether you went to the Brier and how well you did at the Brier,” said Stoughton.

The Stoughton team followed up their Brier performance by romping to the top of the World losing only their last round-robin game after piling up eight straight wins. They swept past Norway’s Eigil Ramsfjell 7-1 in the semi-finals and defeated Scotland’s Warwick Smith 6-2 to win the World Championship.

From his first Provincial Men’s to his last in 2015 Stoughton’s teams reached 12 Championship Finals and won all but one. In 2004 Brent Scales’ Swan River team shocked the, by then, four-time Manitoba champ. Scales’ last rock draw for two in the tenth end barely grabbed a piece of the black painted 12-foot ring in a heart-pounding 7-6 win. “That would have been sweet to go 12 for 12 but oh well.”

That loss might have been the catalyst for Stoughton for in the next 10 years he solidified his place as Manitoba’s greatest skip capturing seven more Purple Hearts. ”Our focus was to try and win the Manitoba Championship. It’s what my teams were always about. The rest of the year didn’t matter. For me, the most nervous I ever got was making sure I could get to a Sunday during the Men’s Provincial play-downs. I wanted to be playing on Sunday because now it’s on, now it’s exciting, now I’m nervous! I’ve got the butterflies going and if I ever played games that were big and I didn’t have butterflies I knew something was wrong.”

Stoughton was last on the world stage 10 years ago in 2011 with Jon Mead returning to the team, along with Gould and newcomer Reid Carruthers. At a dinner with a couple of their sponsors, Stoughton was asked about the teams’ goals for the season and without hesitation and in a matter of fact tone confidently stated, as only Stoughton could, “We’re going to win the world championship.” As Stoughton recalls, that almost caused a shocked Carruthers to nearly fall off his chair. “It just felt like it was going to happen.”

It did happen exactly as he predicted. Stoughton won Manitoba for a ninth time, added his third Brier win and at the World’s put on another dominating display. The Stoughton team outscored their opponents by 35 points, almost sweeping the field with a 10-1 round-robin record.

In the playoffs, Stoughton’s crew bested Scotland’s Tom Brewster twice — 5-2 in the semi-final and in the Championship they were down two after four ends. But rebounded scoring three in the fifth and adding two more in the eighth in their 6-5 victory.

Stoughton’s last two Manitoba Championships were back to back in 2013 and 2014. By now he was 50 and still more than capable of competing at the highest level. However, he knew that 2015 would be his last and he exited following a semi-final loss to Mike McEwen. “I wasn’t disappointed [retiring] just pretty proud of all the accomplishments that myself and my teammates had done over the years.”

Of course, there were disappointments along the journey and some of Stoughton’s heartbreaking losses were the World’s in ’99 and the 2005 Olympic Trials. “It doesn’t keep me awake at night anymore, that’s for darn sure. Other than that no regrets.”

One promise that might keep the 57-year-old Stoughton awake at night is fear he’ll have to come out of retirement. “I still have a deal with Steve Gould that when he turns 50 I’m supposed to play lead for him in the Seniors. But I’m trying to make sure he has forgotten all about the deal that we made. So we’ll see if he remembers.”

A proud Manitoban. It’ll be a while before Stoughton’s 11 Provincial Men’s titles will be matched or surpassed but he hopes someone will. “I would be happy for any skip who is able to achieve that. Clearly, if you’re coming out of Manitoba that many times you’re bound to win a couple of Briers.”

Though he’s retired from competitive curling Stoughton is still very close to the game working with Curling Canada as the National Team Program Manager for the Men’s and Mixed Doubles teams. Canada claimed the first Olympic gold in mixed curling with Kaitlyn Lawes and John Morris teaming up in 2018.

Today, because the COVID-19 pandemic has reduced the number of Canadian curling events, Stoughton will have the time to look back 30 years. Most of his significant victories have been posted to YouTube but there is only one spot he’ll find that first Purple Heart win. “Now that I know maybe I’ll dig into my parents’ old VHS stash and stick in the 1991 Tankard Final. If I can find a VCR that works. It would be good for a chuckle.”