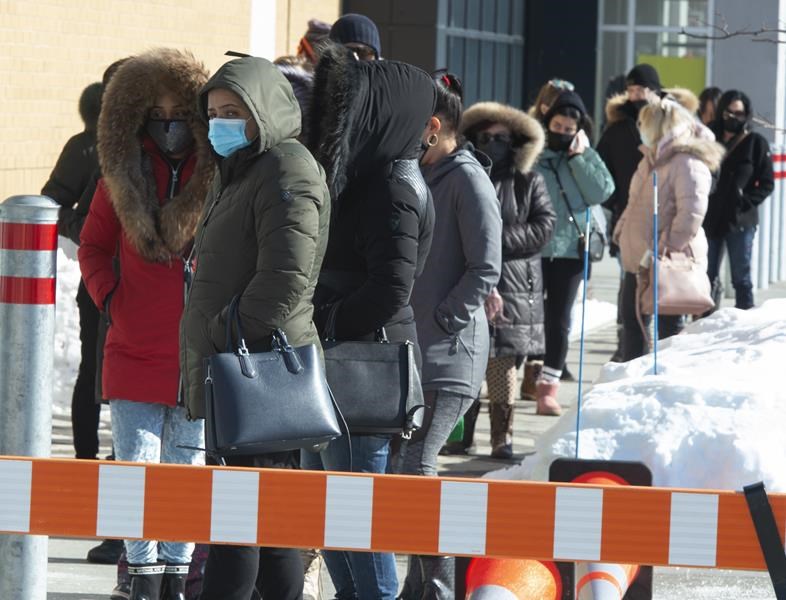 Customers line up at a store as a slight easing of COVID-19 restrictions allow non-essential stores to reopen, Monday, Feb. 8, 2021 in Montreal. (THE CANADIAN PRESS/Ryan Remiorz)

TORONTO — The soaring rate of new COVID-19 infections has moderated substantially across the country in recent weeks because of anti-pandemic restrictions, health authorities said, as they warned against complacency.

Lockdowns and other measures appear to have had a significant effect in curbing the spread of the novel coronavirus, and they need to stay in place, the Public Health Agency of Canada said in its latest summary.

“We are observing a steady decline in COVID-19 activity,” the agency said. “With still-elevated daily case counts, the risk remains that trends could reverse quickly.”

To date, Canada has seen more than 810,000 cases, with deaths approaching 21,000. The agency also noted the emergence of new variants of concern, with eight provinces having found new strains.

Despite the slower rise in case numbers, the financial costs of the pandemic remain steep.

Ontario, which has seen an almost 70 per cent plunge in new daily cases in the past month, also said it’s one-time pandemic spending had reached $13.3 billion.

The money, from Ottawa, is going to support small business, hospitals and nursing homes, the province said in its third-quarter fiscal update, which also projected a $38.5-billion deficit this year.

“These deficits are not sustainable,” Finance Minister Peter Bethlenfalvy said.

The province also said it had now set aside $3.9 billion for further pandemic-related spending.

The severity of the pandemic was brought into sharp relief by a new study reported on Wednesday that COVID-19 is 3.5 times more deadly than influenza. The study, which looked at hospitalizations for the flu between November 2019 and June 2020 in seven large Canadian hospitals, also found COVID patients needed more intensive care treatment and stayed in hospital longer than those with influenza.

“We can now say definitively that COVID-19 is much more severe than seasonal influenza,” said Dr. Amol Verma, of St. Michael’s Hospital and the University of Toronto.

With so many hopes riding on vaccinating our way out of the pandemic, India’s Prime Minister Narendra Modi said he told Prime Minister Justin Trudeau that India would try to help Canada get doses.

“Assured him that India would do its best to facilitate supplies of COVID vaccines sought by Canada,” Modi tweeted.

Trudeau has only said the two countries were working together against COVID-19.

The pandemic has caused more angst in Newfoundland and Labrador, where an outbreak in the St. John’s region erupted in the middle of an election campaign. In the past two days, health officials reported 41 new cases of COVID-19 in the eastern health region, which includes the capital.

The provincial opposition has attacked incumbent Liberal Premier Andrew Furey for calling the vote amidst the pandemic. In response, Furey said on Wednesday that other, harder-hit provinces had voted safely during the health crisis.

“We’ve seen it in other jurisdictions with a higher burden of the disease,” Furey said.

The Newfoundland and Labrador English School District said it was suspending in-class instruction for all kindergarten to Grade 12 schools in the St. John’s metro area until Feb. 26.

The slower growth of infections prompted Ontario to end a state of emergency and lift restrictions in three regions on Wednesday. The change ended stay-at-home orders and allowed restaurants and non-essential businesses to open their doors.

Remaining Ontario regions — with the exception of the Greater Toronto Area — were similarly set to ease lockdown measures next week. Toronto, Peel Region and York Region could follow suit on Feb. 22 depending on their situations at the time.

“Canadians are urged to remain vigilant and to continue following local public health advice as well as consistently maintaining individual practices that keep us and our families safer,” Canada’s public health agency said.