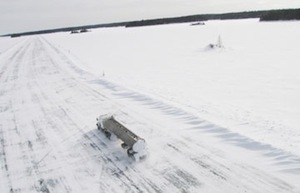 WINNIPEG — Manitoba’s winter road system will be fully open this week to connect remote and northern communities, the province says.

The road system usually opens in mid-January, depending on weather conditions, but was delayed by one month this year.

“Due to warmer temperatures in December and January, construction fell behind the seasonal schedule,” said Infrastructure Minister Ron Schuler.

“However, we will not compromise the safety of the road system or of the people constructing it. After many efforts, we are pleased to announce the system will be completed this week and communities will have full passage to the network.”

The province says the Tadoule Lake road is the only portion of the roadway that won’t be ready for travellers this week.