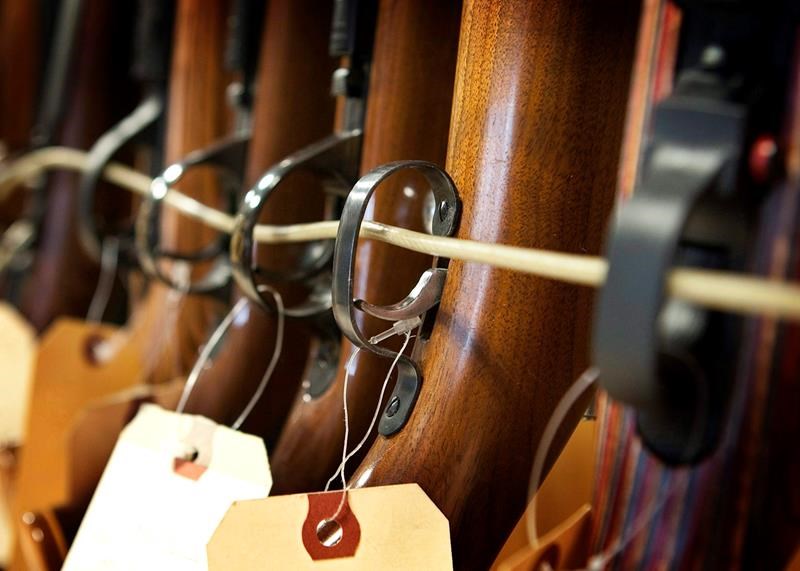 Rifles are shown locked up in Calgary, Wednesday, Sept. 15, 2010. (THE CANADIAN PRESS/Jeff McIntosh)

The Liberal government said Tuesday the measures would be backed up with serious penalties to enforce these bylaws, including jail time for people who violate municipal rules.

Under the plan, firearms licence holders would have to comply with handgun storage and transport restrictions in municipalities that pass bylaws.

Such bylaws could forbid keeping handguns at home, meaning they would have to be stored at a licensed business, or they might go further by outlawing handguns anywhere in a municipality.

Many gun-control advocates have called for a national handgun ban, warning that leaving it up to municipalities would create an ineffective patchwork of regulations.

Toronto Mayor John Tory noted the council in Canada’s largest city has expressed support for a national ban, adding the city looks forward to receiving details from the federal government on how the proposal outlined Tuesday “would work and what its impact would be on gun violence.”

Vancouver Mayor Kennedy Stewart, citing a recent uptick in gang-related shootings, promptly announced plans to ask city council to use the new powers, should they become law, to implement a handgun ban.

As expected, the bill also proposes a buyback of a wide array of recently banned firearms the government considers assault-style weapons.

Owners could turn in their guns for compensation but would also be able to keep them under strict conditions, including registration and secure storage of the firearms in question.

Under the rules, these guns could not be legally used, transported, sold, transferred or bequeathed by individuals in Canada.

They would become “virtually useless as a firearm,” Public Safety Minister Bill Blair said at a news conference, calling the federal plan “overwhelmingly the most effective way” to remove the outlawed guns from society.

The government has faced pressure to make the buyback mandatory — like programs in Australia and New Zealand — to ensure as many banned guns as possible are turned in.

“This is a huge win for the gun lobby,” said Heidi Rathjen, a witness to the Ecole Polytechnique shooting massacre in 1989 who is coordinator of the group PolySeSouvient.

She called it an “easily reversible half-measure” that buys the gun lobby time to work toward electing the Conservatives, who oppose the ban.

Suzanne Laplante-Edward, whose daughter Anne-Marie was killed at Polytechnique, said the optional buyback is a total betrayal.

“My family and I have fought for three decades to ban these weapons,” she said.

“We thought we had won in the fall of 2019 when the Liberals announced with much pomp and circumstance that they would ban and buy back all of these killing machines. They lied to us. They lied to Canadians.”

Asked if the optional buyback was a calculation intended to ease opposition from the gun lobby, Prime Minister Justin Trudeau said, “Obviously, there are political elements in this. But the core of why we are doing this, the core of why Canadians want this done, is to keep our communities safe.”

Some gun owners strongly oppose the ban of about 1,500 firearm models and variants altogether and seek to overturn it through the courts.

The Canadian Coalition for Firearm Rights dismissed the bill as simple electioneering that uses licensed gun owners as fodder to mobilize the Liberal party’s base.

“Reasonable Canadians should ask themselves if they think that anything in this bill will stop the shootings in downtown Toronto or Vancouver or the violence or property crime we see in rural communities.”

Conservative public safety critic Shannon Stubbs accused the government of taking firearms away from law-abiding citizens, saying the legislation “does nothing to stop dangerous criminals and gangs who obtain their guns illegally.”

The bill would also:

— Introduce new “red flag” and “yellow flag” laws that would allow people, such as concerned friends or relatives, to apply to the courts for the immediate removal of a person’s firearms, or to ask a chief firearms officer to suspend and review an individual’s licence to own guns;

— Target gun smuggling and trafficking by increasing criminal penalties, and by boosting the capacity of the RCMP and the Canada Border Services Agency to combat the illegal importation of firearms;

— Create new offences for altering the cartridge magazine component of a gun and depicting violence in firearms advertising;

— Introduce tighter restrictions on imports of ammunition, and ensure the prohibition of imports, exports, sales and transfers of all replica firearms.

Canadian Doctors for Protection from Guns welcomed the legislation, saying while it “leaves much work to be done,” the various elements make it worthy of support.

“This is a comprehensive bill that, if enacted, will save lives,” said Dr. Najma Ahmed, the group’s co-chair and a trauma surgeon at St. Michael’s Hospital in Toronto.