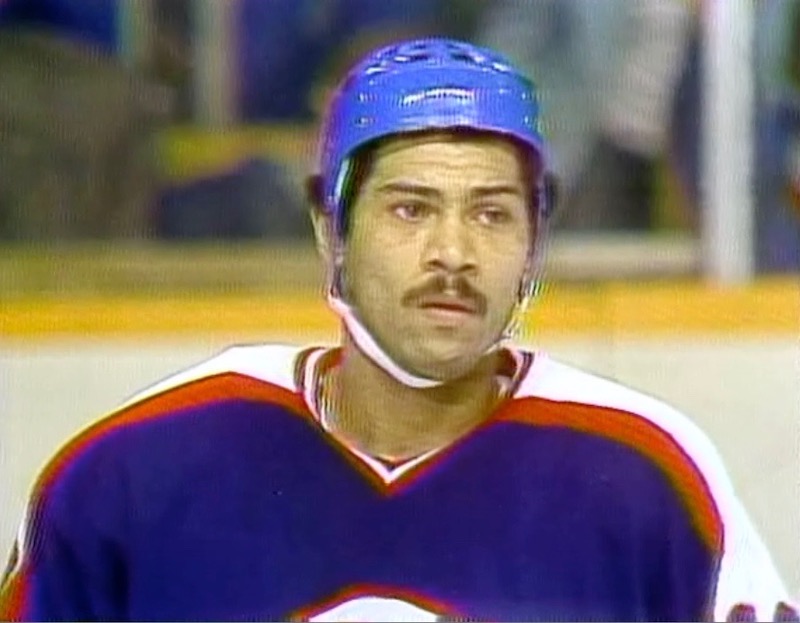 Bill Riley was the first black professional hockey player to suit up for the Winnipeg Jets in the 1979-80 season.

Growing up in Nova Scotia Bill Riley remembers playing road hockey on the streets of Amherst pretending to be Willie O’Ree.

Riley would follow O’Ree’s career path becoming the third black player in the National Hockey League after O’Ree and Mike Marson, who would be Riley’s teammate and line-mate with the Washington Capitals.

Riley had only seen NHL games on TV and had just turned 24-years-old when he saw his first live game on December 26, 1974. It also just happened to be Riley’s NHL debut as the expansion Capitals were at home to the Stanley Cup Champion Philadelphia Flyers. “I wasn’t ready to play and at that time I was in awe of everything,” Riley told me during our nearly hour-long phone interview from his home in Amherst. “I was shaking so bad during the national anthem I almost pissed myself.”

Riley had always been a prolific scorer while playing minor hockey and could defend himself if needed too. Never drafted, Riley caught the attention of the Capitals while playing in the BC senior league with Kitimat. In the 1973-74 season, Riley scored 76 goals and had 118 points which earned him an invite to the Caps training camp in London, Ontario. After camp, the Caps assigned Riley to their International Hockey League farm team in Ohio and it was with the Dayton Gems that Riley first met one of his biggest supporters, head coach Tom McVie. “I tear up when I think about him because everything I have in life I owe to Tommy McVie because he believed in me. He gave me a shot.”

In 63 games that first season with the Gems, Riley piled up 279 penalty minutes to go with his 12 goals and 16 assists. The racism Riley would experience in the minors was more off the ice than on as opposing fans were ruthless with their racial taunts. “You could make a movie out of the stuff that happened to me,” Riley said. “Thank God I had some great teammates and they were all white and they went to war for me. They took care of me. If I had to drop my gloves because of a racist comment I’d have two or three teammates pushing me out of the way so they could deal with it. That stuff I’ll never forget.”

Riley will also never forget how he was signed to his first NHL contract. He’d been called up by the Capitals in late December of the 1976-77 season on an amateur tryout. After 10 games Riley was called into the office while the team had departed to Buffalo to play the Sabres the next night.

Bill Riley was the third black player in the NHL and the first player in Washington Capitals history to have a positive plus/minus. He should have had a longer NHL career which ended as a Jet despite 5 points in 14 games. https://t.co/NH6LDBjMLK pic.twitter.com/FYg0LtP7jf

Riley was presented with two plane tickets and two offers. He could either head back to Dayton to play for $11,000 or sign for $35,000 and join the team in Buffalo. “I had no choice, I had to take what they offered me.” Adding to Riley’s unhappiness was he only received a $1,500 signing bonus.

He met the team in Buffalo, arriving only hours before puck drop. So late that he missed the pre-game meal. No matter as he assisted on three goals in the 4-2 win. The first-ever victory by the Capitals over the Sabres.

As the season went along Riley ended up on a line with Marson playing between centre Gerry Meehan. “They called us the “Oreo Cookie Line,” Riley said laughingly.

It was a history-making season for the Capitals and for Riley. For the first time in three seasons, the Capitals didn’t finish dead last in the overall standings. They improved by 13 wins and 30 points from the previous season and Riley was chosen as the teams’ top rookie for his 13 goals and 14 assists. He was also a plus-4. The first Capital player ever with a positive plus/minus. Riley recalls Meehan telling him that he was the first black player to play meaningful minutes in the National Hockey League. Riley’s head coach in his rookie NHL season was McVie.

After another 13-goal 1977-78 season, Riley and the Capitals had a fallout. During training camp, he and Marson were returning back from lunch when they were told by reporters they were being sent to the minors. A decision Riley didn’t agree with. “They were paying guys a hundred thousand dollars to sit on the bench getting tapped on the shoulder twice a game to fight. Both of us could fight and play and both of us got garbage contracts.”

With the Winnipeg Jets entering the NHL for the 1979-80 season it was coach Tom McVie who lobbied general manager John Ferguson to grab Riley in the Expansion Draft telling reporters at the time: “Bill Riley has got the heart about the size of your head and I know, believe me. He is going to come to camp and he’s going to rip that arena apart trying to make the team.”

Riley did make an impression at camp scoring four goals in the first week of scrimmages. He called it the best training camp of his 10 years of professional hockey. However when camp was done, Riley was sent down to the Voyageurs of the American Hockey League. A move Riley expected. “The deal was already made with the Montreal Canadiens because I was a Nova Scotia boy. They thought I could boost attendance in Halifax so it didn’t matter how well I played.”

Riley would captain the Voyageurs and was one of the top scorers in the AHL with 13 goals when he was called back to the Jets in early December. Riley didn’t waste any time in his Jets debut as he fought Charles Marsh of the Atlanta Flames. But it was who Riley didn’t fight that may have earned the ire of the GM. “He asked me to go beat up Kent Nilsson,” claims an irate Riley. “I’ll go fight anybody, I fought Tiger (Dave Williams), I fought Schultz (Dave ‘The Hammer’). I fought all the heavyweights but I’m not going to beat up a guy who can’t fight.”

John Ferguson passed away in 2007 so it’s not possible to know if Riley’s account is entirely accurate. But it was a surprise when Nilsson wasn’t protected by Ferguson when the Jets’ entered the NHL. Now Nilsson’s WHA contract may have included an out clause that even if the Jets had retained him Nilsson would still have left for Atlanta. Riley wasn’t backing down. “What would I have looked like if I jumped him (Nilsson) and started pounding him. I grew up in a tough neighbourhood and I was the guy who took care of bullies.”

Riley was playing on a line with Lyle Moffat and Jude Drouin and in 14 games had produced 3 goals and 2 assists. Catching the attention of the Jets best player Morris Lukowich. “Worked extremely hard in practice, hit hard, skated hard, pretty good shot. He punched like a sledgehammer. Thought he was a pretty good hockey player.”

Riley felt he was playing so well he stopped worrying whenever the phone rang. But a month after he joined the Jets Riley did get the call no NHL player wants to pick up. “When I got sent down it was like somebody hit me in the head with a shovel,” Riley said. “When I got called into the office that day I went into the bathroom and cried my eyes out because I knew this would have been my last kick at the cat and Tommy’s eyes were full of water when he was telling me. I felt I should have been there a whole lot longer.”

Lukowich added, “When Bill got sent down I remember thinking why did we do that?”

Riley doesn’t believe that there was any racist intent on Ferguson’s part about sending him back to the AHL. It was business. “They had Jimmy Mann, who Fergie drafted in his own image, a big tough right-winger who he figured could play a lot better than he did. Somebody had to go and I was the odd man out.”

Riley would finish out his career in the minors captaining the New Brunswick Hawks to the Calder Cup Championship in 1982 and torching the Newfoundland Senior League from 1986 to 1989 with 93 goals, 225 points in 110 games all with the St. John’s Caps before calling it a career.

Nowadays the 70-year-old Riley, who describes himself as a procrastinator, contemplates writing a tell-all book. “I’m not holding nothing back. I kept all that stuff in over the years because I didn’t want them to think we don’t want a lot of black players because they’re nothing but trouble.”