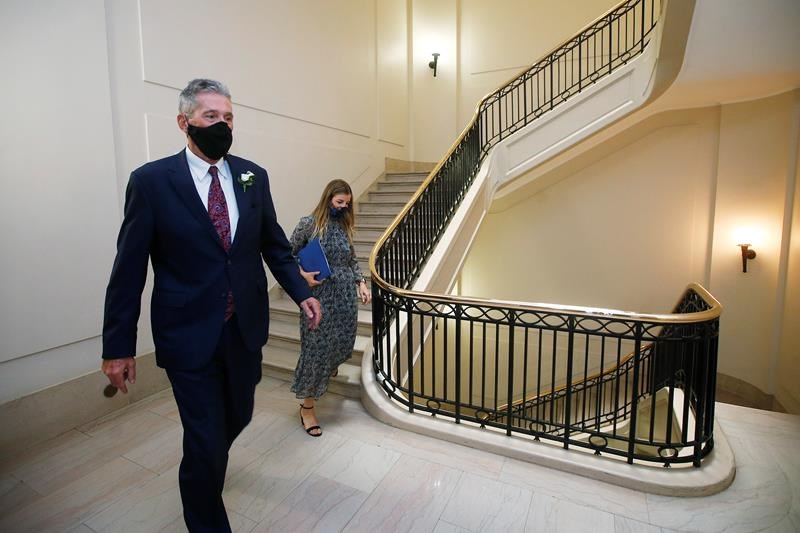 Manitoba Premier Brian Pallister makes his way to a press conference prior to the reading of the Speech from the Throne at the Manitoba Legislature in Winnipeg, Wednesday, October 7, 2020. (THE CANADIAN PRESS/John Woods)

WINNIPEG — Premier Brian Pallister says the handling of Manitoba Hydro under the former NDP government is “the scandal of the century.”

A review of the Crown corporation released last week found a lack of government oversight led to cost overruns and a large increase in debt.

The review by former Saskatchewan premier Brad Wall delved into construction of the Bipole Three transmission line and the Keeyask generating station.

The projects together were $3.7 billion over the initial budget.

Opposition NDP Leader Wab Kinew has expressed concerns that the report is a step toward privatization and deregulation.

Pallister says his Progressive Conservative government has no intention of moving in that direction.

He says the government wants to guarantee Manitobans have a say on major decisions.

“We are going to take steps to strengthen referendum requirements to ensure Manitobans have their fair say,” Pallister said.

Pallister did not provide more details on what any changes may look like.

The two projects were built over the last 15 years. In that time, Manitoba Hydro’s debt tripled to more than $23 billion.

It said the former government didn’t engage with the Manitoba Hydro board even as expenses grew.

Costs were further increased in 2007 after the government ordered the Crown to divert the transmission line through western Manitoba, saying it was necessary to protect pristine boreal forest.

Wall’s report said if the line had been built straight down the east side of the province as originally proposed, Hydro could have avoided up to $1 billion in additional costs.

Pallister’s government hired Wall to do the review. The premier thanked Wall on Monday for his report into what Pallister called a $10-billion scandal, “as far as I’m concerned the scandal of the century.”

“This is the largest and most significant mismanagement of taxpayers’ funds we have ever seen,” Pallister said.

“We are committed to ensuring that this will never happen again.”