‘Children Need Us to Get It Right:’ Report Says Manitoba Child Deaths Preventable 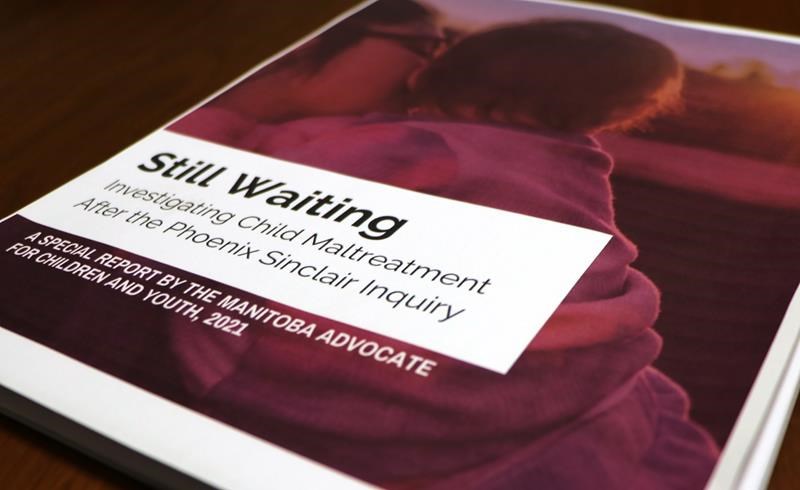 A printed copy of the cover to a new report by the Manitoba Advocate for Children and Youth is shown in Winnipeg, on Wednesday, March 10, 2021. (THE CANADIAN PRESS/Kelly Geraldine Malone)

WINNIPEG — A report by Manitoba’s children’s advocate into the deaths of 19 young children found holes in oversight and lack of support from child welfare.

“All of the children were at risk for maltreatment and their families did not receive the child welfare services to which they were entitled,” Ainsley Krone, acting advocate for children and youth, said in the report released Thursday.

“Each one of these deaths was preventable.”

The report said the 19 children died from maltreatment between 2008 and 2020. Twelve were under the age of two and the others were under five.

The advocate’s office tracked the deaths, which occurred after Phoenix Sinclair died. The five-year-old Indigenous girl had stints in foster care before she was abused and killed by her mother and stepfather in 2005.

She would have been 21 this year.

The girl’s death sent shock waves through the province and led to a $14-million public inquiry. Its final report, which included 62 recommendations, was provided to the government in 2013.

Just over half the recommendations were completed as of last month, the advocate’s report said. At that rate, Krone said, it will be 2028 before all are addressed.

“Children are still dying of maltreatment similar to what Phoenix experienced,” Krone said.

In a six-month period — from October 2019 to March 2020 — Manitoba’s Child Protection Centre received 505 new requests for service, the report said.

Krone made five recommendations, including a call for the government to finish implementing the Phoenix inquiry actions.

Krone further called for agencies across the province to conduct case reviews for all children in care under the age of five if they are expected to return to their parents. She said a lack of proper planning and post-reunification monitoring causes a significant risk to children.

Families Minister Rochelle Squires said she is committed to fulfilling all of Krone’s recommendations and will have a progress report in six months. She said she has also instructed her department to implement “the intent and the spirit” of all the Phoenix inquiry recommendations.

“The death of any child is tragic,” Squires said.

Krone’s report took an approach that positions a child in their environment and recognizes the impacts of systemic oppression. The advocate said it was important to understand the negative effects of racism, poverty, sexism and colonization when looking at what contributed to the deaths.

There are almost 10,000 children in care in Manitoba and 90 per cent are Indigenous. Forty-two per cent of the children who died were First Nations and two were Metis.

The report found 74 per cent of families were receiving support from child-welfare agencies when the deaths occurred. Fourteen of the children were living in their family homes when they were injured. Three were in foster homes.

The report detailed the deaths of 21-month-old Kierra Williams, who died in 2014, and two-year-old Jaylene Sanderson-Redhead, who died in 2009. The mothers of both girls were convicted in the deaths.

It also included other accounts of children whose names were withheld.

One of them, called Sky in the report, was apprehended as a newborn. The baby was returned to the mother but there weren’t supports in place, the report said. A few weeks later, the child- welfare agency was notified that the mother was struggling, but there was little contact with the family.

Sky died after being home for less than a year. The child was dehydrated, underweight and showed signs of bone fractures at the time of death.

The report said another child, called Terry, was not supported after being returned to family, even though the agency was aware the mother was struggling. Six months after returning home, Terry suffered multiple injuries and died.

Krone often hears from families about a lack of adequate supports when children return home. She said it’s a lost opportunity for child-welfare agencies to engage with families and means signs of abuse or maltreatment are being missed.

While there have been significant changes to child welfare in Manitoba since the Phoenix inquiry, Krone said it is not enough. She said the province must become a leader in supporting families and keeping children safe.

“Children need us to get it right.”