By Cassandra Szklarski, The Canadian Press 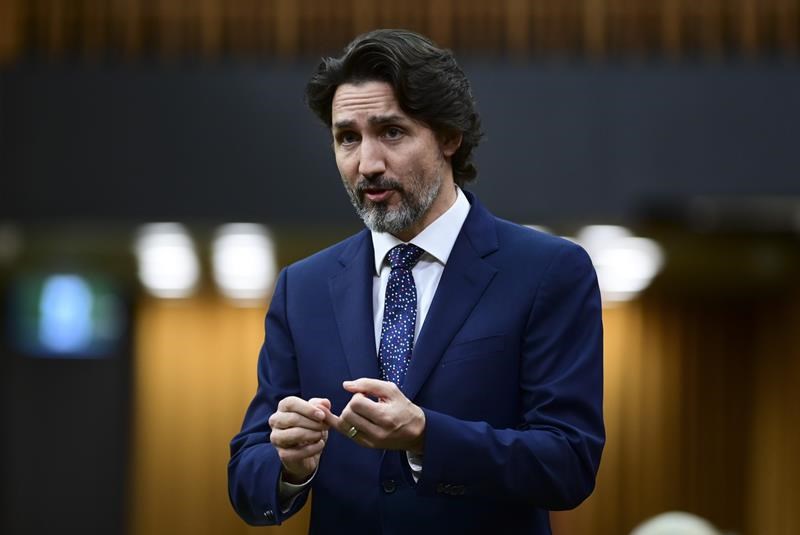 Prime Minister Justin Trudeau expressed caution Friday over the use of “vaccine passports,” suggesting they could unfairly impact some people if used to decide who can go to a concert or dine at a restaurant.

While Trudeau acknowledged that proof of a COVID-19 inoculation would not be out of place for travellers who already face similar requirements for other vaccines when embarking on international jaunts, he said such a scheme for everyday activities in Canada raises “questions of equity.”

He said some Canadians cannot be vaccinated because of medical conditions, and noted people who are not prioritized for shots will have to wait much longer than others.

“These are things that we have to take into account so that yes, we’re looking to try and encourage everyone to get vaccinated as quickly as possible, but we’re not discriminating and bringing in unfairness in the process at the same time,” Trudeau said while announcing Pfizer vaccine deliveries will soon reach one million doses per week and extend into early May.

Health Minister Patty Hajdu noted discussions are underway with international partners about how vaccine passports could be used.

She said it’s important to make sure Canada is not left behind if the world makes this a new travel requirement.

But conversations around how passports could be used within Canada are a provincial matter, said Hajdu, noting provinces already oversee similar vaccination proofs required by some schools and certain health-care settings.

“Those are all largely provincial decisions and of course they’re very difficult ones,” she said.

“But certainly I know provinces and territories are deliberating about those kinds of decisions that are coming their way as more people become vaccinated.”

Quebec officials said last month that the province was studying the possibility of a vaccine passport, prompting government critics to urge a rigorous examination of the ethical consequences.

The notion is drawing more attention as countries increasingly look towards a post-COVID world.

Israel offers a “green pass” to vaccinated citizens and those who have recovered from COVID-19 so that they can resume activities otherwise prevented by pandemic precautions.

But that country is well ahead of Canada’s vaccination rollout with more than half the population covered by two doses.

In Canada, more than 2.7 million doses have been administered so far.

Deputy Chief Public Health Officer Dr. Howard Njoo said close to 600,000 doses were given out over the past week, the highest since the rollout began.

Trudeau said Pfizer’s updated delivery schedule was “going to make a big difference” in coming weeks, repeating a pledge to dramatically ramp up supply in the coming months.

He said Canada can expect to receive at least one million COVID-19 Pfizer-BioNTech vaccine doses per week from March 22 to May 10.

The influx is more than double the 444,600 doses expected next week and is on top of vaccine deliveries from Moderna, expected to bring 846,000 doses the week of March 22.

Over the past week there has been an average of more than 3,050 new COVID-19 cases and 31 deaths reported daily.

Chief Public Health Officer Dr. Theresa Tam said more than 2,050 patients were treated in hospital each day, including about 540 in critical care.

She added there were now close to 3,000 variants of concern cases, with the B.1.1.7. variant accounting for more than 90 per cent.

Ontario Health Minister Christine Elliott said the province had reached a critical stage of the pandemic as a spike in cases forced officials to move one southwestern region into lockdown Monday.

The province said the Sarnia-Lambton region would have to abide by tighter restrictions while the Northwestern Health Unit will move into the second-strictest “red” category of a colour-coded pandemic framework.

In Saskatchewan, health officials encouraged older residents in Regina to stay home as variant cases jumped in the capital, days after the province eased a ban on household visits.

However, in Manitoba, the government announced people will be allowed to gather with friends on restaurant patios starting Saturday. The province is also going to allow household members who sit together in religious services to remove their masks, as long as they are distanced from others and are not singing.

Njoo touted the nation’s progress following a week of remembrance in which the world marked the one-year anniversary of the pandemic.

But Njoo also warned that “racing towards the finish” could cost us hard-won successes.

British Columbia recorded its first day without a death due to COVID-19 in months. Health officials eased limits on outdoor gatherings on Thursday, and on Friday urged residents to ensure the 10 people outside don’t come indoors.

Research author Peter Loewen found just a slim majority of support in an online survey, and greater hesitancy over how such information would be recorded and verified.

But he acknowledged questions of fairness, as well as hurdles to figuring out how to issue and verify passports.