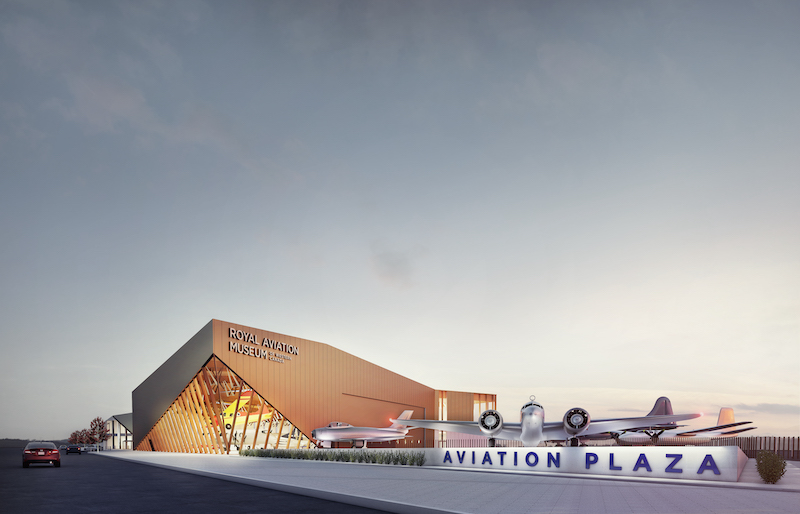 An artist’s rendering of the new Royal Aviation Museum of Western Canada, scheduled to open in early 2022. (HANDOUT)

A screenshot from the redesigned Royal Aviation Museum of Western Canada website. (HANDOUT)

WINNIPEG — The Royal Aviation Museum of Western Canada has landed a refreshed brand look ahead of its new facility opening early next year.

The new logo, brand colours, website and other creative elements for the RAMWC were unveiled on Monday, but the refreshed visual identity is only the beginning.

“We are excited for the day when we can open our doors to Manitobans. We believe that they will be amazed and proud at what they find,” said Terry Slobodian, president and CEO, RAMWC. “In the meantime, a visit to our redesigned website will whet their appetite for what is to come.”

Winnipeg creative agency Relish worked with the RAMWC to develop their new look, drawing inspiration from Canadiana, aircraft innovation, and flight planning for the museum’s logo.

The museum, founded in 1974, is in the process of building a new 86,000 square-foot facility on the James Richardson International Airport campus. Once open, it will continue to house one of the largest aviation heritage collections in Canada with nearly 100 historic aircraft and more than 70,000 artefacts, texts, and photographs.

The museum closed in 2018 to prepare for the move and has been temporarily storing many of its larger artefacts in aircraft hangars and other locations.

Donations to the museum’s capital campaign can be made online.