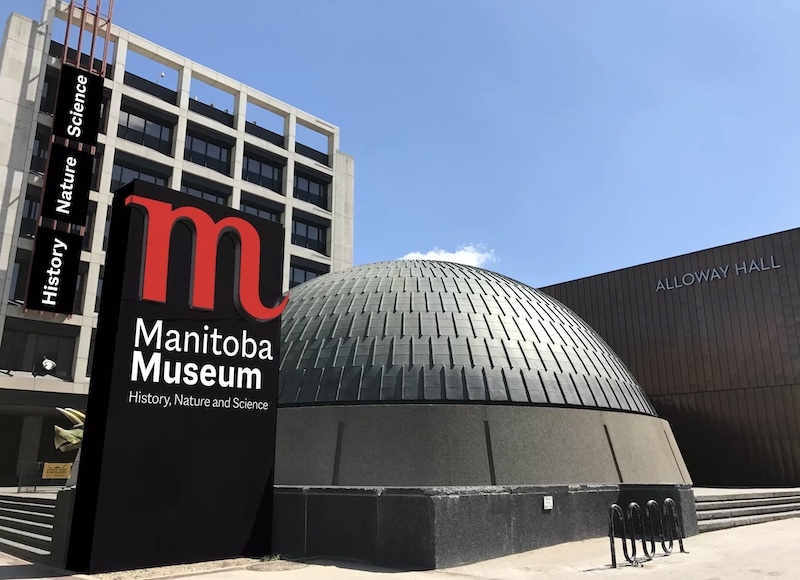 The Manitoba Museum’s new logo is shown on its outdoor signage. (WINSLOW CREATIVE)

The Manitoba Museum has launched a new brand and graphic identity to better align with its recent transformation.

The rebranding comes years after the museum initially began reviewing its brand as the Bringing Our Stories Forward Capital Renewal Project began.

“This rebranding is an outward reflection of the work and the many changes that have been going on within the museum,” said Willow Krauchi, director of marketing, sales and programs.

“We are pleased to launch our new brand identity as our doors have reopened and the public is able to see the transformation of many spaces.”

The capital renewal project saw the transformation of more than 50% of the museum galleries with special attention on updating the stories of Indigenous Peoples and Newcomers to Canada.

Winnipeg design firm Winslow Creative was behind the new visual identity, which features a stylized letter ‘M’ reaching out to reflect the museum’s welcoming approach to making connections and sharing the stories of Manitoba.

The Manitoba Museum is open daily from 11 a.m. to 5 p.m. throughout spring break, which runs until April 4. Regular hours are 11-5 daily, except for Monday-Wednesday when the museum is closed. While the museum galleries are open, the Planetarium, Science Gallery, and Museum Shop remain temporarily closed until further notice.

Our new branding reflects the Museum’s welcoming approach to making connections and sharing the stories of Manitoba. We are pleased to launch our new brand identity as our doors have re-opened and the public is able to see the transformation of many of our spaces. pic.twitter.com/lSoa7APfvj