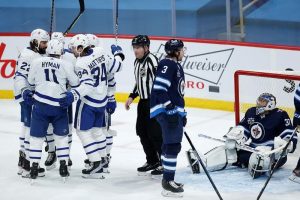 WINNIPEG — The Maple Leafs got the start they wanted. The Winnipeg Jets, back home after a seven-game road trip, didn’t.

Auston Matthews scored his league-leading 24th goal and goaltender Jack Campbell improved his season record to 7-0-0 as Toronto downed Winnipeg 3-1 Wednesday to extend its lead atop the North Division over the Jets to three points.

“I don’t know what the numbers are but I’d imagine if you go up 2-0 in a game you’re going to win most of the time. It’s hard to come back in this league, especially that early,” said Alex Kerfoot, who scored a short-handed goal to make it 3-0 in the second period. “It’s nice to have that cushion.”

Winnipeg had won four of its previous five, including a 5-1 win Monday in Calgary. But it trailed after a sluggish first period that saw Toronto dominate despite going 0-for-3 on the power play.

“I was worried about this one right from the day the schedule came out,” said Jets coach Paul Maurice.

Adding to the Jets woes on the night, captain Blake Wheeler did not see action after the first period. Maurice had not much in the way of an update.

“We’ll get it looked at (Thursday) … He just wasn’t feeling it right so we want to be careful with him,” he said.

“Truly I don’t know. He may be back on the ice full-on next game,” he added. “It’s not COVID-related.”

The Leafs went 0-for-5 on the power play, extending a drought that dates back to March 9.

Toronto coach Sheldon Keefe opted to pass on the power-play deficiencies, choosing instead to see the positives.

“It’s a big road win here for us. There’s a lot of things you could pick out about it that we could do better,” he said. “We’ll certainly get to work on that (Thursday). But just focus on the fact that we had a really good start here to set us up for a chance to win the game and we did exactly that.”

The Leafs were coming off a 3-2 overtime loss to visiting Edmonton on Monday. Toronto had won its previous three outings, including two in overtime, rebounding from a poor stretch that saw it lose six of seven.

With No. 1 goalie Frederik Andersen back in Toronto awaiting further injury evaluation of a lower-body injury, Campbell started for the fourth time in the last five games. Campbell, who missed the Edmonton game Monday with a lower-body injury, made 26 saves for the win.

It was career game No. 299 as a Jet for goaltender Connor Hellebuyck, who stopped 23 shots. Only Ondrej Pavelec (379) has played 300-plus games for the franchise.

Matthews opened the scoring at 4:40 to punctuate a sharp Leafs opening. Hyman drove to the net and Winnipeg’s Pierre Luc-Dubois and Derek Forbort ran into each other, leaving Matthews to score from close range.

Forbort, in pain after the collision, briefly went to the Jets dressing room.

Hyman made it 2-0 at 10:47, poking the puck in from in-close after Matthews hit the post following a gorgeous move by Marner — that left six-foot-seven rookie defenceman Logan Stanley sliding into oblivion — as the Leafs top line swarmed the Winnipeg net. The Jets unsuccessfully challenged for goalie interference on Hyman.

Winnipeg closed the margin to 14-6 at the end of the first. Hyman had six shots alone in the period.

The Jets had more life in the second, outshooting Toronto 16-7 in the period. But despite three straight Toronto penalties, they had to settle for exchanging goals with the Leafs.

Paul Stastny appeared to lose a tooth after taking a T.J. Brodie stick to the mouth late in the period as the Winnipeg pain mounted. Kerfoot scored shorthanded on the ensuing double-minor penalty, outpacing Morrissey after the puck got out of the Toronto zone.

Morrissey redeemed himself by scoring on the same power play, his shot beating Campbell through traffic at 17:15, with six seconds remaining in the first of Brodie’s two minors.

Toronto played a controlled third period to preserve the win.