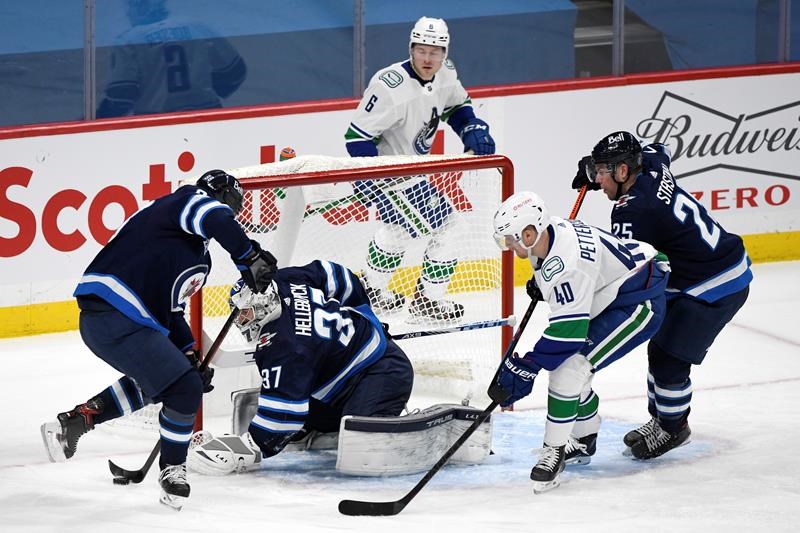 The Vancouver Canucks being brought to a standstill by the COVID-19 virus makes players and coaches elsewhere in the all-Canadian North Division uneasy for that team and their own.

Sixteen of the 22 players on the Canucks’ active roster were officially on the NHL’s protocol list with Sunday’s addition of forward Marc Michaelis and defenceman Jalen Chatfield. A member of the coaching staff had also been affected.

The Canucks are off the ice at least until Tuesday and have had four games postponed because of the virus.

“It’s something that we’ve talked about all season long, is keeping it (COVID) out,” Edmonton Oilers captain Connor McDavid said Sunday. “It’s a huge part of the season, unfortunately.

“What’s happening in Vancouver is a lot more than hockey. We’re obviously hoping everyone is doing all right and families and everyone are OK, and they get healthy as quickly as possible.”

“On behalf of our entire team, I want to thank fans everywhere for their support this past week,” Canucks general manager Jim Benning said in a statement released Sunday. “Our players, coaches and their families are grateful for the messages and we all hope for a return to full health as soon as possible.”

Vancouver’s situation brings home for the rest of Canada’s NHL clubs the pitfalls of operating in a pandemic.

“Try to give yourself the best chance to keep it out as you can. I think all the players are trying to do a good job, but sometimes that virus, it finds its way.

“You feel for those guys out there. Hopefully they can get through it, but it’s certainly concerning.”

The Montreal Canadiens had four games postponed, including three against the Oilers, when a pair of forwards were subject to pandemic protocols in March.

“It wasn’t our team, but it affected us a lot,” McDavid said. “It was kind of a reminder, and obviously with what’s happening with Vancouver just to how important it is to keep this thing out.”

Habs forward Tyler Toffoli, who spent the back end of last season with the Canucks, says he’s been in contact with former teammates in Vancouver.

“Just making sure they’re OK,” Toffoli said Saturday. “It’s definitely a scary situation and hopefully it doesn’t get any worse than what it is.”

Each team in the NHL is scheduled to play 56 regular-season games. The start of the 2020-21 season was delayed until January and shortened because of the pandemic.

Vancouver’s postponed game against Winnipeg on Tuesday will be the 45th pushed back by COVID-19, with the first 37 in the NHL’s three divisions in the United States.

Winnipeg forward Adam Lowry says he’s checked up on former Jets teammate Tyler Myers, who is one of the Canucks on that team’s protocol list.

“First and foremost, we’re worried about their safety, their health and wellness,” Lowry said. “That’s the thing at the forefront. Hockey is second.

“We were all hopeful and tried to do our best to limit the possibility of this becoming a thing or this running through a team like this.

Chris Tanev, who played 10 seasons in Vancouver before signing with the Calgary Flames in the off-season, says he’s also been in touch with former teammates.

“You hope everyone is OK and no one has any serious side effects or anything from testing positive or catching COVID,” Tanev said Sunday.

The Canucks were scheduled to be in Calgary on both Thursday and Saturday, but those games are in question given the scale of Vancouver’s situation.

“The league’s going to make the calls on all that, how long they shut down and if we’re going to play make up games,” Tanev said. “I think everyone is still waiting to see what happens with that.

“Thus far, the Canadian division had been pretty good. Obviously Montreal two weeks ago had their positives and now Vancouver. The restrictions are there and are in place for a reason.”