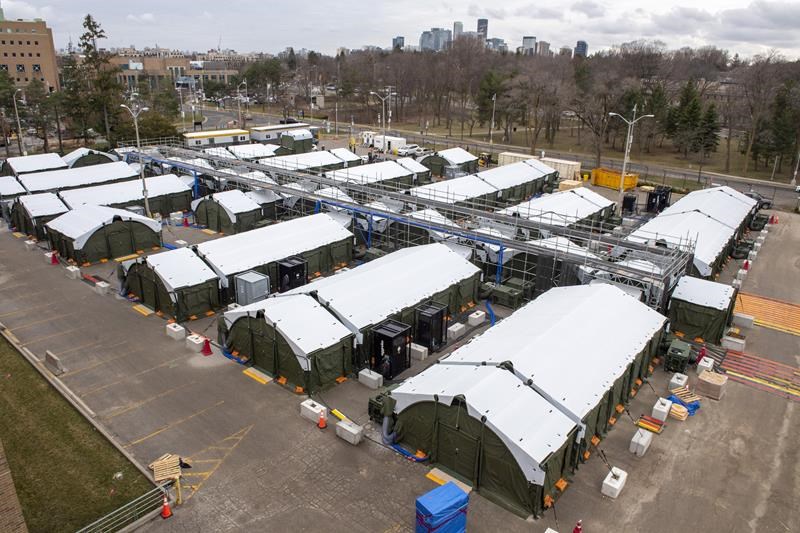 A field hospital in the parking lot of Sunnybrook Hospital is seen in Toronto on Wednesday, March 31, 2021. (THE CANADIAN PRESS/Frank Gunn)

As Ontario implemented a stay-at-home order Thursday and Quebec announced it will expand some curfews to tackle increasing COVID-19 cases, the Canadian Medical Association said continually changing restrictions across the country have led to confusion and less adherence to rules.

The national advocacy group representing Canada’s doctors says people are frustrated and changing approaches are detrimental to the purpose of staving off the pandemic.

“It’s time to apply what we know and address these new variants with the same aggressiveness they are displaying,” Dr. Ann Collins, the group’s president, said in a news release Thursday.

“Facing the new variants requires a new and co-ordinated approach to regain control.”

To deal with the spread of variants of concern, Ontario declared its third state of emergency since the start of the pandemic.

The Progressive Conservative government had loosened some restrictions in lockdown zones last month even as doctors and nurses voiced concerns about increased infections.

A stark change came this week when Premier Doug Ford announced the return to a four-week stay-at-home order.

Dr. Seema Marwaha works as an internal medicine specialist at Unity Health in the Greater Toronto Area and is the editor-in-chief of Healthy Debate.

Along with fatigue from long hours on the front line, Marwaha said she and her colleagues are also fearful.

“This is the first time where I’ve been really scared during the pandemic,” she said.

“What I’m seeing … is younger people getting sicker in a more unpredictable way, in a way that’s more difficult to trace in much higher numbers.”

When intensive care units are full, everything for health-care professionals changes because doctors have less options to offer patients, Marwaha said.

Ontario’s new public-health orders are necessary, but came too late, she said.

“We are at a breaking point now,” she said. “I’m worried about where’s the peak going to be and will we be able to handle it.”

“The trends we are seeing are very troubling,” said Dr. Barbara Yaffe, the province’s associate medical officer of health.

There were 1,417 people in hospital with COVID-19. Of those, 525 were in intensive care — 100 more than the peak number of intensive care admissions during the pandemic’s second wave.

Elsewhere, Quebec Premier Francois Legault announced an earlier curfew coming Sunday for Montreal and the suburb of Laval as the province tightened restrictions for the second time in three days.

That province reported another spike in cases and hospitalizations linked to COVID-19 on Thursday: 1,609 new infections — the highest daily number since January.

Earlier in the week, the Coalition Avenir Québec government closed gyms in red zones, including Montreal, and capped the number of people allowed in places of worship at 25.

Schools and non-essential businesses were closed last week in other regions of Quebec hard hit by the more transmissible variants.

As the variants gain hold in some parts of the country, there have been more people under 60 being treated in hospitals, including in intensive care units.

Dr. Theresa Tam, Canada’s chief public health officer, said in her daily statement that ramping up vaccine delivery is cause for optimism that widespread immunity is on the horizon.

But for now, she said, “the vast majority of Canadians remain susceptible to COVID-19.”

Alberta Premier Jason Kenney issued a warning to United Conservative legislature members that they cannot flout restrictions and expect to remain in caucus. Almost half the party’s 40 backbenchers have openly criticized a return to stricter public-health orders.

The B.1.1.7 variant first identified in the United Kingdom is now the dominant strain in Alberta. Dr. Deena Hinshaw, chief medical officer of health, said Thursday people testing positive for COVID-19 can assume they have the more contagious strain.

There were 1,429 new infections in the province.

British Columbia recorded its highest daily case count since the start of the pandemic Thursday, with 1,293 infections and two more deaths.

The province also shifted its screening strategy away from whole-genome sequencing when looking for variants of concern as those strains become more prevalent.

“We assume that anybody who is positive for COVID-19 needs to be treated as if they have one of these highly transmissible viruses,” said provincial health officer Dr. Bonnie Henry.

Njoo said Canada is in a tight race between getting out vaccines and the spread of variants. Vaccinations are just one part of the response, and public-health measures are important, he said.

More than seven million vaccine doses have been administered and the amount arriving in the country is expected to increase each month.