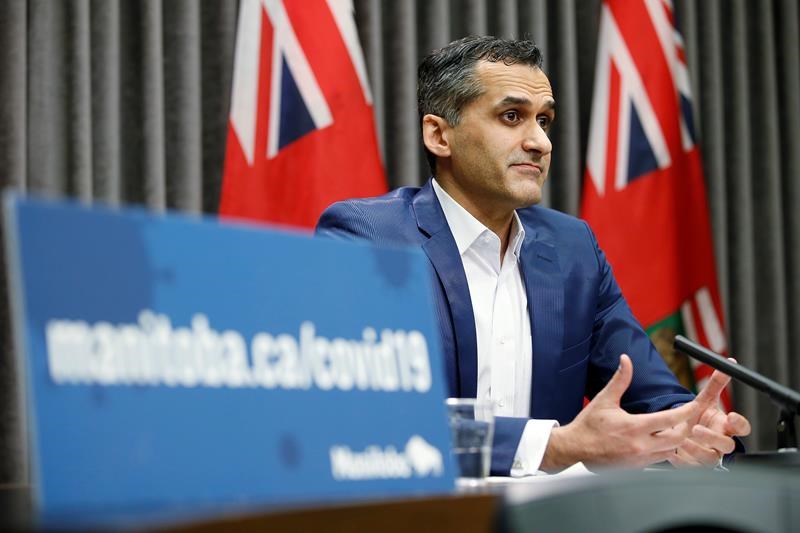 WINNIPEG — A top Manitoba health official warned Friday of increasing signs that a third COVID-19 wave is taking hold in the province due in part to people breaking public health orders.

“This does not align to the orders and it creates a higher risk of transmission.”

A growing number of variants of concern is also adding to the problem. More cases recently involve people under 50, and while fewer people are ending up in hospital, more of those who do end up in intensive care.

One recent case, involving the B.1.1.7 first detected in the United Kingdom, led to several more, Atwal said.

“One individual got infected, related to non-essential travel. This led to the infection of several others,” he said.

“There are six linked cases to this, with at least one in the intensive care unit.”

Manitoba’s infection rate in recent weeks has been well below that of other provinces west of the Maritimes, but daily numbers have risen into the triple digits. Health officials reported 127 new cases Friday and no additional deaths.

The Progressive Conservative government has imposed restrictions that include mandatory self-isolation for anyone arriving from out of province, a 25-person cap on outdoor gatherings, and capacity limits in stores, gyms and churches.

Atwal said the province is considering tightening some measures in the coming days.

“I believe early next week will be a point in time where we’ll be able to present things to the public.”

The province also expanded its vaccine eligibility Friday by dropping the minimum age requirement by two years — to 37 and up for First Nations persons and 57 and up for others.

The provincial vaccine committee is planning to alter the program next week to start prioritizing police officers and firefighters, as well as all adults in high-risk geographic areas.

Exactly which areas will qualify was still being worked out Friday, and the decision will be based on more than just case counts.

“We’ve seen a lot of evidence in the literature … about how different racialized populations are impacted differently, and so items like that will go into the discussion,” said Dr. Joss Reimer, the task force’s medical lead.

WATCH: "We don't want to have to introduce public health measures, but we are working on finalizing our plans. What we introduce will depend on the numbers we're seeing and the epidemiology of the cases over the next short period of time." – Dr. Jazz Atwal #COVID19 pic.twitter.com/dce2lngT8L