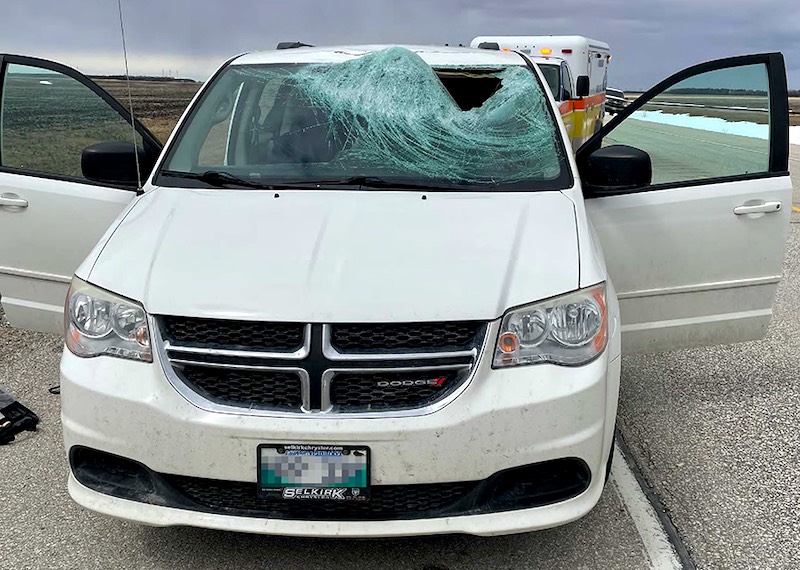 The driver of this minivan was knocked unconscious on Monday afternoon when ice from a nearby truck flew off and broke through the vehicle’s windshield on Highway 6 near Stonewall. (RCMP HANDOUT)

An East St. Paul man was knocked unconscious while driving his minivan Monday when an ice chunk flew off a nearby truck on Highway 6.

Stonewall RCMP responded to the scene just before 1:30 p.m. about four kilometres north of the Perimeter Highway.

RCMP say a dump truck passed the minivan when a chunk of ice flew off the back of the truck and broke through the vehicle’s windshield. The 68-year-old driver was hit in the face and rendered unconscious. His 61-year-old female passenger, also from East St. Paul, was able to steer the vehicle until it came to a stop.

The man was taken to hospital in Winnipeg, where he remains in serious but stable condition.

“The female passenger is very thankful for the help provided to her by other motorists who stopped to assist as well as the first responders who attended to herself and the driver,” RCMP said in a release.

“The RCMP would like to remind everyone to ensure their vehicle is clear of snow, ice, and any other debris before heading out on the road. At highway speeds, debris on a vehicle can become a deadly force.”