By Hina Alam, The Canadian Press 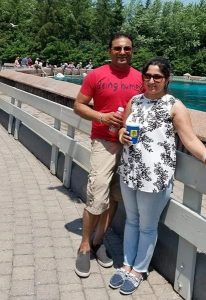 Pankaj Kumar’s wife, who is five-and-a-half months pregnant, was booked on a flight to Canada from India on Sunday.

Now Kumar said his wife, Rupakshi Sharma, will be stuck in Punjab due to the federal government’s suspension of passenger flights from India and Pakistan.

“Her father was diagnosed with cancer and he’s undergoing chemotherapy,” he said in an interview from their home in Brampton, Ont. “She just wanted to spend some time with her father.”

The couple is now worried that if the ban is extended beyond 30 days Sharma won’t be able to come back because of her pregnancy.

Trudeau said it was necessary because there has been a surge of COVID-19 cases and the emergence of more variants of concern in certain parts of the world.

“A determination was made that there needed to be further steps taken,” he said Friday.

Testing at border entries has shown that half the people who have tested positive for the novel coronavirus after arriving in Canada by plane have come from India, federal officials said. There has also been a disproportionate number of positive cases from travellers arriving from Pakistan.

All commercial and private passenger flights arriving in Canada from the two countries were suspended effective 11:30 p.m. Thursday.

The new travel measures were announced following pressure from provincial leaders, who said not enough was being done to keep infectious variants out of the country.

The B. 1.617 variant that appears to be fuelling widespread infections in India has been detected in several provinces.

Kumar said he understands the need for a travel suspension but added that the government should have given people more notice.

“You should notify people at least a week earlier. You can’t say at 5 p.m. that flights are suspended.”

The travel measures require people coming from India and Pakistan through indirect flights to get a negative COVID-19 test in the last place they landed before arriving in Canada.

Cheema said Bashiran was “a bit sad” when she was told by her granddaughter that all flights from Pakistan and India had been suspended.

Bashiran, who visits her son’s family in Edmonton every year, was booked on a flight to Pakistan on May 14.

The family had to scramble to get a visa extension for her.

“Her visa expires on May 15 or 16,” Cheema said in an interview. “We don’t want to overextend her visa stay because that creates complications in the future.”

Flights can go from Canada to Pakistan, she said. But because there are no incoming flights, the airline that she was supposed to fly with cancelled all its outgoing travel too.

Cheema and her dad had a chat with Bashiran about the suspension, including the possibility of it being extended.

“I think she’s waiting and watching,” she said.

“She lives in an open house in Pakistan. But here because it’s so cold, she’s inside and she was really looking forward to going back. Technically, she’s safer here but the mental health component is huge.”

Pakistan’s High Commissioner to Canada, Raza Bashir Tarar, has asked the federal government to reconsider. Tarar said in a letter to Transport Minister Omar Alghabra that the decision to suspend passenger flights from Pakistan betrayed a lack of understanding about South Asia.

“It ignores the fact that both trains and flights are not operational between the two countries (India and Pakistan),” he wrote.

“So the ban on flights from Pakistan because a new variant has developed in another country whose population has no possibility of contact with Pakistan, defies logic.”

He also noted that Pakistan had fewer cases than India and no variants of concern have been detected.

More than a year ago, Canada banned all non-essential travel by land and air from abroad and the border with the United States was closed.

People returning to Canada are required to present a pre-board negative COVID-19 test, get another test upon arrival and quarantine for two weeks.

There are some exceptions for essential workers.

Blair said the further restrictions were added based on advice from the Public Health Agency of Canada.

“We will always do what’s necessary to keep communities safe from COVID.”

Arati Sood’s husband wanted to visit his father who was diagnosed with cancer.

“Luckily, he was able to see his dad and help him,” Sood said from her home in Mississauga, Ont. “But things happen.”

Chakraborty was to return to Canada on April 28.

She is disappointed with the sudden suspension of flights from India. Sood said the government could have increased the quarantine period, asked people to pay for the stay in hotels or even given more notice before suspending flights.

“This last week, we’ve been struggling with one or another thing. And now, this suspension,” she said.

“I just want him to come back home.”