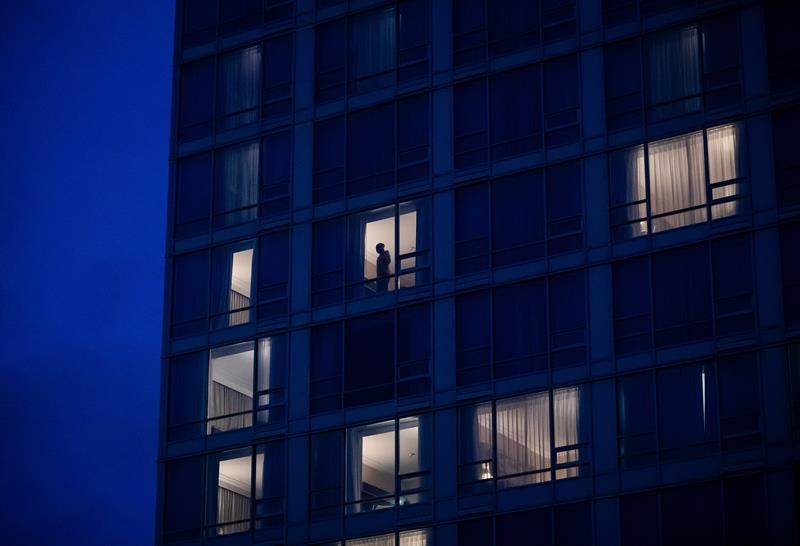 A person stands in the window in a room at a government-authorized COVID-19 quarantine hotel in Richmond, B.C. on Sunday, February 28, 2021. (THE CANADIAN PRESS/Darryl Dyck)

OTTAWA — More than 2,000 people returning to Canada since the federal government brought in mandatory hotel quarantines have tested positive for COVID-19 and more than a quarter of them were infected with a variant of concern.

Data supplied to The Canadian Press by the Public Health Agency of Canada show that between Feb. 22 and April 22, 557 international air travellers tested positive for a variant of concern. Most of them, 518 cases, are the B.1.1.7 variant first identified in the United Kingdom, which is the dominant variant in Canada.

The viruses mutations become “variants of concern” when they are confirmed to spread more easily, cause more severe illness or be resistant to known treatments or vaccines.

Data is not available to show if those passengers are believed to have infected anyone after arriving, but at some point, all of those variants arrived in Canada via travellers, and then spread. There are now almost 95,000 confirmed cases of B.1.1.7, as well 578 cases of B.1.351 and more than 2,000 of P.1.

Those numbers have opposition parties and provincial governments begging Ottawa to take even more steps to keep travellers from bringing COVID-19 into Canada with them.

Last week, Canada did bar flights from India and Pakistan for a month after too many planes landed carrying infected people. But they are far from the only source.

Between April 7 and April 24, the public health agency identified 165 flights from 19 countries, with at least one passenger who later tested positive for COVID-19.

Epidemiologists agree the border measures should be strengthened, but say keeping COVID-19 from spreading requires more than just border closures.

“I think the border control restrictions and monitoring is only the beginning, it’s only one cure,” said University of Saskatchewan epidemiology professor Nazeem Muhajarine.

“It has to be complemented with a whole suite of measures. That alone is not going to actually amount to anything, really.”

He said rapid testing and good contact tracing is a must, as is swift action to contain outbreaks when they are identified.

Ottawa has required a two-week quarantine for international arrivals since March 2020, but only since Feb. 22, have air passengers had to spend three days of that in a quarantine hotel. As the variants arose, Canada also began requiring negative COVID-19 tests before boarding a plane, and from air and land border travellers upon arrival.

Another test is now required at day eight. It was day 10 until April 23.

Health Canada has not been able to provide data for how many passengers tested positive after leaving hotel quarantine. It also can’t provide test results for any of the 297 people who paid a $3,000 fine for failing to stay in the quarantine hotel.

Susanne Gulliver, an epidemiologist at NewLab Clinical Research in St. John’s, N.L., said part of the issue is that for all land travellers, and for most of the quarantine period for air passengers, they’re on their own.

Australia, New Zealand, Singapore and South Korea, all with much lower COVID-19 rates than Canada, require travellers to quarantine for two full weeks after arriving.

Gulliver said three days with supervised quarantine is not enough.

“It should be supervised for the entirety, for both their protection and the protection of the public,” she said, noting if someone gets sick in quarantine they can be monitored to ensure they get medical help if they need it.

Prime Minister Justin Trudeau defends the government’s policies as among the strongest in the world, and says most of the travellers are Canadians who cannot be refused entry.

He also said less than two per cent of all Canada’s confirmed cases of COVID-19 are from travellers, or someone who came into contact with a traveller.

Muhajarine said however that a single case from a traveller, can infect several people in Canada which starts a cascade of community spread that aren’t labelled as travel cases once they’re passed on more than once.

Muhajarine and Gulliver both point to the Atlantic bubble as a place where restricting entry, even to Canadians from other provinces, worked well because they were accompanied by quick government action to lock things down if an outbreak occurred.

Gulliver noted quick action shut down an outbreak of the B.1.1.7 variant in Newfoundland in February. Nova Scotia implemented a provincewide lockdown Wednesday the day after a record 96 cases were reported in the province.

Australia is similar. Perth and a neighbouring region brought down the hammer for three days recently after just two cases were reported. Similar lockdowns have happened many times in Australia, which has confirmed fewer than 30,000 cases of COVID-19 overall, a rate of 117 for every 100,000 people.