Home » The Canadian Press » J&J Vaccine Can Be Used for People Over 30 But mRNA Vaccines Still Preferred: NACI

J&J Vaccine Can Be Used for People Over 30 But mRNA Vaccines Still Preferred: NACI 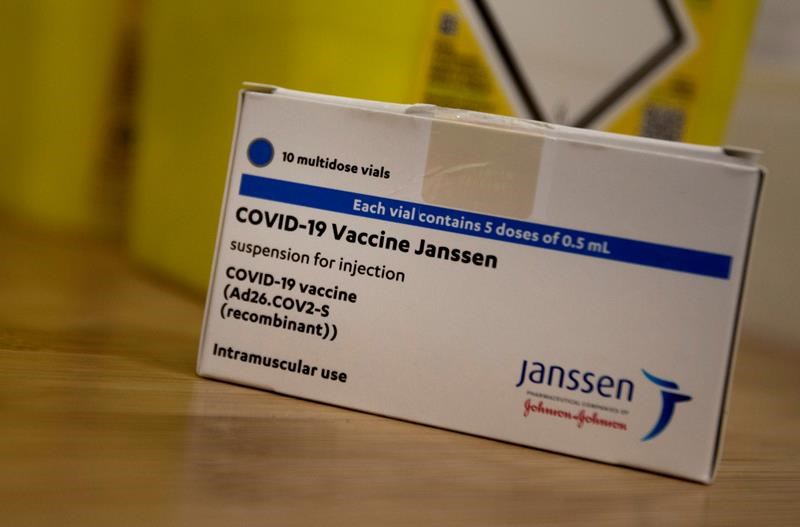 A box containing vials of the Janssen, Johnson & Johnson, COVID-19 vaccine sits on a pharmacists table at the Vaccine Village in Antwerp, Belgium, Friday, April 30, 2021. (THE CANADIAN PRESS/AP-Virginia Mayo)

OTTAWA — The Johnson & Johnson vaccine should be limited to people over the age of 30 who don’t want to wait for Pfizer-BioNTech or Moderna, the National Advisory Committee on Immunization said Monday.

The advice is almost identical to that issued by the expert panel for the Oxford-AstraZeneca vaccine last month and comes as both are suspected of causing a new and exceedingly rare blood-clotting syndrome.

“The viral-vector vaccines are very effective vaccines, but there is a safety signal, a safety risk,” NACI vice-chair Dr. Shelley Deeks told a virtual news conference.

“And the issue with the safety signal is that although it’s it’s very rare, it is very serious. And so individuals need to have an informed choice to be vaccinated with the first vaccine that’s available, or to wait for an mRNA vaccine. They need to be aware that those are the options available to them.”

Deeks said the issue is not whether one vaccine is better at preventing COVID-19, but the fact that two vaccines have this known safety risk, and the mRNA vaccines do not.

Some countries have opted to stop using viral-vector vaccines entirely because of the safety risk, when they have enough mRNA vaccines available to them. That includes Denmark and Norway.

Canada is getting enough Pfizer and Moderna for all Canadians by the end of September, but will vaccinate more people faster by also using AstraZeneca and J&J.

For people who can stay away from potential exposure, or who aren’t likely at all to get seriously ill from COVID-19, the risk-benefit analysis suggests waiting for mRNA is the better choice.

The risk of vaccine-induced thrombotic thrombocytopenia, or VITT, is estimated to be anywhere from one case in 100,000 doses given, to one in 250,000, but the syndrome is so new, there is still little known about why it is happening and who might be more likely to develop than syndrome than others.

Seven cases have been reported to date in Canada, all in people who received the AstraZeneca vaccine. About 1.7 million doses have been given out as of April 24.

Canada’s first 300,000 doses of J&J are being stored at a Toronto-area warehouse pending investigation to ensure they are safe after discovering they were partly made at an American facility cited for safety and quality-control violations.

Health Canada put the doses on hold Friday pending further information from the company and the U.S. and Food and Drug Administration. It provided no update Monday on the status of that review, what information it was specifically seeking, or when the review might be concluded.

Both AstraZeneca and J&J are viral-vector vaccines, a technology that takes a common cold virus, manipulates it so it can’t replicate and make someone sick, and then attaches the spike protein of the SARS-CoV-2 virus that causes COVID-19. The vaccine helps the body mount an immune response that will recognize and fight off a real SARS-CoV-2 virus if it is ever exposed to one.

Pfizer and Moderna use mRNA technology, attaching the spike protein to messenger RNA, a molecule that delivers messages to the body to carry out certain functions. In this case the message is to mount an immune response to the SARS-CoV-2 virus.

So far in Canada, 12.8 million people have received at least one dose of a vaccine. About two-thirds of them received Pfizer, one-fifth received Moderna and the rest AstraZeneca.

Deeks said NACI is set to provide advice on whether a second dose of a different vaccine can be offered but is waiting for clinical trials testing combinations of vaccines to be completed. Some data is expected on that this month.

She said as of right now there is no reason people should avoid getting their second dose of AstraZeneca when it is offered.

Health Canada has said the only reason not to get a second dose would be if you developed VITT after the first dose.