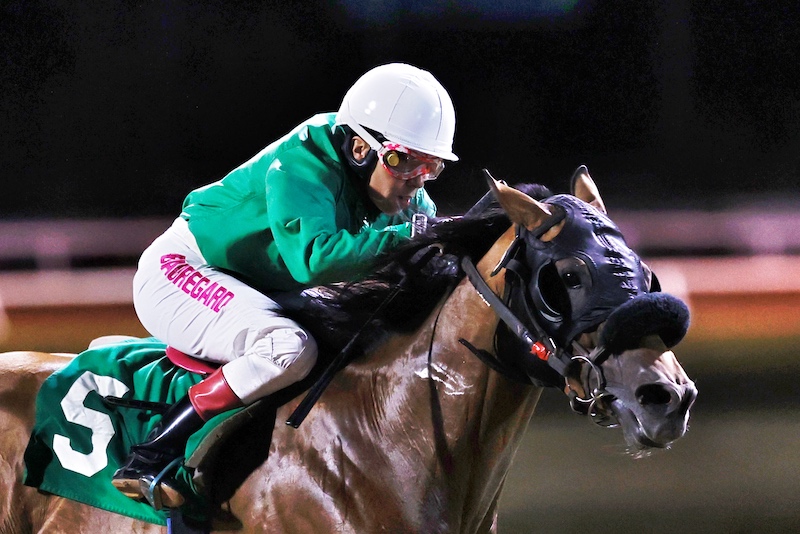 Here’s the good news: It’s eight months later and injured jockey Shannon Beauregard can walk. By her own admission, she can’t walk for long periods, but she’s still well ahead of her doctors’ original schedule.
Last year might have been Beauregard’s best, after 16 seasons as a professional jockey. The 39-year-old Assiniboia Downs rider picked up her 900th career victory riding Tom Gardipy Jr.’s Yesitsmejohnny G from the middle of the pack to a decisive two-length win over a field of nine. She placed seventh in the jockey standings at ASD with 24 wins and $223,089 in earnings on 159 mounts. And there was so much work in Western Canada, that she was able to fly back and forth between Winnipeg and Edmonton in order to ride at both Assiniboia Downs and Century Mile.

“It couldn’t have been a better time for me,” Beauregard said, via phone from her home in Edmonton. “To get my 900th career win for Tom was the best for me because Tom was the man who gave me my first shot when no one else would hire me to ride. I hadn’t had that much fun riding in a long time. Things were going so well last year.”

And then, in the blink of an eye, everything literally came crashing down on top of her.

It was the third race of Century Mile’s Saturday evening card last September 19, and Beauregard had a favourite to ride in her 100th start of the season in Edmonton.

And on this night, it appeared as if she’d also notch her 905th career win. Her horse, a gorgeous two-year-old Kentucky bred named Dark Invader was just strides from the finish line when her greatest year turned into her worst nightmare.

“I was passing the field easily, I had a very nice horse,” Beauregard said. “I was drawing off and then I felt him falter him underneath me. When a horse falters like that, it’s not good. He didn’t bobble or anything, but I remember thinking ‘Oh, no!’ Although I probably used a more inappropriate word. I started pulling on him and he probably went five or six more strides and he went down. His knee exploded.

“So, I went down and yelled ‘Ow! Ow! Ow!’ and as I lay there for a second, I thought, ‘OK, that wasn’t so bad.’ Then, in the time of thinking that, the horse behind tried to jump over my horse and he didn’t make it and I’m told he did a belly flop right on top of me and right away, I was screaming. I knew my hip was broken. I remember the medic coming over and moving my leg and I just screamed.

“I broke my pelvis and my left hip in multiple places right through. These weren’t little fractures. I broke the bones in half. My surgeon said, ‘Most people don’t break a hip right through. It’s a hard bone to break in half.’ I broke mine right through in multiple places. That’s what happens when you have a 1,000-pound horse land on top of you. And when they got me to the hospital, my whole left side almost fell off.”

Beauregard also fractured her right hip although it wasn’t broken right through the bone. The top of her pelvis was broken, the top of her leg was shattered, her tailbone was broken and the hip was demolished.

“My surgeon said, ‘I’ve been doing this for a long, long time and what you did is unheard of. You would have to have a 1,000-pound horse belly flop on you and even with that I don’t think we could re-create the breaks you had,’” she explained. “They put me in a halo (external fixator) and the rods were six inches into the bone. The screws got loose and they started moving around and that really hurt. But my pelvis was healing so after six weeks, they took the halo out. I was supposed to be in it for three months, but they were able to take it out after six weeks.”

She had two major surgeries for her hip and pelvis but also used the time during rehabilitation to have surgeries on her hands for carpal tunnel syndrome. Apparently, when she landed, all the nerves were pinched in her wrist and the pressure on her hands needed to be relieved. She didn’t have feeling in her left hand until two months after the accident so in January she had her left hand repaired and in February doctors operated on her right hand. 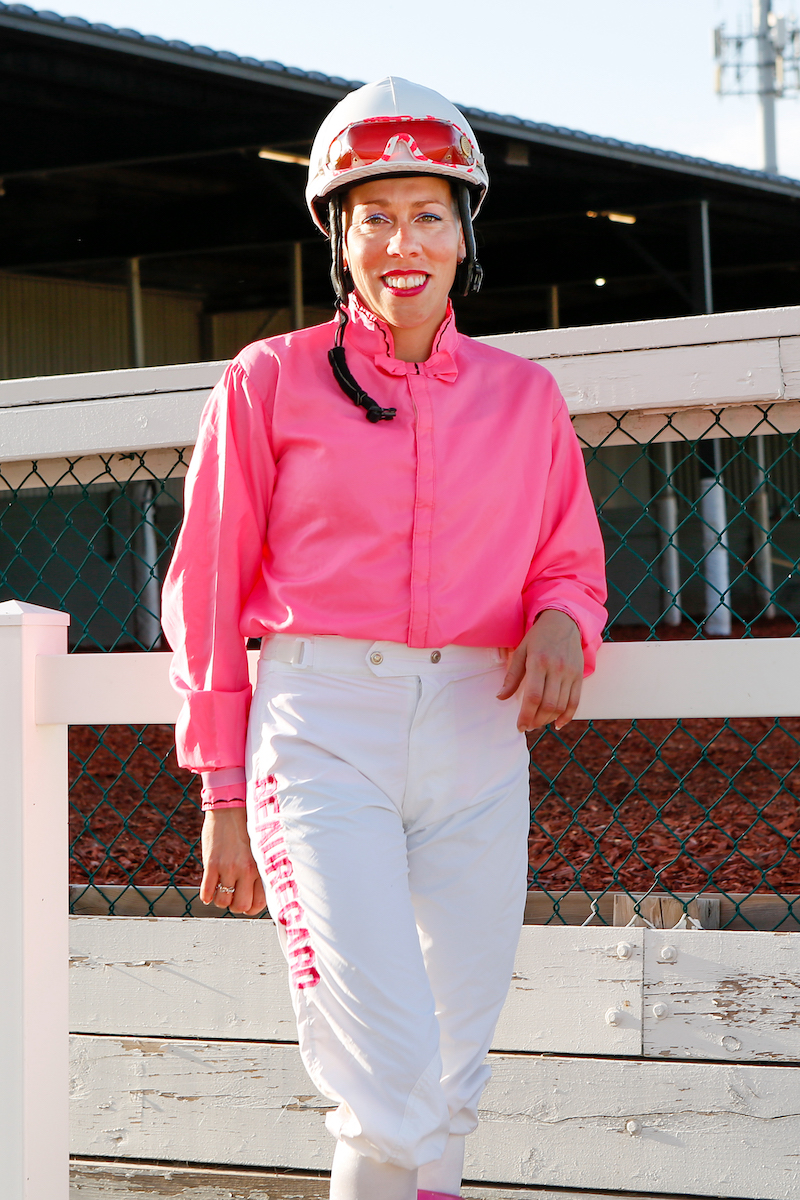 Needless to say, she’s a long way away from riding again.

“Also, when I went down my leg and foot on my left side went numb,” she said. “Once that numbing started to subside, I had a lot more pain. Apparently, when I landed, there was chipped bone in my ankle and my heel had exploded. So now, I have inserts for my left shoe to help when I step. I can’t walk much, but if I do walk too much, my heel really hurts. And I just booked another appointment with my surgeon just to have my hip looked at because I’m doing physio, but I can do very little without quite a bit of pain. I feel like there is something popping in my hip. It’s been so hard and I’m still not good.”

Early in her career, she got tangled up coming out of the gate, slid off her mount and had the horse step on her ankle. It was broken, but she rode the entire meet despite the injury.

In 2012, she suffered a major concussion in a riding accident and was out of action for 18 months. Three weeks after she returned to the track, a horse flipped on her and she tore her ACL.

“I took a few days off and then rode with it,” she said matter-of-factly. “At the end of the season, I went and got a new one.”

In 2014, she was thrown from a horse and broke her back and doctors did not believe she’d ever ride again. She declined surgery, slept on a recliner for a number of months and let the injury heal on its own. She was soon back in the saddle but then broke her back a second time.

“I’m working on all of my spine,” she once said, laughing uncomfortably. “I broke vertebrae two-through-eight the first time and then nine and 10, the second. In total, I’ve probably missed four years of my 16-year career with injuries.”

Make that at least five of 17 years.

Of course, don’t ever doubt Beauregard’s resolve. She says she’ll return next year and she’s committed to it.

“This injury is quite a bit harder physically than when I broke my back,” she said. “This time the doctors said it will be a year to a year-and-a-half, but they said the same thing when I broke my back and I was back racing in eight months and that’s when I broke eight vertebrae into 39 pieces. And when I had my concussion, they said, ‘You’ll never ride again,’ and I proved them wrong. Then I blew out my knee and rode right through it, then I broke my back again and came back.

“But this injury has been very, very hard. My chiropractor believes I will ride again, but she also said,’ You’re lucky you can walk.’ The doctors said I wouldn’t walk for five months and I was walking in two months and they told me I shouldn’t be walking without my walker. So, I’m ahead of where the doctors say I should be, but mentally, I want to be further ahead.

“Especially with the track opening and the horses coming back and all I can think of is ‘Who’s riding my horse?’ I’m going to miss being in Winnipeg this year. I had so much fun last year. I have to phone Tom (Gardipy Jr.). He’s the kindest man on earth. He’s the only guy who would give me a shot back when I started riding and I love him and I feel like I owe him so much. I wish I could just go back to Winnipeg to visit.

“As it much as it kills me to say this, I’m quite a long ways away. I can walk but only a little. I’m a long way from being physically fit enough to kick some ass as a jockey right now. I keep saying I’m going to be riding again and my plan is to return to riding as soon as I can, but in all honesty, it isn’t going to be happening for a while.”