More Than 5,000 International Air Travellers Positive for COVID-19 Since February 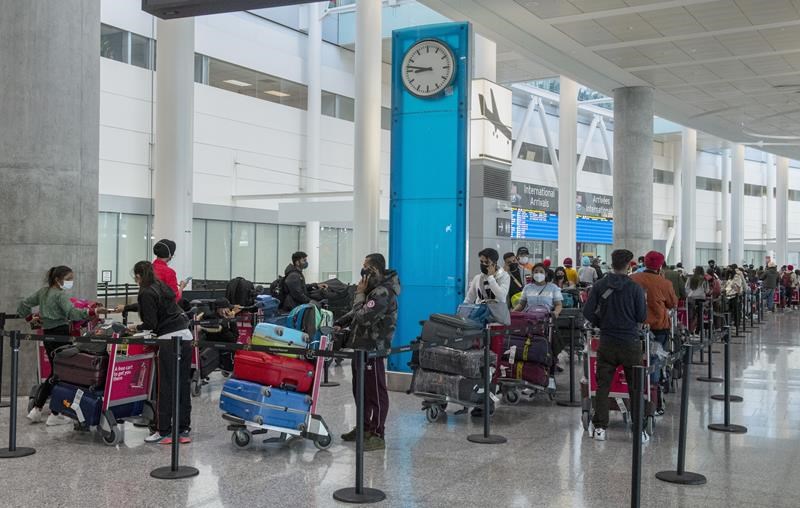 Passengers from New Delhi wait in long lines for transportation to their quarantine hotels at Pearson Airport in Toronto on Friday, April 23, 2021. (THE CANADIAN PRESS/Frank Gunn)

OTTAWA — More than 5,000 people tested positive for COVID-19 after flying back to Canada since mandatory quarantine hotels began in late February.

Thus far, variants of interest or concern have been identified in almost one-third of those cases.

Data provided by the Public Health Agency of Canada lists 3,748 people who tested positive the day they returned despite having to show a negative COVID-19 test taken no more than three days before they boarded their plane.

Another 1,411 people came back positive for COVID-19 on the test required 10 days after they returned.

It is now the dominant variant in Canada.

The travel numbers are relatively small compared to Canada’s total caseload — there were more than 342,000 cases of COVID-19 between Feb. 22 and April 29 — but provincial premiers are nonetheless pressuring Ottawa to do even more to keep faster-spreading variants from getting into Canada on planes.

But Canada’s top doctors said Friday there is too much focus on the border and not enough on stopping COVID-19 from spreading within Canada.

“There seems to be a lot of interest and almost, I would say, a (preoccupation with the borders) but at the end of the end day, if you look at the actual risk in terms of importation, the actual number of cases with respect to people crossing the border compared to what’s happening in the communities in many of the hardest hit provinces, I think that’s where the public health focus has to be,” said Deputy Chief Public Health Officer Dr. Howard Njoo at a news conference April 30.

As the new variants began emerging around Christmas, Canada first began requiring negative tests taken no longer than 72 hours before boarding a flight to Canada, then in late February, imposed mandatory hotel quarantines.

All international air passengers are required to spend up to three days in a designated quarantine hotel near one of the authorized airports in Toronto, Vancouver, Montreal and Calgary. Once they get a negative test result they can return home to finish their two week quarantine there, but must provide a second test result.

Initially the second test was required on day 10, but it is now on day eight.

On April 23, Canada banned flights from India and Pakistan because of the high number of positive COVID-19 cases on those flights. In the two weeks before that decision was made, 165 flights carried at least one person who later tested positive, 43 of them from India.

Almost every flight that landed from India had at least one positive COVID-19 patient.

Overall about 1.5 per cent of international air travellers tested positive, according to the PHAC data.