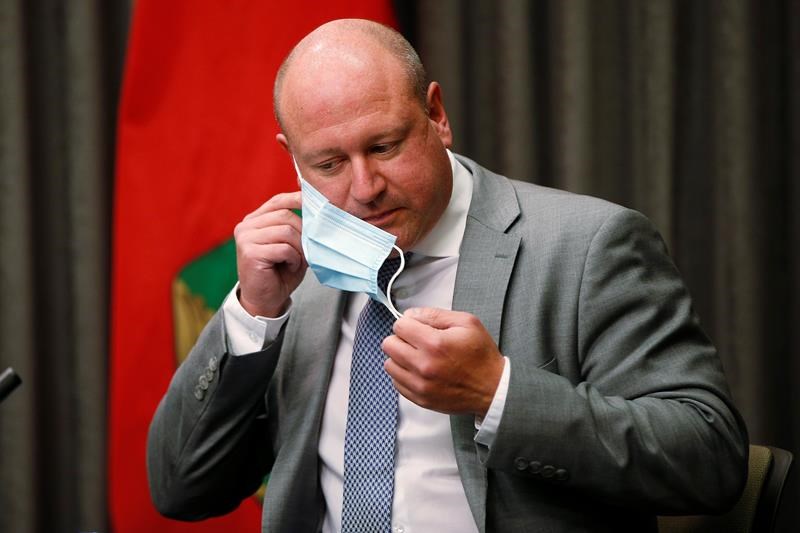 WINNIPEG — Manitoba’s top doctor told a court challenge of the province’s public health rules Friday that restrictions on faith-based gatherings had to be imposed because health care was being overwhelmed during the pandemic’s second wave.

Seven churches are fighting public health orders meant to stem the spread of the COVID-19 virus.

“We could not be wrong,” Dr. Brent Roussin testified in Court of Queen’s Bench. “We had to limit places we knew transmission was going to occur because our hospitals were full.”

At the time, non-essential stores were also shuttered and group gatherings banned as cases surged and a deadly wave of infections swept through long-term care homes.

“We had to act on the trends we were seeing. We were in crisis.”

Roussin, who has a medical and a law degree on top of a master of public health, has been the face of Manitoba’s response since the beginning of the pandemic.

The churches are arguing their right to worship and assemble has been violated by the restrictions, which has led to “a crisis of conscience, loneliness and harm to their spiritual well-being.”

Public health orders targeting churches were loosened in January. Worship services are currently restricted to 10 people or 25 per cent capacity, whichever is less, and everyone is required to wear a mask.

Government lawyers have told court it’s within the bounds of the legislature to grant the chief public health officer authority to impose reasonable rules.

Jared Brown, a lawyer for the churches, questioned if the application of public health orders was fair, whether enforcement was applied evenly and if the restrictions were successful.

“Shutting down churches has not stopped community spread,” Brown said.

Roussin said cases dropped after the restrictions came into place. But he agreed that community transmission is still taking place and added the more infectious variants have brought new challenges.

The Manitoba government reported 502 new COVID-19 cases Friday, the highest one-day count since the pandemic’s second wave. Health officials said they are adding intensive care beds to prepare for a surge of hospitalizations.

Brown spent much of his cross-examination asking Roussin about studies, data collection and the efficacy of the PCR test, one of the main ones used to detect the virus.

Roussin said PCR tests have been important to understand what is happening in the community. Seven per cent of positive cases show up in hospital about 10 days later.

He told court there would be severe economic and societal consequences if COVID-19 were allowed to spread unchecked.

Roussin testified that hospitals fill up and more health-care workers are out sick when there’s significant community infection. It can mean serious problems even for people who don’t have the virus but need health services.

He said that the goal with public health orders is to keep people safe, avoid deaths as much as possible and minimize social disruption. The province is still studying some of the unintended or unexpected consequences of the orders, he added.

Roussin told court many physicians and nurses have called for even tighter restrictions.

The constitutional challenge is one of the latest attempts by churches across the country to quash pandemic restrictions on faith gatherings.

The Justice Centre has filed similar challenges in Alberta and British Columbia.

In Alberta, a pastor accused of violating public health orders was on trial earlier this week.