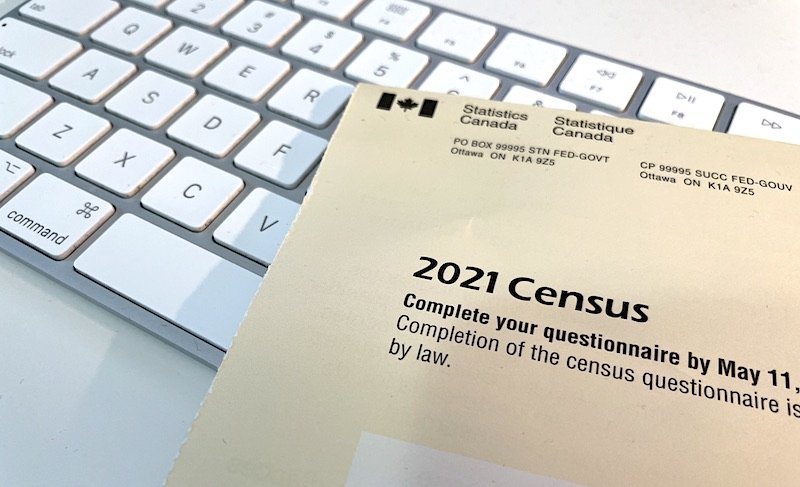 A Statistics Canada 2021 Census mailer sits on the keyboard after arriving in the mail at a residence in Winnipeg, May 8, 2021. (CHRISD.CA)

OTTAWA — Statistics Canada says the response to the census is higher than the agency expected to far, with online submissions coming from some remote communities for the first time.

Census cards with information about how to fill out the short- and long-form questionnaires went out to households in the last week ahead of census day on May 11.

One reason for the higher online response involves a pandemic-related change the agency made this year to allow anyone in the country to file through the internet-based form for the first time.

Geoff Bowlby, director general at Statistics Canada responsible for the census, says the agency assumed in previous census cycles that remote parts of the country didn’t have enough internet coverage to allow for online responses.

Now, he says, the agency is getting responses at a faster rate than expected from urban centres, First Nations, rural and remote communities.

Bowlby says the agency has even received a response from as far north as Grise Fiord in Nunavut, which registered a population of 129 in the last census five years ago.

The agency had expected about eight in every 10 people to respond to the census online, but that number could change as Bowlby noted that fewer people are requesting paper questionnaires.

He says having more online responses makes life easier for agency analysts, and safer for workers who will have to manually input fewer paper replies at a processing centre in the National Capital Region.

Analysts will spend the coming months sifting through the data gleaned from the census forms before releasing results in 2022.

The census, which takes place once every five years, provides the most detailed look at Canadians, leaving a wealth of information for demographers to review to see how the country continues to change.

For policy-makers, the census provides the base for local decisions on where to build new schools and hospitals, and how much the federal government sends to provinces and territories in transfers payments to pay for health-care systems.

But the pandemic has thrown a statistical wrench into the paint-by-numbers portrait of the population as daily routines have changed over the last year due to COVID-19.

Bowlby says the agency is looking at how to analyze responses to questions affected by the pandemic, such as a commute to work that for some people has been replaced by a walk down the staircase to a home office in the basement.

“We’ve had the same kind of conversations at our workplace. We’re all working from home at StatCan and can relate to how people might have difficulty responding to some of the questions because of COVID,” Bowlby said.

“As a result, we’re aware of this and there is, in fact, guidance for any respondent who is having trouble understanding how they should respond to those questions.”

The agency will again use existing data held by governments, such as income information from the Canada Revenue Agency, to supplement or replace parts of the questionnaire.

Statistics Canada had been working on ways to use these administrative data to potentially replace the short-form census that asks questions on the number of people in a home, their ages, and relationships.

It had to test those efforts five years ago when it used administrative data to help enumerate Fort McMurray during the wildfires that devastated the Alberta city.

Bowlby says the agency is still studying how a digital register of the population might work, citing technical barriers and the need to consult Canadians should it ever decide to replace parts of the questionnaires.

“If we were to replace some parts of the census, we have to be absolutely sure that … doesn’t impact the quality of the information that Canadians expect of the census,” he said.

“You can see how Canadians are enthusiastically taking up the census. There is a sense of pride in responding to the census form.”

This report by The Canadian Press was first published May 8, 2021.