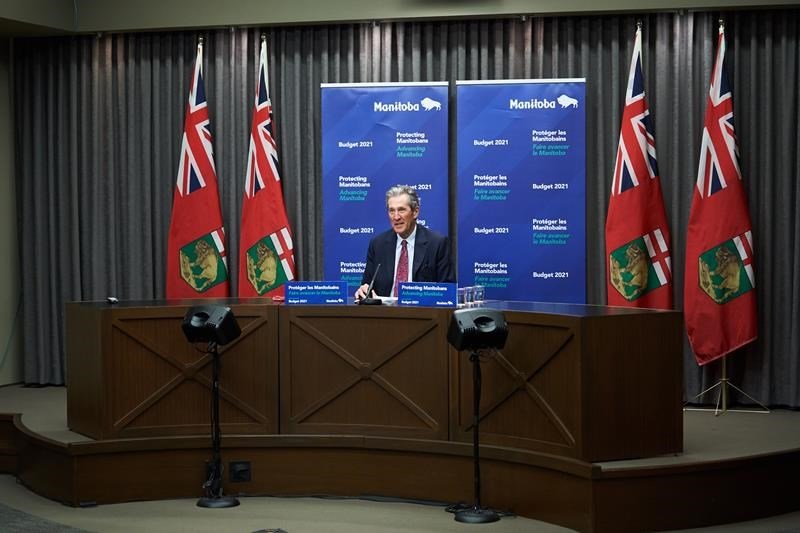 “This decision was not made at all lightly. Keeping our schools safe and open has always been our objective,” Pallister said Monday.

Health officials announced on Mother’s Day that students in kindergarten to Grade 12 in Winnipeg and Brandon would begin remote learning on Wednesday. Infections in the province’s two largest cities have surged in recent weeks.

There were 498 new cases of COVID-19 on Monday and four more deaths linked to the virus. Health officials have said 20 per cent of active cases are in school-aged children.

The province also reduced the age of vaccine eligibility to 30 and to 18 and over for Indigenous people.

Pallister said proactive decisions by the province delayed the pandemic’s third wave, but he added it is now in the province and having a larger effect on younger people.

He said the goal is to shorten the length and impact of the wave.

“Our No. 1 challenge right now is to play defence,” Pallister said.

Opposition NDP Leader Wab Kinew accused the Tories of once again leaving families scrambling to find child care and figure out how they will move their children to online classes.

“We are dealing with a third wave that’s made worse because our government has not learned from the mistakes they made in the first and second wave,” Kinew said.

Not all households in which a member was waiting for a test result have isolated, people have gone out because their symptoms were mild and there have been large gatherings.

“We’ve seen a lot of transmission chains that could have been avoided,” Roussin said.

The province tightened restrictions Sunday to curb the spread. It closed restaurants, bars and patios to in-person dining.

Gyms, museums, art galleries and libraries were closed and indoor religious services are prohibited. Barbers, hair salons and estheticians have also had to shut their doors.

Pallister, saying he understands businesses need to keep paying bills, announced payments from a grant program will be made for a fourth time.

Eligible small- and medium-sized businesses, non-profits and charities can apply for up to $5,000. An extra $2,000 will be available for restaurants.

Pallister added his Progressive Conservative government is working on a road map leading out of the pandemic, which he hopes will provide Manitobans hope and help people comply with health orders.

Health officials said Manitoba’s plan will be connected to vaccine rates. It will also consider hospital capacity and case numbers.