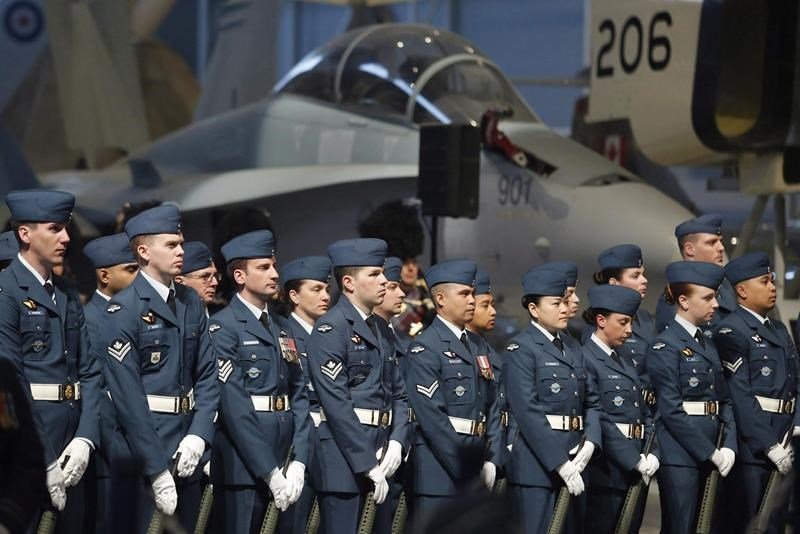 Members of the RCAF take part in a Royal Canadian Air Force change of command ceremony in Ottawa on Friday, May 4, 2018. (THE CANADIAN PRESS/ Patrick Doyle)

OTTAWA — Canada should open its doors to military pilots from other countries as it seeks to address a critical shortage of experienced aviators to fly its helicopters and planes, according to the head of the Royal Canadian Air Force.

In an interview with The Canadian Press, Lt.-Gen. Al Meinzinger said the military is currently working with Immigration, Refugees and Citizenship Canada to facilitate and streamline the enrolment of seasoned pilots from overseas.

“We would not be in a position to influence … or demand certain outcomes,” he said. “But I do think it’s a valuable opportunity space for us to continue to leverage individuals who want to come to Canada and want to serve still as an air force member.”

The initiative is the latest in a long list of moves by the air force in recent years as it has scrambled to make sure it has enough experienced pilots to both train new recruits and lead air missions at home and abroad.

The seriousness of that pilot shortage has been repeatedly noted by military officials and others such as the federal auditor general, prompting concerns about the short- and long-term impacts on Canada’s defence and security.

Yet most of that progress can be traced to a reorganization that saw about 60 unfilled pilot positions reclassified into what the air force calls “air operations officers,” which are responsible for planning and co-ordinating missions rather than flying them.

The progress has been less than the military and government had hoped.

Efforts to retain experienced personnel have been underway since 2018. They include providing better supports for military families, tapping reservists to help with basic maintenance work and creating the air operations officer position to keep pilots in the air rather than working desk jobs.

There was also optimism at the start of the COVID-19 pandemic that the financial difficulties facing commercial airlines would result in an influx of former military pilots who had left for private-sector gigs but were now furloughed or unemployed.

Despite a dedicated unit in his office responsible for reaching out to former air force personnel and an advertising campaign touting the benefits of re-enlisting, however, Meinzinger said only about 15 pilots have decided to put their uniforms back on.

“It’s not a significant number,” he acknowledged. “I would rationalize it in that individuals may have already transitioned into a civilian job and they’re probably trying to ascertain whether they can maybe get their old job back or in some cases, individuals have been furloughed.”

It is in this context that Meinzinger is hoping to ensure pilots who have flown with other militaries and now want to fly for Canada aren’t blocked by bureaucratic red tape or other technical barriers.

The air force commander suggested the majority of those who would be interested in putting on a Canadian Armed Forces uniform are from NATO or European countries, but may also hail from others such as India.

“Of course, we would value that clearly because often they have thousands of hours of experience and it’s a great opportunity,” he said.

The push for more pilots comes amid challenges in the military’s entire recruiting and training systems caused by the global pandemic. Acting chief of the defence staff Lt.-Gen. Wayne Eyre has said recruitment was down by two-thirds last year.

Meinzinger said that decline has had an obvious impact across the air force, which was exacerbated by the closure of various training institutions due to the pandemic.

“That will be a challenge for us,” he said. “We will strategically have to manage that demographic issue.”