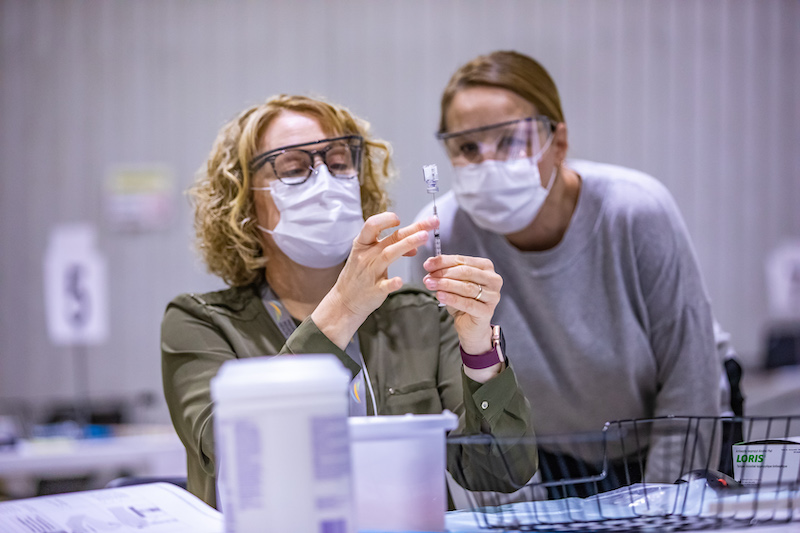 Jennifer Cochrane, a public health nurse with Prairie Mountain Health in Virden, readies the first dose of the Pfizer-BioNTech COVID-19 vaccine during the first day of immunizations at the Brandon COVID-19 vaccination supersite at the Keystone Centre on Monday. (GOVERNMENT OF MANITOBA)

WINNIPEG — The Manitoba government is preparing to open COVID-19 vaccine appointments to everyone aged 18 and older starting Wednesday.

Premier Brian Pallister mentioned the change in the legislature, hours after the province reduced the minimum age among the general population to 24 from 30.

“We need to get Manitobans vaccinated and we are,” Pallister said in response to questions from the Opposition New Democrats about the vaccine rollout.

Tracking by the federal government has shown Manitoba consistently a few percentage points behind neighbouring provinces in terms of the percentage of the population that has received at least one dose.

The province has prioritized some groups of people for faster access, such as health workers, Indigenous people and residents in areas of high transmission, who have already been eligible at age 18 and up.

Pallister’s announcement came amid more evidence the province is in the middle of a third pandemic wave.

Health officials reported 329 new cases Tuesday. COVID-related intensive care bed use remained high at 59 patients, and the percentage of people testing positive over the past five days stood at 12 per cent provincially and 14.2 per cent in Winnipeg.

The Progressive Conservative government also introduced a bill that would require employers to give workers up to three hours off with pay to get vaccinated.

Finance Minister Scott Fielding said the measure mirrors what other provinces are doing and should help the effort to get more doses into arms.

“We’re obviously at a very critical point in Manitoba’s third wave … immunization is crucial to protect ourselves, to protect our neighbours and those around us,” he said.

Labour leaders have called on Fielding to enact mandatory paid sick leave for infected workers. The province has so far offered a voluntary program in which employers can get up to $600 per worker for days off due to self-isolation or illness.

Fielding said employers seem very willing to offer the leave, but did not directly answer when asked repeatedly what was stopping the government from making it mandatory.

“We think that it’s a program that businesses are going to embrace.”

← Previous: Manitoba Proposes Paid Leave for Workers to Receive COVID-19 Vaccine Next: Hope for a Good Summer with One Dose in Arms, If We 'Crush' COVID-19: Trudeau →
Tags: Coronavirus | Health | Manitoba | Winnipeg