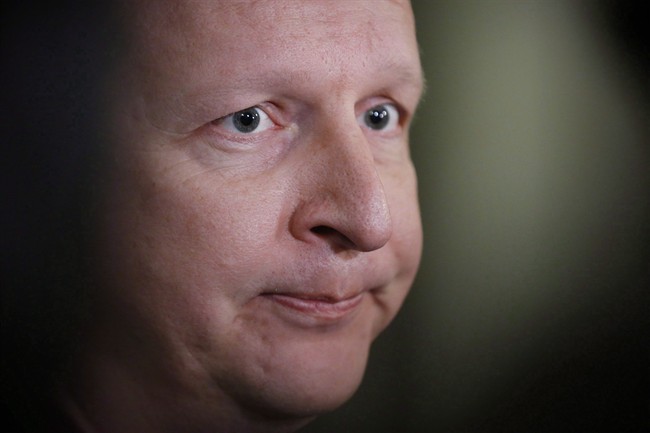 Kevin Rebeck, President of the Manitoba Federation of Labour, speaks to media outside the legislature after the provincial throne speech was read at the Manitoba Legislature in Winnipeg, Tuesday, November 21, 2017. (THE CANADIAN PRESS/John Woods)

The decision, announced on Sunday, will boost MFL’s membership to 120,000. As part of the affiliation, MTS will sit on the MFL’s executive council and MTS members will also be able to participate in the MFL’s educational opportunities, committees and campaigns.

“This weekend, the Manitoba Teachers’ Society formalized its long and valued relationship with the Manitoba Federation of Labour,” said MTS president James Bedford.

“MTS’ participation in the MFL’s Partnership to Defend Public Services and its defeat of Bill 28 is but one example of the power of a united voice for labour in this province. We look forward to this exciting new chapter in our advocacy work as together, we are stronger.”

Bedford added the time was right to affiliate amid growing concern among teachers surrounding the Pallister government’s plans for Manitoba’s education system.

“Manitoba’s teachers do incredible work and they have gone above and beyond for students this year,” said MFL president Kevin Rebeck. “We have always had a close partnership with the MTS, and this decision formalizes that. Our federation and our labour movement are stronger as a result.”