Home » Sports » At the Downs, Kirt Contois Has Done It All

At the Downs, Kirt Contois Has Done It All 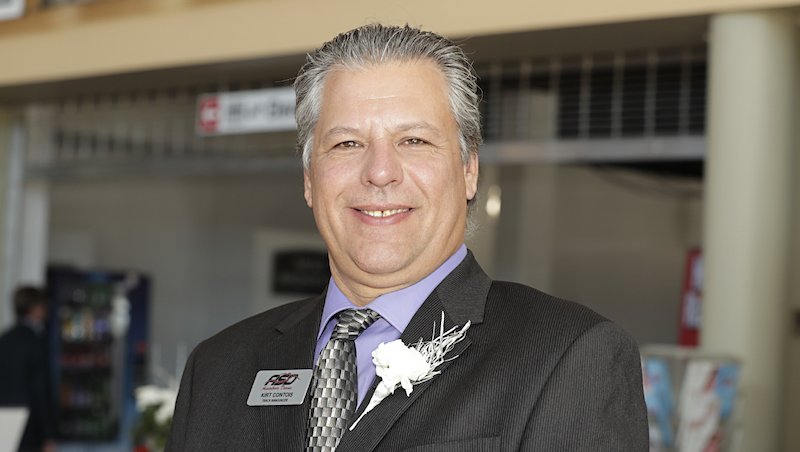 Contois makes no bones about the fact he was getting excited to call the races starting on May 17, but definitely understood why CEO Darren Dunn and his board decided to delay the season opener for one week. After all, he does work in the race office.

“We knew that because of the travel situation, our first card would not have been as strong as we’d hoped,” he said. “But with the extra week, we’ll have full fields. Our first card on the 24th will be extremely strong. We’ll have at least seven-horse fields in every race. The delay was clearly the best decision.”

It is unlikely anyone has done as many different jobs and had more diverse responsibilities at the track than 53-year-old Winnipegger Kirt Contois. And in the fall, he’ll even play a major role in a new book, “Excellence: The Untold Stories of Manitoba’s Indigenous Sport” produced by the Manitoba Aboriginal Sport and Recreation Council. The book was inspired by the Truth and Reconciliation Commission’s recommendation No. 87 and funded in part by Sport Canada.

Contois is a proud Metis Nation man who continues to build thoroughbred racing in the province. He also knows as much or more about the horses in Manitoba than any other human.

Kirt Contois is not only the voice of Assiniboia Downs, he’s the face of the race track as well. Between his race calls – a job he’s been doing for 11 years – and his TV Show, you’d think he had enough to do, but that’s not the case. He’s also the Downs’ assistant race secretary and up until 2018, had been a jockey agent, as well.

Fact is, there aren’t many jobs Contois hasn’t done at the Downs.

One of the most diverse business operations in all of Manitoba, Assiniboia Downs hired Contois, not because of his heritage, but because of his skills. And that’s why his position, as the face of this province’s internationally-viewed race track, is based on merit, not on ethnicity.

“I first went to the Downs with my buddy when I was 15,” Contois recalled. “And I’d just sit in the car. He was a parker, a guy who moved pylons for VIP parking. After he finished work, we’d go in and place a few bets and I got to know people around the track.

“Then I was 17, turning 18, just finishing up at John Taylor Collegiate, when (now CEO of Assiniboia Downs) Darren Dunn asked me if I’d like a job. It was actually Darren’s job at the time and he was looking for a replacement. The job was photo runner and placing judge – that’s making sure the numbers were right on the simulcast when the horses were running. And I would have to take the race photos and put them on the first, second and third floors after they were developed.

Today, he’s as well-coiffed as any network TV star, although he remembers that at the time, he had to remove more than a foot and a half of hair, just so he could start working at the track. Over the years, he’s learned that his public persona starts, but doesn’t end, with his appearance.

“I understand the significance of having an Aboriginal face as the face of the Downs and it’s kind of neat,” he said. “Especially in these times, when the direction tracks have been going is to a really good-looking girl or even two on camera. For most bettors, eye candy is good, but ultimately the question is, ‘Are you helping me pick winners?’ That’s what they really care about. If you can’t pick winners, you can’t do this job.”

It would appear he loved all of his jobs. In the past 36 years – he took one year off to work at the Manitoba Liquor Commission – he has, essentially, done nothing else but work at ASD his entire adult life. In those 36 years he’s been:

As the voice of the Downs, Contois has not lost sight of his heritage. However, he also understands the responsibility he now holds. Horse owners cherish the quality of a good race announcer, especially when their horse wins. So, Contois, who has three kids with his wife Dawn, has gained the respect of everyone at the track.

However, it’s interesting to note that when he was a kid, Contois always thought he’d grow up to be a baseball player.

“I grew up in West Kildonan and my dad worked plenty of overtime with the department of highways so we could move to St. James,” Contois recalled. “My dad was from Gypsumville and my mom, who is Metis too, came from St. Rita. They wanted my sister, Paula, and I to have a better life away from the tougher side of town.

“Growing up, I played some hockey, but baseball was my game. In my career, from pee-wee to the junior St. James A’s, I threw 20 no-hitters and five perfect games. I always thought I’d probably be a ballplayer, but now, I have a job I just love. I’m glad I said yes to Darren 36 years ago.”

← Previous: Twitter Leading the Sports Conversation During NHL Playoffs Next: Home is Where You Need To Be →
Tags: Assiniboia Downs | Winnipeg