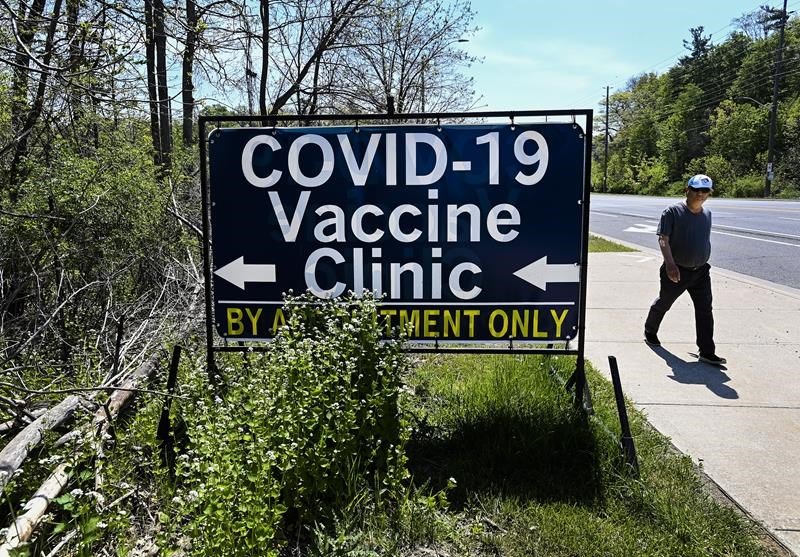 A man makes his way past signage to a mass COVID-19 vaccination centre at the University of Toronto’s Mississauga campus during the COVID-19 pandemic in Mississauga, Ont., on Monday, May 17, 2021. (THE CANADIAN PRESS/Nathan Denette)

OTTAWA — Chief Public Health Officer Dr. Theresa Tam says she expects Canadians who got Oxford-AstraZeneca in the first round of vaccinations will be able to choose which vaccine they get for their second dose.

Tam’s comments Tuesday come hours after a small Spanish study on mixing and matching vaccines reported that giving a Pfizer-BioNTech for the second dose after AstraZeneca is safe and produced a stronger immune response than a second dose of AstraZeneca.

The National Advisory Committee on Immunization is still awaiting further data from another mixing and matching study underway in the United Kingdom, but Tam said advice on second doses should be ready before most people are due to get their second vaccination.

“It is likely that people in Canada who’ve received one dose of AstraZeneca will have a choice for their second dose,” she said at a news conference from Ottawa.

Also on Tuesday, Canada reached the grim milestone of 25,000 total deaths from COVID-19 since the first fatality was reported on March 9, 2020.

The country surpassed 20,000 deaths at the end of January.

Tam said she is feeling positive about Canada being able to fully emerge from the third wave of COVID-19 and prevent a fourth wave, with more than half of eligible Canadian adults now vaccinated with one dose, and declining overall case counts.

With the exception of some hot spots in Manitoba and parts of Alberta, case counts are largely falling. Tam said nationally the number of active cases are down 25 per cent from the second wave of peak of nearly 90,000 in mid-April.

The average daily new case count fell from 7,275 on May 11 to 5,600 Tuesday, said Tam, although hospitalizations and intensive care admissions remain stubbornly above a comfortable level.

More than six people in 10,000 have died of COVID-19 in Canada, and the toll has been heaviest on seniors. More than eight in 10 people who died were over the age of 70, and almost three in five were residents of long-term care homes.

Quebec, reporting 549 new cases, is among the first provinces really looking ahead to lifting public health restrictions. Premier Francois Legault is set to announce how the province’s reopening will work later this afternoon.

Tam said the number one influence on ending the third wave and preventing a fourth is still how well public health measures are planned and implemented.

She has said if 75 per cent of eligible Canadians get one dose, and 20 per cent get two, that should be a place where summer plans for outdoor socializing and activities can resume.

Currently Canadians over 12 are eligible for vaccinations, with those between 12 and 18 only eligible for Pfizer.

Only 4.5 per cent of eligible Canadians have received the second dose so far and most provinces are still giving more than nine in 10 new doses to first-time recipients.

Many provinces delayed second doses up to 16 weeks, instead of the company-suggested three and four week intervals. But with more supplies flowing, that delay is going to be reduced.

For the 2.1 million Canadians who got AstraZeneca in the first round, it’s still unknown what they will get as their second dose.

The Combivacs study run by the Carlos III Health Institute in Spain said fewer than two per cent of more than 450 people who got the AstraZeneca-Pfizer combination reported severe side-effects including headaches and muscle pain, leading the study authors to conclude mixing the doses was safe.

People who got the second dose of Pfizer also appeared to have twice the immune response as those whose second dose was also AstraZeneca.

Tam said that study is being analyzed closely, and another similar study from the United Kingdom is expected to report efficacy data in the next few weeks.

Most provinces have temporarily halted using AstraZeneca for any more first doses with supplies of it currently limited and as further data emerges on the risk of vaccine-induced blood clots in patients who got that vaccine.