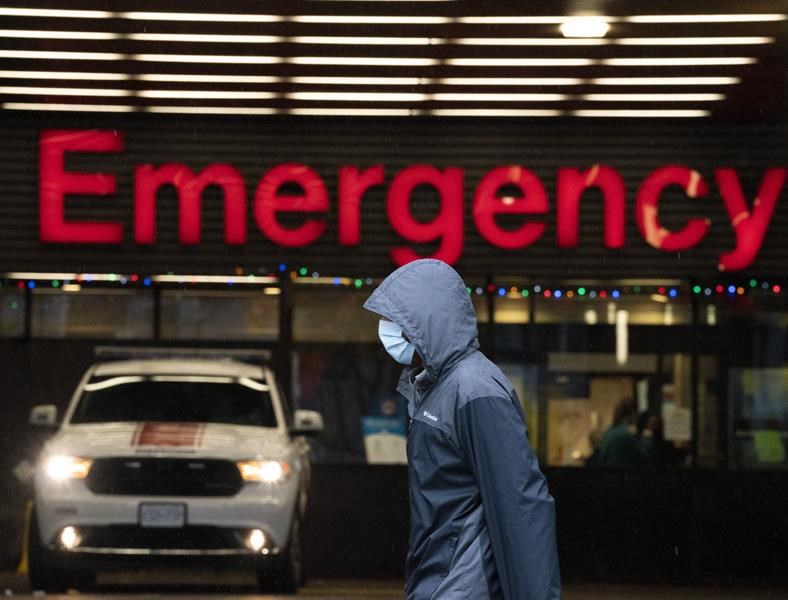 A person wears a protective face mask to help prevent the spread of Covid-19 as they walk past the emergency department of the Vancouver General Hospital in Vancouver Wednesday, November 18, 2020. (THE CANADIAN PRESS/Jonathan Hayward)

WINNIPEG — Manitoba has a record number of people in intensive care and has transferred two COVID-19 patients to northwestern Ontario to free up bed space.

The virus-infected patients were in intensive care but listed as stable when they were sent Tuesday to Thunder Bay some 600 kilometres away. The government would not rule out more transfers in the coming days as the province faces a third wave of the pandemic.

“The compounding effect of multiple days of admissions well over the norm and far beyond what we experienced during wave two has placed extreme strain on our staffing resources,” Shared Health, the body that co-ordinates clinical care in Manitoba, said in a written statement Wednesday.

“Yesterday, this combination of continued high admissions, no ICU patients that were sufficiently recovered for a move to a medicine ward, and an increase in the number of very sick patients in our medical wards at risk of needing to be transferred into ICU placed our critical-care capacity at significant risk.”

Health officials had warned in recent days that intensive care bed space was being stressed and that the province was fast approaching the peak of the second wave, when 129 beds were occupied. Before the pandemic, capacity was 72.

On Wednesday morning, the number of people in intensive care reached 131.

The NDP Opposition said the transfers put sick patients at risk and are proof that the Progressive Conservative government failed to prepare.

“This cabinet stood pat, on their hands, as this premier refused to take action to expand ICU capacity through the first wave, the second wave, and now the third wave,” NDP Leader Wab Kinew said in the legislature.

Health and Seniors Care Minister Heather Stefanson said the transfers were clinical decisions and were a temporary necessity to open beds. She was unable to say how many more patients might have to be taken to Ontario.

“It depends, frankly, on whether or not we continue to see the numbers we’ve seen in the last few days.”

The province is putting more staff in place to add more intensive care beds, she added.

Health officials have said Manitoba has the capacity to ramp up to 173 intensive care beds. But Lanette Siragusa, chief nursing officer, testified in a recent court case that staffing is a limiting factor and the province was hard-pressed to handle the peak during the second wave last December.

Manitoba has had the highest per-capita rate of new COVID-19 infections in the country in recent days. Health officials reported 402 more cases Wednesday and four deaths. The percentage of people testing positive, averaged over the previous five days, stood at 13.5 per cent provincially and 15.1 per cent in Winnipeg.