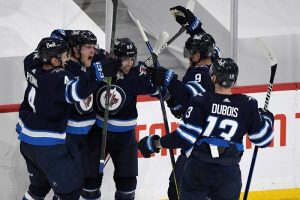 Winnipeg Jets’ Nikolaj Ehlers (27) celebrates his goal with teammates during second-period NHL Stanley Cup playoff action against the Edmonton Oilers, in Winnipeg on Sunday, May 23, 2021. (THE CANADIAN PRESS/Fred Greenslade)

Apparently nobody told Nikolaj Ehlers that.

Playing his first game since April 24, Ehlers scored his second goal of the game in overtime and the Jets stormed back with three unanswered goals in the third period to beat the Edmonton Oilers 5-4 on Sunday, taking a 3-0 lead in the best-of-seven opening-round playoff series.

“You always dream of scoring these kind of goals,” Ehlers said. “But, for me tonight, it was a matter of getting out there, play simple and use my speed as much as possible. But, this was a team effort.”

The Jets can win the series with a victory on Monday.

Mathieu Perreault, Blake Wheeler and Josh Morrissey scored three Winnipeg goals in a crazy three minutes and three second stretch of the third to send the game into overtime.

Then, to cap a remarkable comeback game, Ehlers, who’d missed the final 11 games of the regular season with an upper-body injury, scored off an offensive zone face-off at 9:13 of the extra period to give the Jets a stranglehold of the series.

“We don’t give up,” Ehlers said. “That’s what’s so fun playing on this team. After the OT winner, you could see the joy and it’s a wonder no one got injured at the end there during the celebration.”

“I don’t take for granted how great of a player he is and what he means to our team. But, it is very difficult to do what he did tonight, to miss the amount of time he did, and to come into a game of that magnitude and have that speed and not just get by, make a huge impact,” Wheeler said.

“We were counting down the days to get him back. . . . he just means so much to our team. He’s the type of guy that can flip a game on its head and can make a huge play for you when you need it. And lo and behold, he’s the guy tonight.”

Jets coach Paul Maurice was thrilled to have Ehlers back.

“Two huge goals for sure, but also kind of that positivity that he brings, that energy,” Maurice said. “He’s been off an awfully long time and then to step into playoff hockey is so difficult to do.”

Leon Draisaitl had two goals and an assist for the Oilers, who also got a goal apiece from Zack Kassian and Jujhar Khaira. Connor McDavid had a pair of assists.

Connor Hellebuyck made 44 saves for the Jets while Mike Smith stopped 32-of-37 shots in defeat.

The Jets became the 10th team in NHL history to win a playoff game after erasing a three-goal deficit in the final 10 minutes of regulation.

Maurice called the comeback the biggest in his career behind the bench.

The only thing missing? Fans. Because of COVID-19 protocols in Manitoba, the game was held in in front of no fans at Bell MTS Place.

“It was just too damn bad our fans weren’t in the building because that would have been something,” Wheeler said.

“The roof would come off this building, it would have been absolutely insane,” Perreault added.

The third-period turning point came after Josh Archibald headed to the penalty box for clipping Logan Stanley, a play that has warranted a hearing with the NHL’s department of player safety on Monday.

“I think this is the best way to make (Archibald) pay for what he did,” Perreault said of Winnipeg’s response. “I don’t think it’s a very good play on his part, and we’re pissed about it and we go out and score a goal.”

Indeed, Perreault breathed life into the Jets, scoring with a slap shot on the ensuing power play at 11:41 of the third. That goal sparked a wild stretch of three unanswered Jets goals. Winnipeg’s captain Wheeler sliced the difference to just a goal at 14:28, then just 16 seconds later, Morrissey scored from deep, and it was a tie game.

“All of a sudden it’s just a snowball and you get this excitement going on the bench, guys are going crazy,” Perreault said.

The Oilers jumped out to their most aggressive start of the series, and were rewarded when Draisaitl put Edmonton on the scoreboard at 6:33 of the first period, pulling the puck back and wrapping it around the post past a sprawled Jets netminder Hellebuyck.

Draisaitl doubled the Oilers’ lead at 9:10 of the first on a two-man advantage, lurking outside a scramble inside of the net, then slotting it home – the third multi-goal playoff career game for the 29-year-old.

The offensive outburst from Draisaitl and McDavid felt like a long time coming for nervous Oilers fans. McDavid led the NHL in scoring with 105 points while Draisaitl was second with 84, yet both had been held off the scoresheet through the first two games.

Ehlers got Winnipeg on the board when he scored on a power play at 17:13 of the second, launching a wrist shot into the far corner past Smith.

But barely a minute after Ehlers’ goal, Kassian restored Edmonton’s two-goal advantage. Kassian finished off a three-on-two with Draisaitl and McDavid, connecting on a beautiful pass from Draisaitl to snap a wrist shot past Hellebuyck.

Edmonton padded its lead at 4:43 of the third when Khaira, with his back to the net, perfectly deflected in a shot by Adam Larsson.

From that point on, it was all Winnipeg.

“It’s disappointing because we haven’t been that team all year,” said Oilers coach Dave Tippett. “We’ve been a pretty good team at closing things out.”

Winnipeg won Games 1 and 2 in Edmonton, taking the opener on Wednesday 4-1, then following it up with a 1-0 victory in overtime on Friday.

Game 4 is Monday in Winnipeg. The series heads back to Edmonton for Game 5 on Wednesday, if necessary.