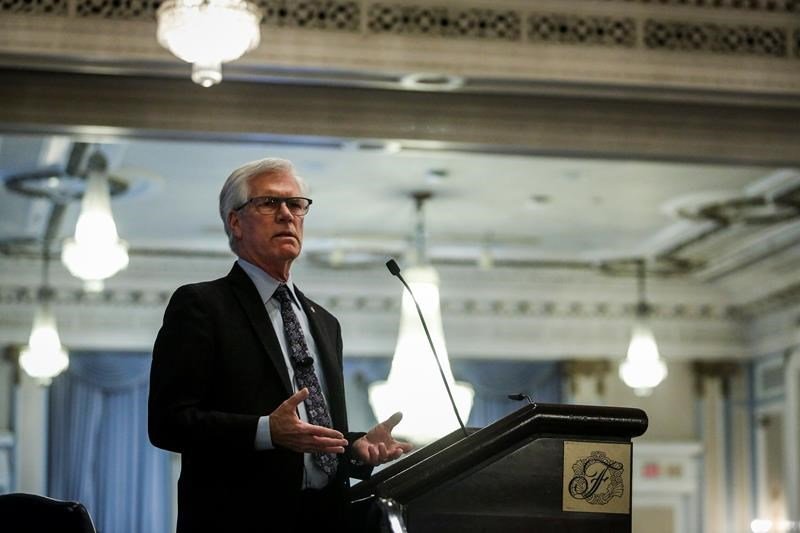 Jim Carr, Prime Minister Justin Trudeau’s special representative for the Prairies, speaks to the Calgary Chamber of Commerce in Calgary on January 14, 2020. (THE CANADIAN PRESS/Jeff McIntosh)

OTTAWA — The premier of Manitoba says his province’s status as the COVID-19 hot spot of North America can be blamed in part on people not getting vaccinated and not getting tested when they’re sick.

Brian Pallister is the latest premier to turn to Ottawa for help as his province’s health care system buckles under the weight of the pandemic’s third wave.

More than 1,200 cases of COVID-19 were confirmed in Manitoba over the long weekend, giving the province the unwelcome distinction of having the highest new infection rate in North America.

The province has now had to fly at least 18 critically ill patients to hospitals in Ontario for care, some as far away as Ottawa, London and Windsor.

“We’re at a critical point in this third wave,” Pallister said at a news conference Tuesday in Winnipeg.

Political opponents and some doctors in Manitoba are criticizing Pallister for not imposing public health restrictions sooner in the third wave, but he said these orders are only effective if people follow them.

He said 43 per cent of the people in Manitoba hospitals right now did not get tested before they were admitted, and 70 per cent of them haven’t been vaccinated even though all Manitobans over 12 are now eligible to get one.

“There’s lots of blame to go around but when people don’t go and get tested when they have COVID, who else am I supposed to talk about?” he asked. “When people go in and don’t co-operate with a contact tracer, and provide information on who they’ve been in contact with, how the hell are we supposed to stop people from getting COVID?”

Manitoba’s surge, which is now accompanied by an extension of lockdown restrictions for at least another week, comes as much of Canada is loosening restrictions as the third wave nationally is well past the peak.

Dr. Theresa Tam, Canada’s chief public health officer, said Tuesday the average number of new cases in the last week is about 5,000 per day, down 40 per cent from the peak in mid-April.

Those declines are being driven by plummeting case numbers in Quebec, Ontario, and British Columbia.

Quebec recorded its lowest number of new cases Tuesday since September, confirming 346 new COVID-19 cases. Quebec is lifting all curfews in the province on Friday, and Premier Francois Legault said he anticipates the 10 remaining regions still in a code-red health order will be moved to orange by June 7.

Ontario reported 1,039 cases Tuesday, its lowest daily report since early March. The province loosened some restrictions over the weekend, opening outdoor sports facilities like golf, tennis and skate parks, and allowing people to gather with up to five people outdoors.

Ontario and Quebec have both released staged reopening plans based on dropping case numbers and increased vaccinations.

Dr. Bonnie Henry, the B.C. provincial health officer, unveiled a four-stage reopening plan Tuesday that began immediately, including allowing people to socialize with up to 10 people outdoors and up to five people from one other household indoors.

By Canada Day masks will only be recommended, and by Labour Day they will be left to personal choice.

“We are in a different place today than we were six weeks ago,” said Henry.

But she said the reopening, which will allow indoor sports without spectators in mid-June, and lift most restrictions by September, will “be flexible” based on what is happening on the ground.

“We know this virus has some tricks up its sleeve still,” she said.

Those tricks can include the variants, one of which is believed to be behind a cluster of new cases in central Newfoundland. Officials are investigating if the B. 1.617.2 variant first detected in India is the culprit in 44 confirmed and presumed cases, including 11 new ones on Tuesday.

Some new restrictions are being imposed in the region including school closures for a couple of days, no in-person dining and no gyms, bingo halls or bars operating.

In Manitoba reopening is still not on the table, one of the few provinces where restrictions are being extended. Chief medical health officer Dr. Brent Roussin said the ban on social gatherings in place for the long weekend will be extended at least until next weekend now.

Pallister said he informally requested assistance from Prime Minister Justin Trudeau when the two spoke by phone last week, and a formal request has now been submitted to the Department of Public Safety.

Trudeau said Tuesday Ottawa will send federal workers and is also talking to the Canadian Red Cross about more help from them. The military is already in Manitoba helping with vaccinations in 23 First Nations, but is working with Manitoba to assess additional needs, a military spokesman said.

Federal officials were not quick to explain details of how many and what type of workers are specifically is being offered. Pallister said he thinks a dozen critical care nurses are being deployed first, with the potential for up to 50.

He said Winnipeg hospitals have space to handle more ICU patients, but doesn’t have the staff, so federal workers are needed.

Ottawa helped Ontario with some health workers this spring as its hospitals hit new record patient levels, and helped co-ordinate and fund the deployment of teams of doctors and nurses from Newfoundland and Labrador to fly to help hospitals in the Greater Toronto Area.

All but three provinces have now extended vaccine eligibility to everyone at least 12 years old, and will likely have more vaccine options for that age group soon.

Moderna said Tuesday results from its clinical trial in kids between 12 and 17 show none of the kids who got two doses of its vaccine developed COVID-19. It intends to apply to Health Canada and other regulators for approval in early June.

Currently, Pfizer-BioNTech is the only vaccine authorized for anyone under 18. Both Pfizer and Moderna are testing their vaccine on children as young as six months now, and hope to apply for approval for kids under 12 by the fall.

Moderna however has still not confirmed any further deliveries to Canada. Procurement Minister Anita Anand said she spoke to the company’s officials Tuesday morning and has been assured “millions of doses” will be delivered starting in early June, but there are no details on exactly how many or when.