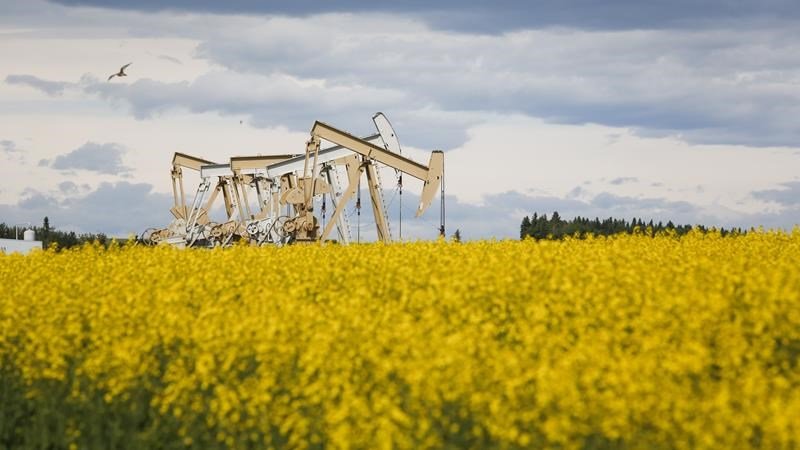 Pumpjacks draw oil out of the ground in a canola field near Olds, Alta., Thursday, July 16, 2020. (THE CANADIAN PRESS/Jeff McIntosh)

OTTAWA — The expected uptake of electric vehicles and stricter measures worldwide to reduce greenhouse gas emissions are the top reasons why a climate-focused research group is calling on governments not to invest any more money in Alberta’s oil sector.

The International Institute for Sustainable Development has released a new study outlining how long-term demand for oil will be driven down by global targets to cut carbon-related pollution and the shift toward putting more vehicles on the road powered by batteries and alternative fuels.

Consequently, it recommends government spending not be directed at the production of combustible hydrocarbons and urges policy-makers to focus instead on Alberta’s economic transition and diversification.

“It is important that governments, communities, the private sector, unions and non-governmental organizations accelerate these initiatives now.”

But Alberta’s energy minister said that oil and gas will continue to dominate the supply mix for the next several decades.

“We also firmly believe that the strength of our traditional oil and gas sector will allow us opportunities to be leaders in innovation and a diversified energy future,” Sonya Savage said in a statement Wednesday.

“That’s why our government has taken decisive action to capitalize on these opportunities, including establishing a value-added natural gas strategy – which outlines goals to become a leading supplier of hydrogen – as well as passing legislation for a geothermal development policy.”

Savage said while Alberta’s United Conservative government recognizes the demand for electric vehicles is growing, they still represent a small percentage of the global car stock.

“While it’s possible that the accelerated adoption of electric vehicles may have some impact on Alberta’s long-term energy supply and demand, the transition will likely happen over a much longer period of time.”

The Paris-based International Energy Agency also recently released a report on how the world’s energy sector can achieve net-zero emissions by 2050.

Canada, along with all other G7 countries, have pledged to reach net-zero emissions no later than 2050.

The agency’s report says to do that on a global scale for the energy sector, no new oil and gas developments should be approved beyond what’s already been planned, and coal mining shouldn’t be expanded.

Following a virtual meeting with his G7 counterparts, Canada’s environment minister wouldn’t commit to that, saying in part that the country is coming up with its own plan on how to reach its 2050 goal.

“I do think it would be a little bit premature for us to foreclose anything,” Jonathan Wilkinson said last Friday.

“Gas, in particular, one can see a pathway, where you essentially capture hydrogen from gas and capture all the CO2 and sequester it and you can do that in a way that’s not carbon polluting.”

The federal Liberal government has assembled an advisory body to provide insight on how to reach net-zero emissions. It has also promised to slash its greenhouse gas pollution output by up to 45 per cent below 2005 levels by 2030.

The government says current federal and provincial initiatives get it up to 36 per cent.

When it comes to the demand for oil, Wilkinson said because it’s mainly used as a transportation fuel, ambitious sales targets for electric vehicles in different jurisdictions will no doubt have an impact.

By 2040, Canada has a goal that zero-emission vehicles make up all sales of light-duty vehicles.

“That obviously has implications for the production of oil, if in fact demand for that oil is being reduced significantly,” Wilkinson said.