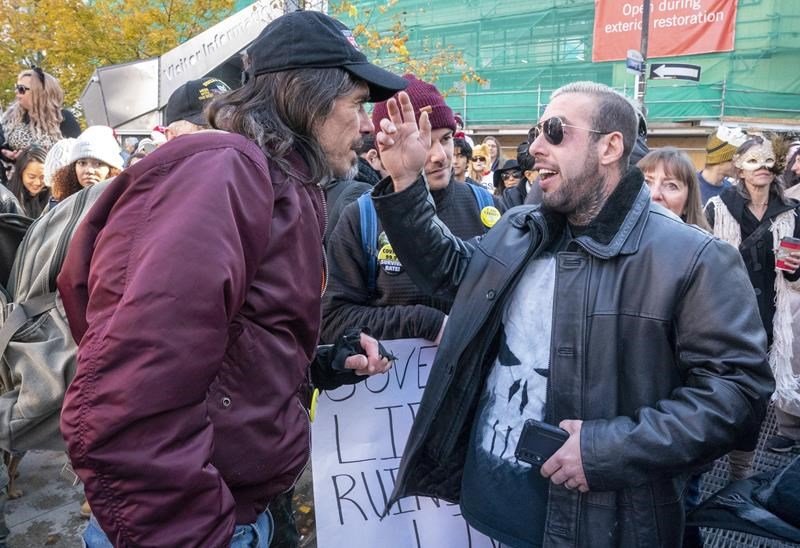 WINNIPEG — The Manitoba government and Winnipeg police obtained arrest warrants Friday ahead of a planned protest against COVID-19 restrictions as case counts continued to strain hospitals.

The Winnipeg Police Service said a warrant had been issued for Chris Saccoccia, an Ontario man who has been travelling across Canada to speak at rallies against public health orders.

Saccoccia, who also uses the name Chris Sky, was recently charged in Toronto with threatening to shoot a member of the public as well as elected officials.

Winnipeg police said they also arrested one other individual for repeated violations of health orders and had five warrants waiting to be executed.

“The warrants … are stand-alone in relation to previous events,” Insp. Nick Paulet said. “This has been something that has been ongoing for a lengthy period of time and a lengthy series of investigations.”

A news release from the provincial government said the warrants were issued “to prevent further offences related to attending, participating and organizing public gatherings throughout the province in violation of public health orders.”

Saccoccia said in a livestream video that he was cancelling plans to speak at the protest and would avoid Manitoba so that he could remain free to go to a rally in Calgary on the weekend.

Police would not name the subjects of the other arrest warrants.

Tobias Tissen, pastor at a small church southeast of Winnipeg, has openly defied public health orders and spoken at anti-restriction protests. He posted on social media that he was told an arrest warrant had been issued for him.

Health officials announced one of the biggest one-day jumps in COVID-19 numbers since the pandemic began. There were 497 new cases and no deaths. Four earlier cases were removed due to data correction for a net increase of 493.

Hospital intensive care units continued to be pushed near the limit. More than two dozen patients have been sent to other provinces to free up beds.

Under current public health orders, public gatherings are not permitted, indoors or out.

The province is also dealing with a delay in supplies of the Moderna vaccine. The holdup will push back Manitoba’s goal to have 70 per cent of people 12 and older vaccinated to the end of June. The original target was June 9.

Premier Brian Pallister said he is still aiming to have provinces get vaccines directly from states south of the border.

The U.S., which has a surplus of vaccines in many areas, has sent doses to Canada on a country-to-country basis. The idea of direct state-to-province shipments was first raised earlier this month by premiers and governors in Atlantic Canada, Quebec and the U.S.

Pallister is planning to announce incentives next week to encourage more Manitobans to get vaccinated.

The province has floated several possibilities in an online survey, including grocery vouchers, free admission to sporting events and financial incentives of up to $100.

“We need to encourage those that are kind of sitting on the fence, saying, ‘I want to wait a few months just to be sure,’ to step forward and get that vaccine as soon as possible,” the premier said in an interview.

“This idea about herd immunity (is) very, very hard to achieve when we don’t have hundreds of thousands of people vaccinated at all.”