Home » The Canadian Press » ‘It Was Devastating,’ Chief Recalls After Remains of 215 Children Found in B.C.

‘It Was Devastating,’ Chief Recalls After Remains of 215 Children Found in B.C. 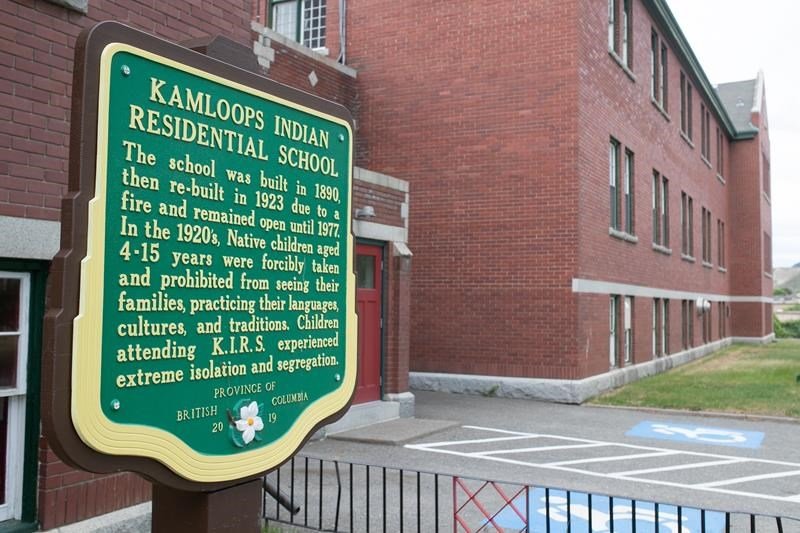 A plaque is seen outside of the former Kamloops Indian Residential School on Tk’emlups te Secwépemc First Nation in Kamloops, B.C. on Thursday, May 27, 2021. (THE CANADIAN PRESS/Andrew Snucins)

KAMLOOPS, B.C. — Hundreds of pegs, each marking the possible site of a child’s remains, were staked out on the grounds of a former residential school in Kamloops B.C., when Tk’emlúps te Secwépemc Chief Rosanne Casimir arrived at the site last weekend.

The First Nation used ground penetrating radar over the long weekend in an effort to determine the fate of children who went missing from the school.

“It was shared with me that it was children from our community … it was devastating and quite mind boggling,” Casimir said on Friday.

The survey work has uncovered the remains of 215 children on the grounds of the former Kamloops Indian Residential School.

The band has begun reaching out to other First Nations across Western Canada that might have had children sent to the school who never returned home.

Casimir said what the nation called “the knowing” about the missing children fuelled the search.

Her mother and grandmother shared stories of abuse at the school and Casimir said the community has pushed for answers on what happened to the students.

“It’s a harsh reality and it’s our truths. It’s our history and it’s something we’ve always had to fight to prove.”

The results are preliminary with a final report expected at the end of June, but more remains could be discovered, she added.

The BC Coroners Service has been notified and more work will be carried out on the site.

One residential school survivor has had flashbacks about his time at the institution since the discovery.

Upper Nicola Band Chief Harvey McLeod attended the school from 1966 to 1968. He recalls speaking with his friends about children who were just gone one day.

“We talked among ourselves, the boys and I, my friends and I, we talked about it saying they probably ran away and we were happy that they probably got home.”

McLeod said the discovery of the remains brought back memories of his time at the school.

“I was shattered. It just broke me when I heard about it,” he said in an interview. “It’s a secret, or it’s something we knew that may have happened there, but we had no evidence.”

The school operated between 1890 and 1969. The federal government took over the facility’s operation from the Catholic Church and ran it as a day school until it closed in 1978.

The National Truth and Reconciliation Commission has records of at least 51 children dying at the school between 1914 and 1963.

The commission noted in its 2015 report that officials in 1918 believed children at the school were not being adequately fed, leading to malnutrition.

The Crown-Indigenous relations’ ministers said in a statement that the discovery is a reminder of the harms families and survivors continue to suffer.

“We are profoundly saddened by this discovery and our thoughts are with Tk’emlúps te Secwépemc First Nation, as well as with all Indigenous communities across Canada,” said Minister of Crown-Indigenous Relations Carolyn Bennett and Minister of Indigenous Services Marc Miller.

“It is said that once you know the truth, you cannot un-know it. Yesterday’s discovery reflects a dark and painful chapter in our country’s history.”

They are working with the community and partners such as the BC First Nations Health Authority, to provide resources and the support needed as determined by the community, the ministers said.

Manny Jules, who was chief of the Tk’emlúps for 16 years, said he wants an apology from the Catholic Church for its role in operating residential schools across the country.

Bishop Joseph Nguyen expressed his “deepest sympathy” on behalf of the Roman Catholic Diocese of Kamloops to Casimir and the Tk’emlúps te Secwépemc First Nation.

“No words of sorrow could adequately describe this horrific discovery,” he said in a statement.

British Columbia Premier John Horgan said he was “horrified and heartbroken” when he learned of the burial site.

The discovery is a tragedy of “unimaginable proportions” and highlights the violence and consequences of the residential school system, Horgan said in a statement on Friday.

The head of the First Nations Health Authority said it will provide mental health and trauma support to community members as the search continues.

Richard Jock, the authority’s CEO, said the legacy of colonialism leads to modern-day trauma and health issues in Indigenous communities.

“This particular event may be seen as historical but it’s also a continuous trend, I would say, of this power imbalance, if you would, that creates these issues for First Nations people.”

Grand Chief Stewart Phillip of the Union of B.C. Indian Chiefs said what has been found “is the reality of the genocide that was, and is, inflicted upon us as Indigenous Peoples by the colonial state.”

“There are no words to express the deep mourning that we feel as First Nations people, and as survivors, when we hear an announcement like this,” he said in a statement. “These were children — all belonging to a family and community, and a nation — who were forcibly stolen from their homes under the authority of the Canadian government, and never returned.”

Chief Don Tom, the union’s vice-president, noted the first-ever meeting of the Union of B.C. Indian Chiefs was held on the former grounds of the Kamloops residential school in 1969.

— By Nick Wells in Vancouver.