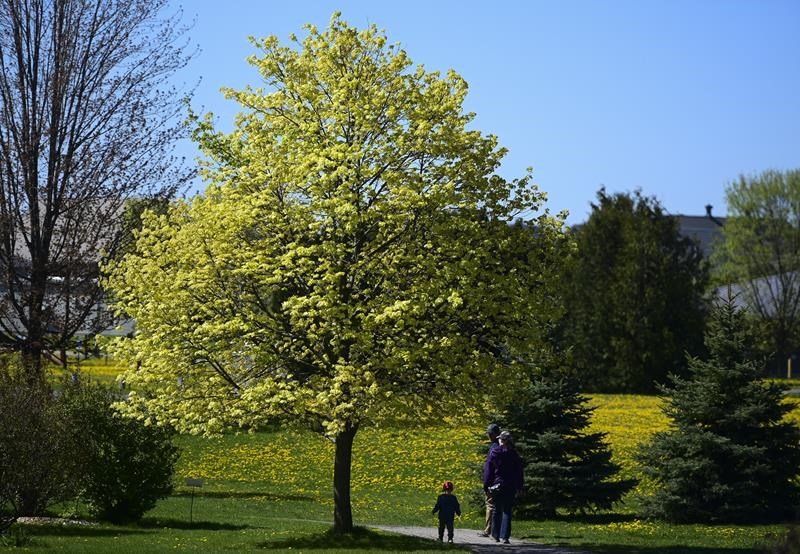 Colourful spring flowers and trees bloom as people visit the arboretum in Ottawa on Wednesday, May 12, 2021. (THE CANADIAN PRESS/Sean Kilpatrick)

Experts say higher than normal pollen levels have led to a sneezier allergy season in parts of Canada this year.

They point to an earlier blossom and warmer May, which led to an explosion of pollen in southern Ontario and Quebec.

A thin coat of yellow dust has blanketed much of Toronto, Ottawa and Montreal.

Chris Scott, chief meteorologist at the Weather Network, says he can’t recall ever before seeing pollen accumulate on his car the way it has this year.

He says the weather has had something to do with the amount of pollen out there.

Temperatures remained cool throughout much of April before quickly warming up in May, and Scott says it was like “the switch flipped.”

“It’s probably one of the quickest I’ve seen vegetation just go from buds on a tree to full leaf, where within about 10 days, all of that happens,” he said. “That spring greenup happened very quickly…and so it’s producing all of the pollen that we saw this month.”

The contrast is even starker when compared to last year, when pollen levels were at just 6,000 grains per cubic metre, Coates said.

He said other parts of the country — such as the Atlantic provinces — are also seeing higher pollen levels than normal, but not to the same extent as Ontario and Quebec.

In addition to the warmer temperatures, the lack of precipitation has added to the pollen problems in central Canada, he said.

“Rain washes the pollen out of the air,” he said, noting that allergy-sufferers should take advantage of the time right after it rains to get outside without having to worry about runny noses or itchy throats.

“For all the allergy sufferers, the best thing to do is avoid it,” Coates said. “And the best way to avoid it is to know what’s in the air.”

But beyond the weather, Coates said, urban planning also has an effect on allergies.

“Cities like to plant male trees,” he said. “…Female trees make fruits and flowers, and then they fall and make messes. Male trees don’t, but they really affect allergy-sufferers.”

Ultimately, Coates said, it’s normal for pollen levels to fluctuate, and it’s not a sign of the “pollen apocalypse.”