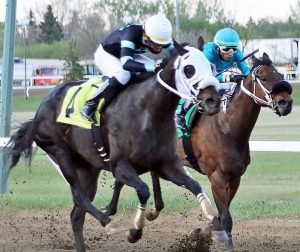 WINNIPEG — Leroy Nelson wasn’t happy. It was 2016 and the then-35-year-old jockey from Jamaica figured he was done. The passion was gone.

So, after riding one horse at Gulfstream that season, he hung up his racing tack. He was happy galloping horses in the morning, but he was just tired of the pressure and the danger and the disappointment of big-time thoroughbred racing.

So, five years ago, Leroy Nelson quit his job as a jockey and never figured he’d go back. But it’s amazing what can happen when you just can’t get something out of your blood.

It took a while but in 2019, Nelson started to get the bug again. For one thing, he was finally healthy. After getting an operation in 2017 for an injured shoulder that had become chronic after a fall from a horse way back in 2003, he finally felt comfortable in the saddle. So, he decided he would take a year or two to get in shape and be ready to race again in 2020. Then COVID-19 arrived and he couldn’t get any mounts, so when things opened up in South Florida this year, he figured he’d get back in the saddle.

“And then my cousin Tyrone (former ASD jockey Tyrone Nelson) called me,” Leroy said enthusiastically. “ He said, ‘If you want a good chance to come back, why not try Canada?’ I can tell you, that wasn’t my plan, but I listened to what he had to say. I told him I’d give it a shot and I got in touch with his agent, Shane Ball. So, I decided I would give Winnipeg a try. That call was one of the best things that ever happened to me.”

Monday night at Assiniboia Downs, now-40-year-old Leroy Nelson announced his presence with authority. He won the opening race of the meet, a $16,000 Maiden Special Weight, aboard Maibella for owners Elton Dickey and Tom Payne and trainer Elton Dickey.

Then in Race 2, the $20,000 the Astral Moon Overnight Stakes, he brought home Manitoba-bred Purrsistent for trainer Devon Gittens and owner-breeder Dr. Betty Hughes.

Then in Race 6, he completed the hat-trick in a $9,400 claimer aboard Warbridge for owner Quinney Racing and six-time champion trainer Tom Gardipy Jr.

It was a tremendous rookie night for a veteran who has spent his life around racetracks and has been a professional jock in North America since 1999. In fact, i was a comeback made for a movie.

“When I was racing in Florida, I just wasn’t able to get enough quality rides,” he said. “But I was able to come up here and Shane (Ball) was able to get me on some good horses. I love it here. I hope I can continue to be successful.”

Nelson grew up at Kingston’s Caymanas Park where his late father was a groom. He dreamed of becoming a jockey, worked hard at his craft and eventually became so successful that in 1999 he decided to move to South Florida and give Calder Race Course (now closed) a try.

“But every morning when I was at the track galloping horses, people would say to me, ‘Leroy you should go back to riding,’ and after a while you start to think that maybe you are good enough,” he said. “Other people believed in me, but I just didn’t believe in myself. But they kept telling me I could do it, so I thought maybe I should try. I just didn’t think I would make my comeback in Canada.”

Nelson finished off his first week in Winnipeg with a Wednesday-night win in a $15,000 Allowance aboard longshot Bad News for owner Arnason Farms and trainer Lise Pruitt. After a full schedule on Monday and Wednesday and only one race on Tuesday due to inclement weather, Leroy Nelson was suddenly the leading jockey at Assiniboia Downs with four wins and a second in 12 starts and earnings of $41,375. He could best his 2015 season in purses this coming week.

“I love it here,” he said, almost in disbelief. “It’s such a different feeling now. Everybody here treats me so well. If I can do good, I plan on making Winnipeg my second home. I’ll live here during the season and then go back to Gulfstream for their season.

“Right now, I just want to continue the momentum. After all those years off, my mom and my brothers are all so happy that I’m riding again. They’re glad I came back.”

He might love his new surroundings, but he does have one small issue with Winnipeg. And it’s a problem that isn’t surprising for a Jamaican rider who lives in South Florida.

“It’s a little cold, especially in the mornings,” he said. “I’ve never worn so many sweaters in my life. I know more about the weather now than I ever have before. I check the weather every half hour. If you want to know anything about the weather, just ask me.”

← Previous: 292 New COVID-19 Cases in Manitoba on Sunday; 7 Deaths Next: Only a Few Members Will Remain in Manitoba Legislature for Rest of Session →
Tags: Assiniboia Downs | Winnipeg