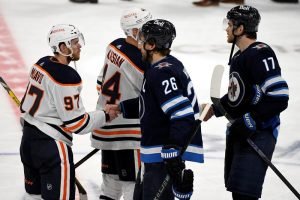 Defenceman Nate Thompson says the Winnipeg Jets are “itching to get going” after more than a week of watching hockey on screens instead of from the bench.

Winnipeg hasn’t played since May 24 when they swept Connor McDavid’s Edmonton Oilers in a first-round matchup. As they waited for the Montreal Canadiens to eventually overcome the Toronto Maple Leafs in a seven-game series, the Jets spent time resting and getting some work in on the ice.

“We haven’t practised, really, this much, since training camp, to be honest. So it’s nice to get some practice in, work on some things, and get a little break,” Thompson said after Tuesday’s on-ice session.

The hockey players are eager to get back to playing, though, he added. The Jets will host the Habs Wednesday to kick off the second-round playoff series.

“You usually don’t want to have too much time off but I thought we’ve done a good job of pushing the pace in practices and making sure that we keep that playoff edge, especially going into this next round,” Thompson said.

Winnipeg’s coaching staff focused on keeping practices short but tough over the undefined break, said coach Paul Maurice, and they’re hoping that serves the team well against a Montreal side running high off an emotional battle.

“They’ve got that advantage … and we’re going to have to do everything we can to take it from them. They have that, they’re so dialed into it,” Maurice said. “The rhythm and routine of playoff hockey, if you get into it, can be a huge advantage. So I think they do have that early in this game tomorrow, and we’re going to have to steal it from them.”

It’s difficult to judge what impact rest — or a lack thereof — will have in the playoffs, said Canadiens coach Dominique Ducharme.

“From our side, we played some games with our backs to the walls and we have kind of a momentum. On the other side, rest is always a good thing,” he said Wednesday as his players took a much-needed day off after downing the Leafs 3-1 the night before.

“So we’ll see. Sometimes it’s hard to be finding that emotion back again after a Game 7 or you carry it on. And sometimes that rest is a positive and other times it’s tougher to get going.”

Winnipeg and Montreal finished the regular season separated by just four points in the standings, with the Jets in third place and the Habs in fourth.

While Winnipeg took the nine-game regular-season series with six wins, three of the victories were decided in overtime, and the Jets’ scoring edge was a slight 31-28.

Thompson spent parts of two seasons playing in Montreal and said he wasn’t surprised that the Canadiens came back from a 3-1 series deficit to defeat the Leafs.

“It’s a resilient team over there,” he said. “Then they’ve got (goalie) Carey Price. They have a lot of guys that work extremely hard. You can see the series shift, I think Game 5, and I just had this feeling that they weren’t out of it.”

Price was key to Montreal’s first-round success, making 218 saves across seven games. He finished the series with a 2.24 goals-against average and a .932 save percentage.

“Carey Price is probably the top goalie of my generation,” said Jets captain Blake Wheeler. “He’s shown the ability to steal big games, steal big moments, had a big part in their last series, too. Nothing but respect for what he’s done.”

Winnipeg has a stellar goaltender of its own, however. Connor Hellebuyck was awarded the Vezina Trophy last year as the NHL’s top netminder, and allowed just eight goals against the Oilers in round one.

Helping Hellebuyck out will be a priority against Montreal, Wheeler said.

“I think the overriding theme is that we’ve just got to be patient, allow our goalie to do his thing and understand that we’re going in against a team that’s going to do the same thing against their goalie,” he said. “We try to let (Hellebuyck) see the puck and feel that if he’s seeing pucks, he’s going to stop them all.”