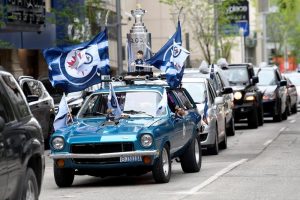 Winnipeg Jets fans drive around the arena prior to the NHL playoff game against the Edmonton Oilers in Winnipeg on May 23, 2021. (THE CANADIAN PRESS/Fred Greenslade)

WINNIPEG — The Winnipeg Jets will be playing in front of live fans this week for the first time in more than a year.

The National Hockey League club announced on social media Tuesday that it will host a small number of health-care workers for the first two games of its playoff series against the Montreal Canadiens, which starts Wednesday.

“The Winnipeg Jets are pleased to confirm Bell MTS Place will host up to 500 fully vaccinated health-care workers for both Games 1 and 2,” reads a message on the club’s Twitter account.

Montreal has allowed some fans to return to the stands after getting permission from the Quebec government.

Premier Brian Pallister said the Manitoba government was also on board with the idea.

“I think we should take that as a sign of some small amount of optimism that we can start to get our lives back here in Manitoba,” he said.

Having fans in the stands on Wednesday will require a quick change to the province’s public health orders, which as of Tuesday evening still didn’t allow live audiences for professional sports.

Manitoba is dealing with a severe third wave of the COVID-19 pandemic, which has led to strict public health orders and has seen some intensive-care patients flown to other provinces.

Social gatherings between people from different households are prohibited with some exceptions for people who live alone.

Restaurants are limited to delivery and takeout, and schools in areas including Winnipeg and Brandon have switched to remote learning.