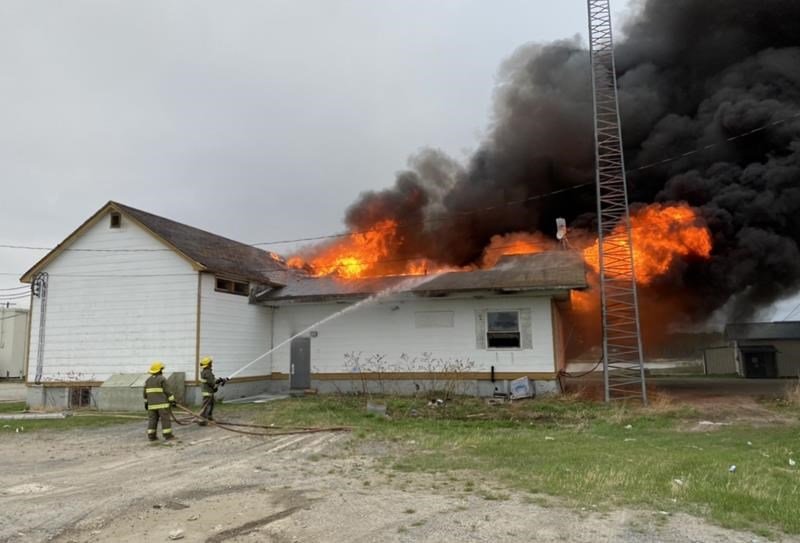 Firefighters battle a building fire, as shown in this handout image provided by the RCMP, that was previously used as a day school for Indigenous children on the Pimicikamak Cree Nation in Manitoba. It burned down on Thursday June 3, 2021 in what RCMP say was a suspected arson. (THE CANADIAN PRESS/HO-RCMP)

CROSS LAKE, Man. — The chief of a Manitoba First Nation says a building that was used as a former day school for Indigenous children has burned down.

“When you are traumatized and you had the experience like the way our people had, the visibility of a structure symbolizes the institutions, the deaths, the murders, the sexual abuse, the abuse,” said Pimicikamak Cree Nation Chief David Monias.

RCMP said on Thursday evening a security guard spotted smoke coming out of the building in the community, also known as Cross Lake, located about 530 kilometres north of Winnipeg.

The blaze was eventually extinguished but there was substantial damage and Monias said the building is a complete loss.

The cause has not been determined but RCMP said arson is suspected.

Monias said the community is hurting after remains were found at a former residential school site in British Columbia. The Tk’emlups te Secwepec First Nation has said ground-penetrating radar detected what are believed to be the remains of 215 Indigenous children at the Kamloops Indian Residential School site.

“It’s like reopening the wound and retraumatizing,” Monias said Friday.

He said the former day school in Pimicikamak had long symbolized the wrongs committed against First Nations people in his community. Everyone in the community called it the IRS building, he said, “meaning the Indian residential school,” even though it was a day school.

Children who went to day schools were largely able to go home to their parents at night. But their purpose was similar to residential schools — assimilate Indigenous people and force them to abandon their language and culture. There have also been widespread reports of physical, verbal and sexual abuse at day schools.

A separate class action lawsuit for day school students was settled in 2019.

Monias, who also attended a day school, said the First Nation had to repurpose some buildings with difficult histories because of a lack of proper infrastructure on the reserve.

In recent years, he said the day school building was used by the community’s health department to provide maternal health programs. He also said it’s where people went to file their residential school and day school claims, and where records were stored.

He said he hopes some of that can be salvaged.

“You cannot totally erase the symbolism of that building, but we were trying to use it to help our people and to use it in a good way,” he said.

Monias is also calling on the federal government for help to investigate the site of a former residential school in the community. Twelve children and a teacher were killed in a fire at the school in 1930. It was rebuilt and closed in 1969.