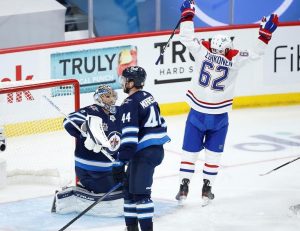 WINNIPEG — Carey Price turned aside 30 shots in a 1-0 victory over the Winnipeg Jets Friday – and then put the spotlight on his Montreal Canadiens teammates.

The veteran netminder continued to be hot in these Stanley Cup playoffs, recording his eighth career playoff shutout that gave Montreal a 2-0 lead in their best-of-seven North Division final.

Tyler Toffoli’s short-handed goal 1:41 into the second period held up as the game-winner.

“We’re playing well on both sides of the puck,” Price said. “We’re just making smart decisions and backing each other up all over the ice.”

Game 3 is Sunday in Montreal, followed by Game 4 the next night. Teams that take a 2-0 lead on the road are 82-20 (80.4 per cent) in winning a best-of-seven playoff series, including 2-0 this season (Winnipeg and Tampa Bay).

“It’s a challenge, for sure,” Jets head coach Paul Maurice said. “We’ve been a better road team than we’ve been a home team all year.

“We’ve got some confidence going into the other team’s building and there’s a chance we might get Paul (Stastny) back, which will probably help our group up front.”

The Jets were without leading scorer and No. 1 centre Mark Scheifele, who was starting a four-game suspension for charging into Canadiens forward Jake Evans in the final minute of Wednesday’s 5-3 Montreal win.

Scheifele sent Evans flying onto the ice after he scored into an empty net. Evans hit his head and was wheeled off the ice on a stretcher but was evaluated and didn’t go to hospital. He’s sidelined indefinitely with a concussion and was replaced by Artturi Lehkonen.

Pierre-Luc Dubois centred Winnipeg’s top line with Kyle Connor on the left and captain Blake Wheeler on the other side.

Stastny missed his second game of the series with an undisclosed injury. Defenceman Jordie Benn took the roster spot of Dylan DeMelo, who Maurice said suffered a soft-tissue injury in Wednesday’s game

Winnipeg outshot the visitors 8-7 in the first period, which didn’t reveal any carryover of anger or big hits from Wednesday’s tilt.

“Obviously, Carey’s doing what he does,” Montreal defenceman Ben Chiarot said. “He’s been outstanding for us and guys are playing hard in front of him.”

The game’s first penalty led to Toffoli’s short-handed marker at 1:41 after Canadiens forward Paul Byron was called for high-sticking 22 seconds into the second period.

“Maybe we’re playing good defensively, so maybe they’re trying to force some plays sometimes and we capitalize on that,” Habs forward Phillip Danault said of his team’s penalty killing. “(Toffoli) with a hell of a shot, a scoring shot.”

Emotions seemed to turn up a notch later in the second, when scrambling players to the side of Hellebuyck starting shoving and pushing each other. The Canadiens led 17-16 in shots on goal after the middle frame.

The Jets turned up the tempo early in the third, but two shots they sent toward Price hit their own players first. Winnipeg then had a power play, but Price stopped Josh Morrissey’s blast from the point.

“Maybe a couple of minutes they controlled it after scoring a big goal, but other than that the play was in their end pretty much the whole third period,” Wheeler said.

Hellebuyck was pulled for the extra attacker with 2:04 remaining, but Montreal’s defence tightened and helped Price out. Toffoli also hit the post of the empty net and Price denied Connor.

“I think we had a lot of great chances,” Winnipeg forward Nikolaj Ehlers said. “So if we can keep doing what we’re doing, it’s going to go in. We’re a confident, confident team.

When the Canadiens return home, they’ll also have fans in the stands. The club was the first NHL team in Canada to have a crowd this year, allowing 2,500 fans to attend Game 6 against the Toronto Maple Leafs after Quebec loosened restrictions.

The Leafs followed up by covering the cost for 550 fully vaccinated health-care workers to attend Game 7 against the Canadiens after Ontario gave the green light, then Manitoba gave the go-ahead for Wednesday’s series opener.