Melisandre: The Next Promising Filly 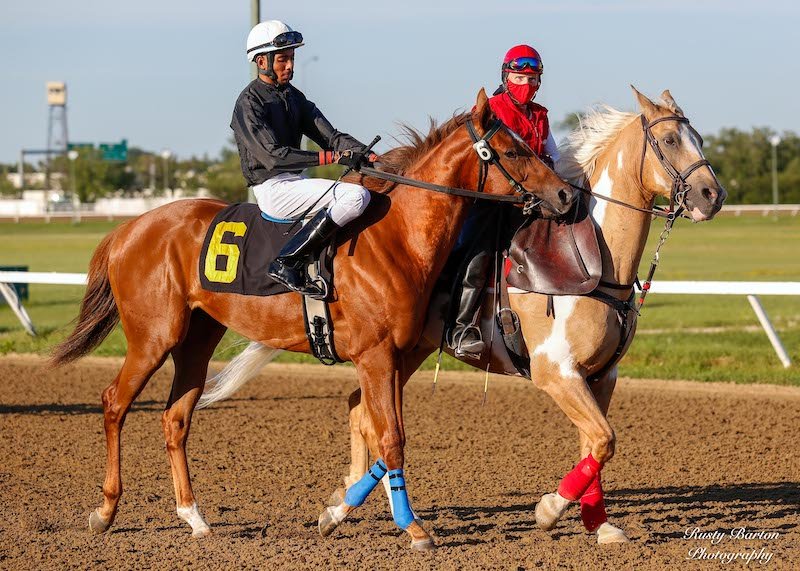 Melisandre (6) is ridden in this undated photo (RUSTY BARTON PHOTOGRAPHY)

WINNIPEG — Barry Arnason isn’t certain that his beautiful little filly is as good as the legendary Escape Clause, but he’s looking forward to having the opportunity to find out.

After all, this magnificent racing thoroughbred out of Russell, Man., has no idea what it’s like to lose.

Melisandre is now a perfect five-for-five and while Arnason is certain what will happen next, he isn’t necessarily that certain what might happen in July and August.

“She’ll race next in the ($35,000) Chantilly Stakes, the three-year-old sprint,” said the 68-year-old Arnason enthusiastically. “Then we’ll probably run her in all the Manitoba Stakes races we can and then go out to Alberta and run that $50,000 CTHS Sales Stakes. At least, that’s the plan right now.

“You know we had that crazy whirlwind tour with Escape Clause a few years and who knows, maybe we’ll end up there with Melisandre someday. You never know.”

Then, on August 4, she won the 31st running of $30,000 Debutante Stakes, beating Shelley Brown’s Fire On Command by a length. On August 25, she won the 32nd running of Manitoba’s $35,000 CTHS Sales Stakes, edging Dr. Betty Hughes’ Call the Cops by a length and a half. On September 15, she finished the season with a win in the $30,200 Buffalo Stakes on the final day of racing, beating Prairie Magic by a length and three-quarters.

In her opener this spring, she beat Henry S. Witt Jr.’s Fox Appeal by a length in her fastest career time over six furlongs to bring her career earnings to $60,419 which is quite impressive for a filly that cost Arnason and True North $18,908 at Manitoba’s Yearling Sale.

“Melisandre was bred by Cam Ziprick of Ziprick Thoroughbreds, Charlie Fouillard and Arnason Farms,” Arnason explained. “Cam was named the consignor and we put her in the Yearling Sale with every intention of selling her as long as we got the reserve price, which was, as I recall, around $20,000.

True North’s chairman is Pat Beavis, the man responsible for naming a beautiful young thoroughbred filly after a Red Priestess from Game of Thrones. For those who don’t know, the fictional Melisandre revived Jon Snow after the Battle of Winterfell, but later united the newly crowned King in the North with Daenerys Targaryen, believing they both had an important part to play in the Great War. If you’re a GOT fan, you know what all this means.

On the race track, Melisandre is a flat-out winner.

“Oh, she’s like a Cadillac,” said Arnason. “She reminds me of Escape Clause. She has tactical speed. She can head to the front or she can relax and stalk. She has natural talent and she’s beautiful to be around. She’s a really kind horse.”

Arnason will admit the partnership is taking its time with her. She certainly hasn’t been over-raced. This past winter she was moved to Turf Paradise where there was some thought given to racing her. Instead, she took the winter off and is probably the freshest stakes horse on the grounds. She’s also comfortable at any distance, from five furlongs to a mile, and perhaps even longer.

“Yeah, we took our time with her,” Arnason said. “She won that four in a row last and we were pleased with that. She was a small two-year-old but she has a great stride and she’s tough. We just didn’t want to push her.”

Arnason, who has 17 horses in total at ASD this year, has put together a solid team around the horse. Lise Pruitt is her third trainer in two summers. She started with Don Schnell, who wasn’t around much at the start of last year, so she was moved to Mike Nault’s barn. Now she’s being trained by Pruitt for whom Arnason has developed a great deal of respect.

“Lise is a really, really hard worker,” said Arnason who has spent his life in the general contracting business and also operates Arnason Farms. “She’s never had a lot of quality horses given to her but we believe she’s the right trainer for Melisandre. And we have also have Doc Elders advising her with the horse. He’s an old vet and a lifelong friend. It’s good to have Doc around. But I have to say, I really enjoy working with Lise. She does a great job.