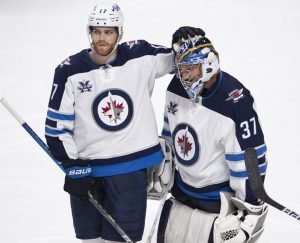 Winnipeg Jets goaltender Connor Hellebuyck (37) gets a pat on the head from teammate Adam Lowry (17) after their overtime NHL Stanley Cup playoff hockey loss to the Montreal Canadiens, in Montreal, Monday, June 7, 2021. (THE CANADIAN PRESS/Ryan Remiorz)

MONTREAL — The Winnipeg Jets saw their season come to an abrupt end Monday.

And while bitterly disappointed, they’re hopeful a surprising — albeit short — playoff run provided fans in a province slammed by the COVID-19 pandemic’s third wave a welcome distraction.

“I never would have thought this (series) would have gone four games,” Winnipeg captain Blake Wheeler said at the Bell Centre after his team was swept by the Montreal Canadiens in the second round. “That’s one of the most disappointing things … people have nothing to do and we were giving them something to do.

“We feel bad about that.”

They also gave them plenty to cheer.

The Jets headed into the first round as decided underdogs against Connor McDavid’s Edmonton Oilers. Winnipeg not only surprised many with a series sweep, but won three straight overtime contests, including a thrilling triple-OT decision to advance.

“After those Edmonton games, coming out of the rink and seeing our fans honking their horns and lighting up the city was … one of the highlights of this whole season and honestly the whole last 18 months,” Wheeler added. “It gave you a life again to want to do this for Winnipeg and put on a show for them and keep giving them something to watch.”

Manitoba has been battered by the pandemic’s third wave. Although the numbers are starting to improve, the province’s chief public health officer said this week hospitals remain strained, with dozens of intensive care patients shipped to other jurisdictions to free up bed space.

“It’s been a really hard year,” Wheeler said. “Winnipeg is code red and everything’s shut down and kids aren’t in school.

“My family feels that just as much as any other family. Even the economic impacts of that in our community are far-reaching.”

The Jets played without fans all season — the province allowed 500 fully vaccinated health-care workers to attend Games 1 and 2 against Montreal inside Bell MTS Place — while Manitobans have been under tight coronavirus restrictions during the third wave.

“If we could have gotten people’s minds off what’s been going on, then it definitely makes you feel good,” Jets centre Adam Lowry said. “It’s unfortunate that we couldn’t keep this good thing going and hopefully reach some later rounds that maybe we’d have some more fans in the building.

“We know it’s been an incredibly tough year for a lot of people, so we appreciate the posts — the tweets, the Instagram posts and just seeing people wearing Jets stuff around the city. We really appreciate the support.”

The Jets played in front of their first real crowds of 2021 for Games 3 and 4 at the Bell Centre — at roughly 12 per cent capacity — in Montreal, where COVID-19 rules were reduced last month.

“It’s such a special place, Winnipeg,” Maurice said. “It’s a fantastic home building and the crowd is different there than anywhere else. So you feel like you missed out on something.

“There’s been a tremendous amount of sacrifice from a lot of people over the last year and a half. It would have been nice to give something back and to have the crowd. It’s not just the Jets and the coaches and the players, it’s the fans, too.