Man Goes on a Joyride After Stealing Ambulance from HSC 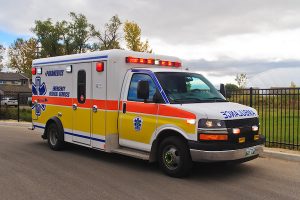 Winnipeg police have a man in custody after he stole an ambulance from the Health Sciences Centre on Wednesday afternoon.

Paramedics from the Brandon region were in their ambulance parked in the loading area of HSC at around 2 p.m. when a man approached them and asked for assistance. Police say the suspect climbed through the back doors and made his way to the driver’s seat, forcing the paramedics to exit the vehicle for their safety. The suspect then drove off.

Police say the suspect made his way to the 1500 block of Wall Street and crashed into a parked vehicle. He abandoned the ambulance and fled on foot to the 1300 block of Downing Street, where he smashed residential windows and stole an axe from one of the yards. A homeowner confronted the suspect and had an axe swung at them, but the suspect luckily missed and ran away.

Officers found the suspect, still armed with the axe, in a residential backyard and took him into custody. No injuries were reported.