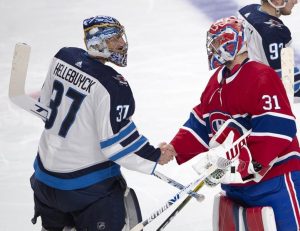 WINNIPEG — The season ended with his team being swept in the second round of the NHL playoffs, but Winnipeg head coach Paul Maurice says he’s proud of the job the Jets coaching staff did this season while playing in a global pandemic.

Winnipeg (30-23-3) surprised some pre-season prognosticators by finishing third in the North Division standings. After sweeping the second-place Edmonton Oilers in the first round, the Jets were swept by the fourth-place Montreal Canadiens.

Winnipeg played the final three games of that series without leading scorer Mark Scheifele. He was suspended for four games after his crushing blow on Montreal forward Jake Evans in the Canadiens’ series-opening 5-3 victory.

Evans suffered a concussion and left the ice on a stretcher after being hit by Scheifele following an empty-net goal with under a minute to play. Scheifele will serve the final game of the suspension at the start of next season.

“I understand in my job you’re always going to have your critics and a beautiful part of pro sports is the passion of the game,” Maurice told reporters Friday. “But I’m really proud of the job I did and this staff did this year under incredibly trying circumstances.

“I’m really proud of it. We did a good job this year.”

“Now, when you’re not sitting here with (the Stanley Cup) beside you, everyone is certainly critical in the end,” he said. “Probably no people (are) more critical than the coaches themselves.

It marked the fourth straight year and fifth time in Maurice’s eight seasons behind the Jets’ bench the club had reached the NHL playoffs.

“The next stage is, I guess, feeling like you would if you were one of those teams the media pick (as a perennial Stanley Cup contender),” said Maurice, the second longest-serving current coach in the league.

“I don’t think we were quite there this year, I don’t think that was the sense going in . . . but I think we’re moving to that.

“Maybe closer to it now than we have been at any time.”

Maurice gushed about the togetherness and strong bond the Jets have established with their core.

“The culture in our room right now is as good as it’s been since I’ve been here and I think that’s priority one for your job as a coach,” he said. “I think we have more players invested in Winnipeg now than we ever have.”

Cheveldayoff said he has already started the process of re-evaluation and review while preparing for what will be a busy summer.

“But obviously it’s evaluating where things are at and what you have in your stable of players moving forward and what directions and actions you need to take for the future.”

Maurice held exit interviews with his players after the Jets were eliminated, but said he’s not had to have such a chat with Cheveldayoff.

“That exit interview or conversation with Kevin is a daily,” Maurice said. “And it’s going to happen five or six times in the next two weeks about where we’re at, what he saw, what I saw, where we’ve got to better and where we are doing into the future.

“This is a daily conversation that’s happened every day since I’ve been here.”

Despite the disappointing end, Cheveldayoff deemed the Jets’ season a success but added he’s not about to rest on those laurels. Cheveldayoff experienced the elation of winning a Stanley Cup in 2010 as assistant GM with the Chicago Blackhawks before joining the Jets in 2011.

“If you look at it from an ultimate end goal, we’ve got to get better,” he said. “You challenge yourself all the time and you’re never really truly satisfied or truly successful in your own mind unless you do win the Cup.

“I’ve been fortunate to be on that side of it where you do get to say, ‘Hey, we did it.’ But again moreso than not there’s times where you say, ‘We’ve got to get better.’ We’re going to have to spend all summer and approach training camp in that same fashion. As a group, as an organization, you’re always striving for that.”

A big part of Winnipeg’s success this season was stalwart goaltender Connor Hellebuyck. The 2020 Vezina Trophy winner was 24-17-3, posting a 2.58 goals-against average and .916 save percentage.

“Our forward group is maturing into a really good forward group. Our back end has to catch up to our goaltending but not everybody has all of the pieces all of the time so we’re in that process of building that.”